Almost there. The little cherub needs some minor putty work, but I really like how he interacts with the Guilder: 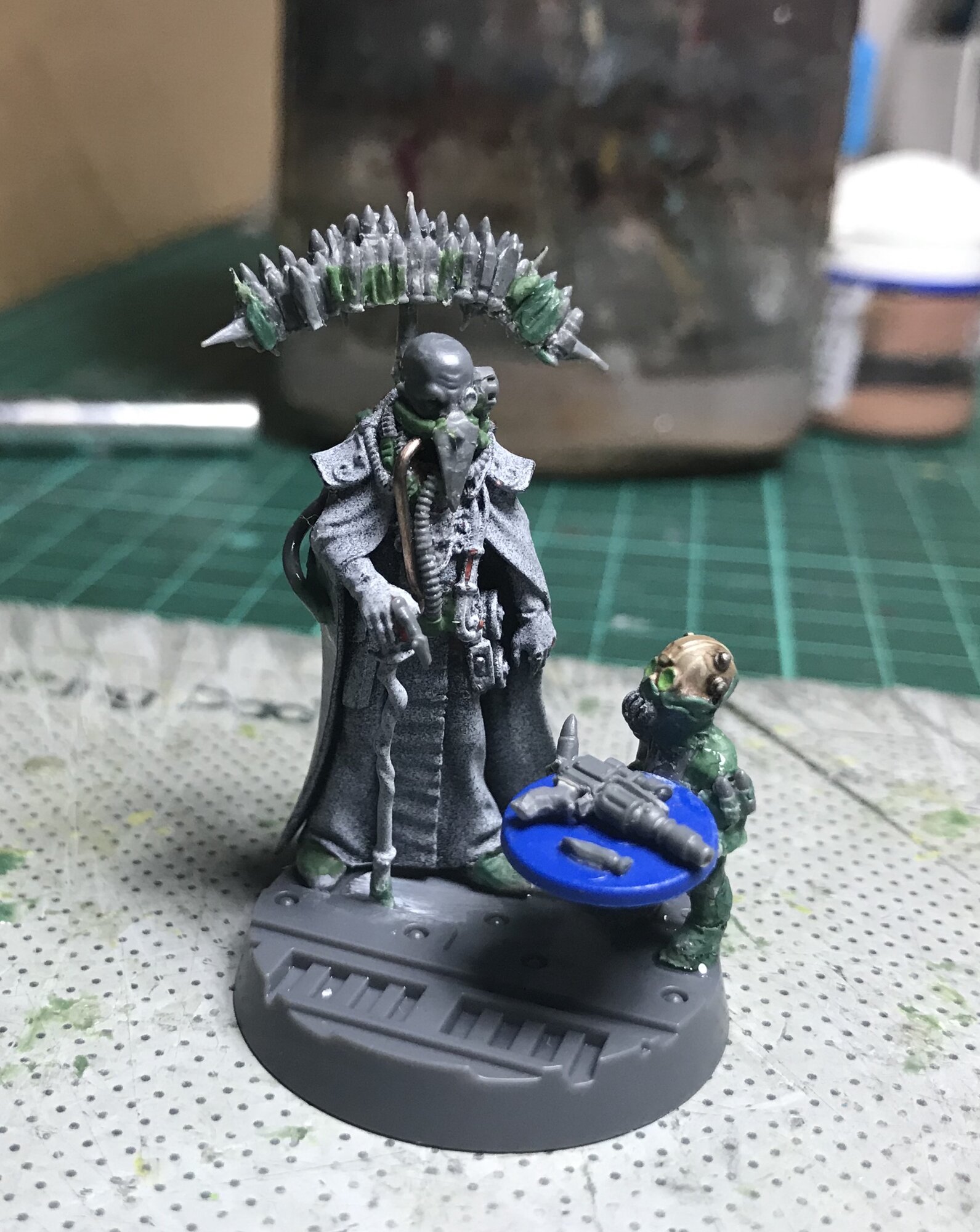 Iron Guilder, heavily inspired by Artwork from the Book of Perils
Here‘s the whole group. Iron Guilder with cherub and two Hive Scum mercenaries to ensure there is high demand of bullets: 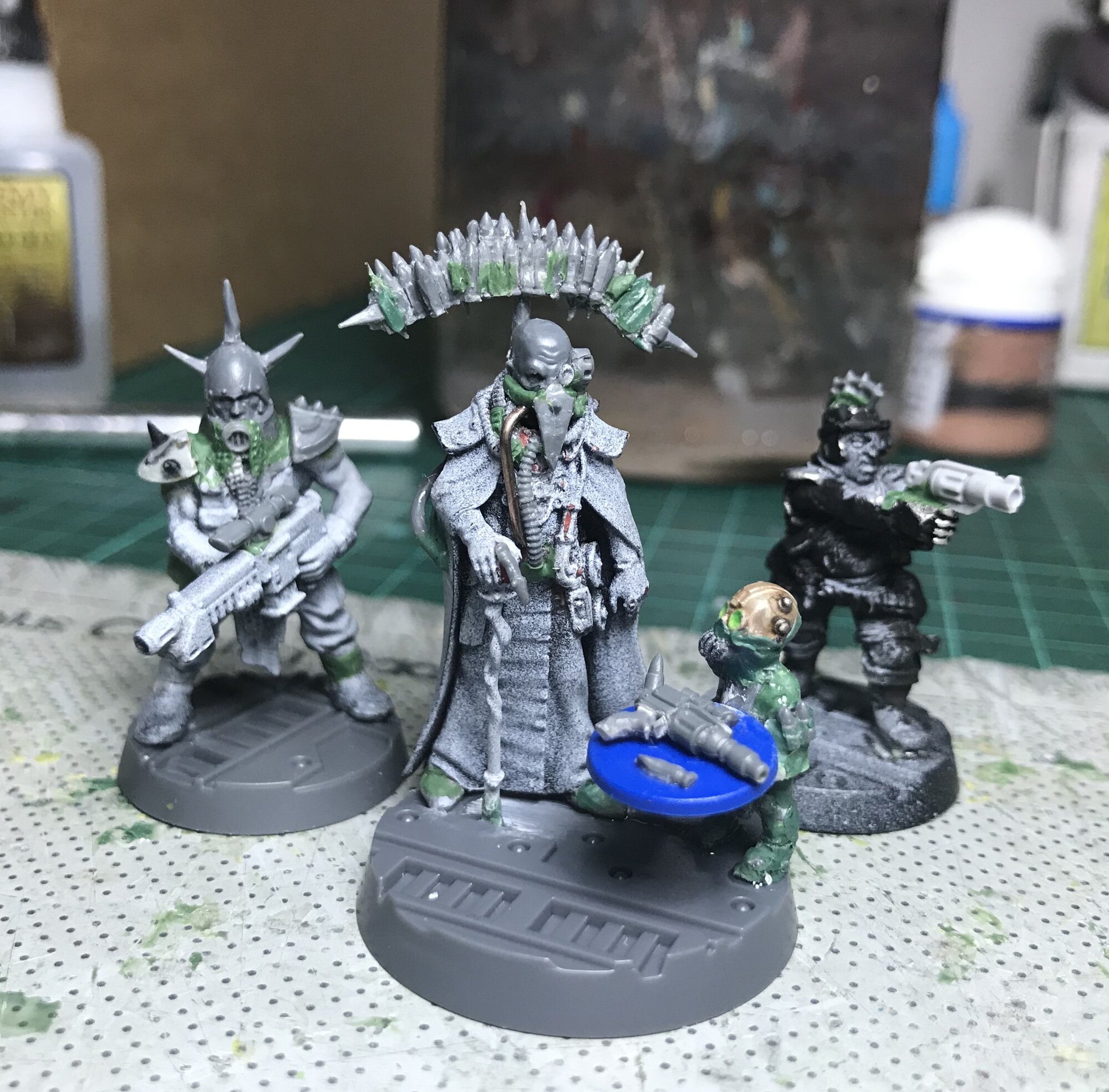 Iron Guilder w/ retinue (Hive Scum, cherub)
If I manage to prime them soon, there‘s a slight chance I might actually paint them before I leave for summer vacation. Fingers crossed.
Reactions: Edster, Gorgeous Leroy Dukes, Jacob Dryearth and 16 others
M

Looking great love how similar you got it to the original artwork
Reactions: Sobek
M 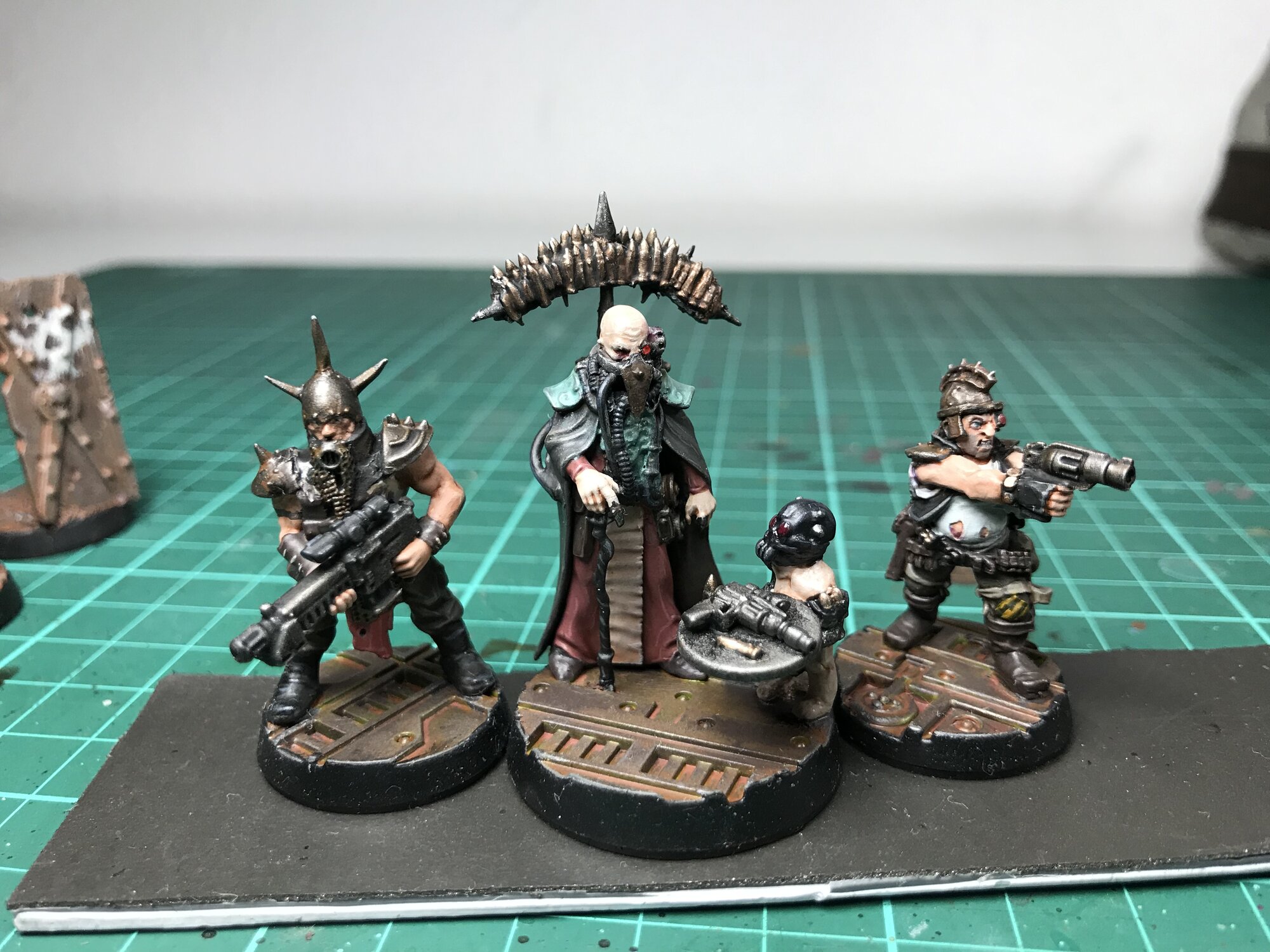 FINAL VERSION
EDIT: Made some smaller corrections after checking below photos.

The Iron Guilder is based on the artwork from the Book of Peril. 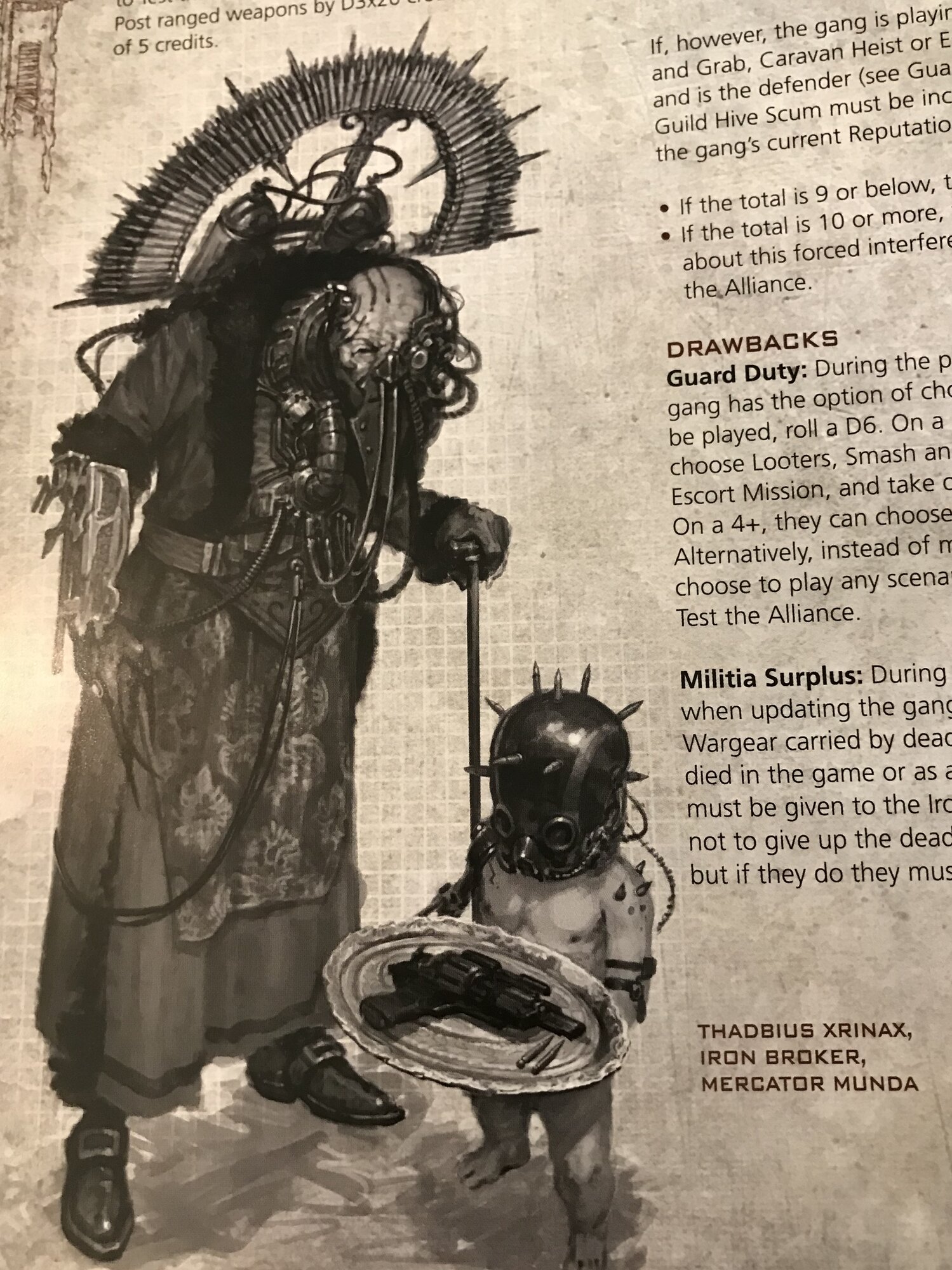 As the rules state that allies to the Iron Guild may find their gang accompanied by Hive Scum, that‘s what I made for his retinue - nothing says „buy bullets“ like a couple of lousy shooters, right?

Guilder is converted from the Blackstone Fortress Navigator, head from the Empire Flagellant kit. Bullets from various Ork guns or made from putty. 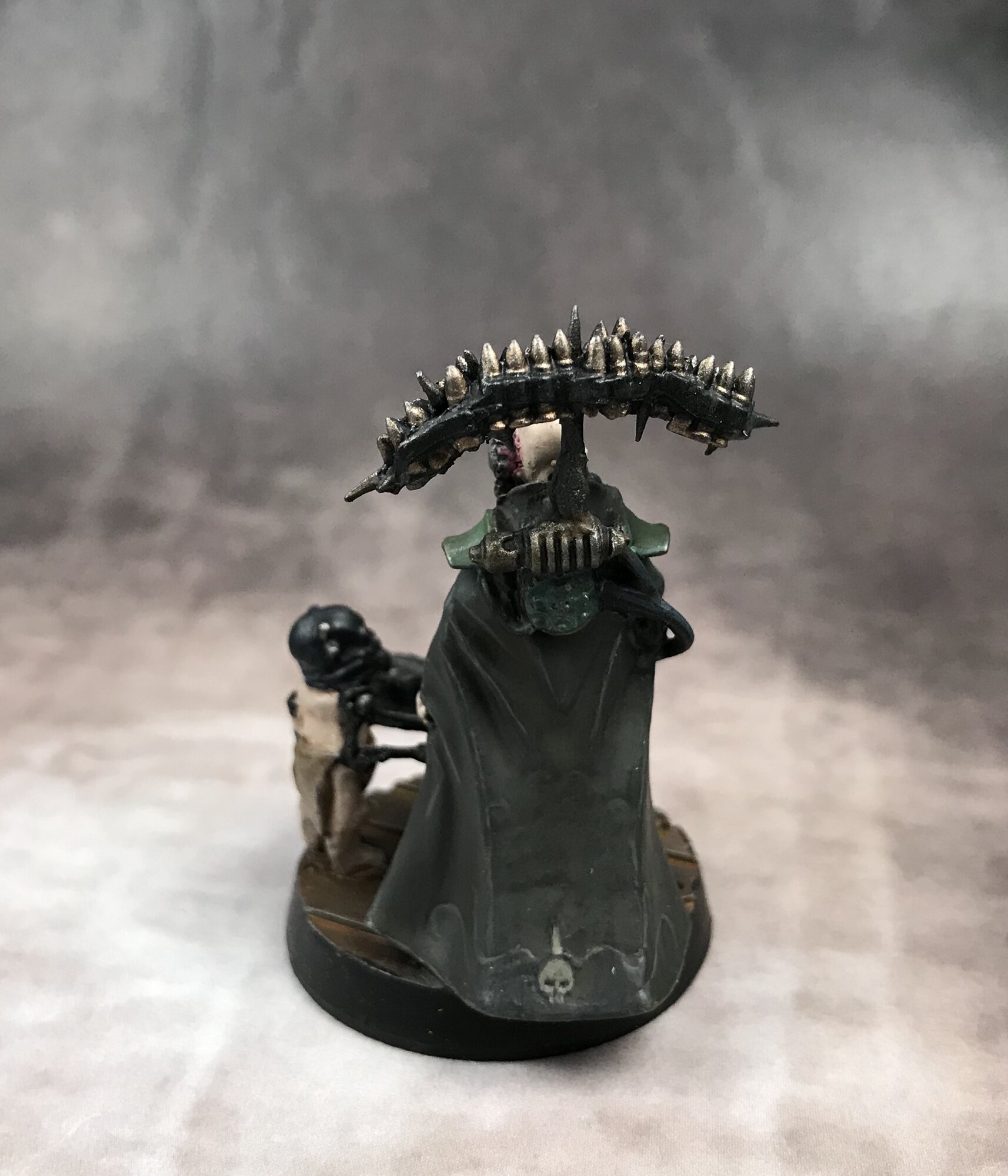 Iron Guilder, inspired by Book of Perils artwork, back
The cherub is based on, well, a cherub from some Space Marine set (Devastators?), his head coming from some AdMech kit (Rangers or Dunecrawler). For the pistol on a plate I combined an Orlock stub gun and a Cawdor pistol (iirc). EDIT: Cawdor Handgun (the one with the tiny scope) plus AdMech Skitarii Pistol for cylinder and barrel. 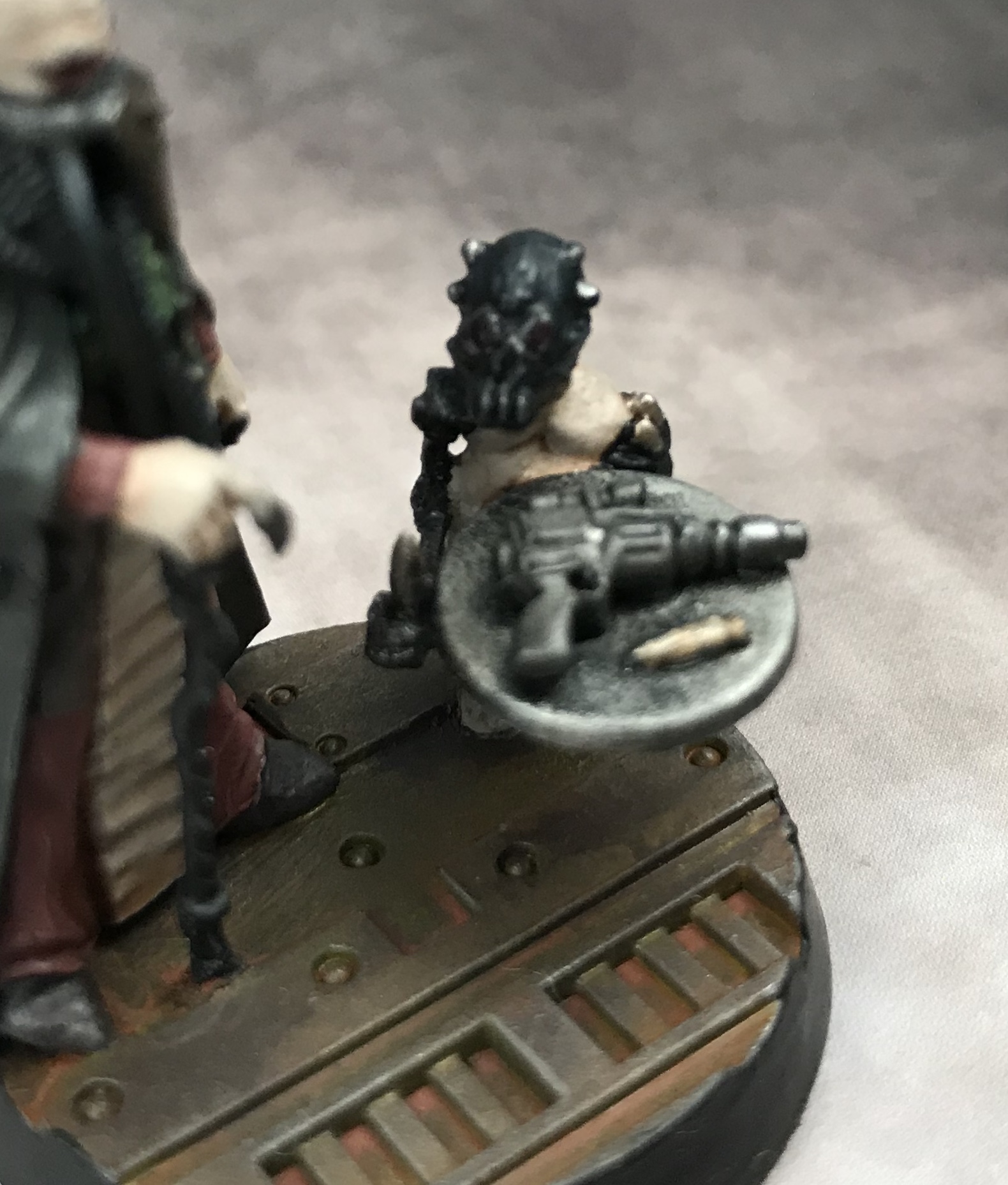 Retinue is an old Hive Scum mini with a Goliath crest and plasma pistol replaced with a stub gun. The other guy is based on a chaos cultist with an old bretonnian man at arms head. I like to call them Bebop and Rocksteady. 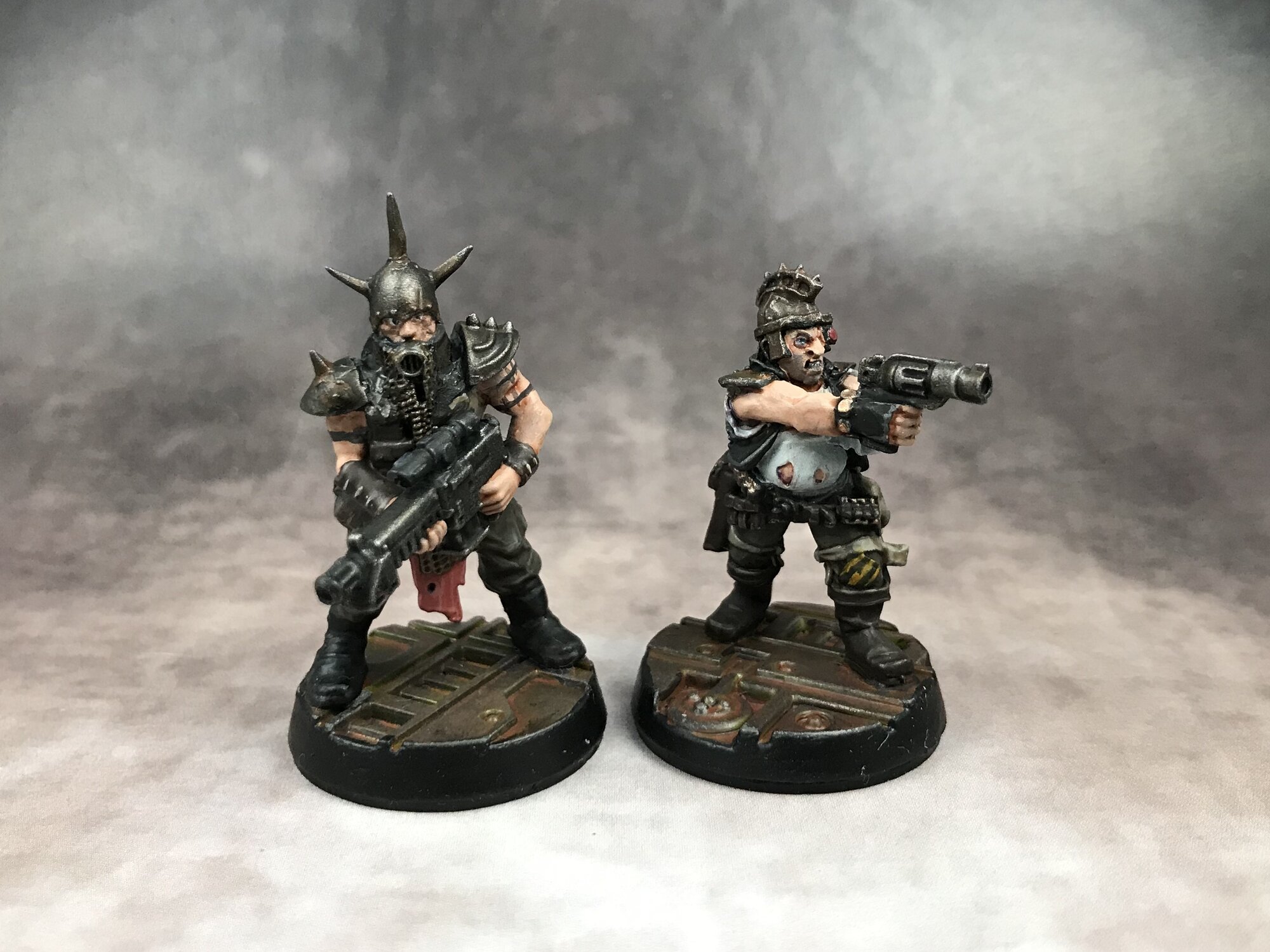 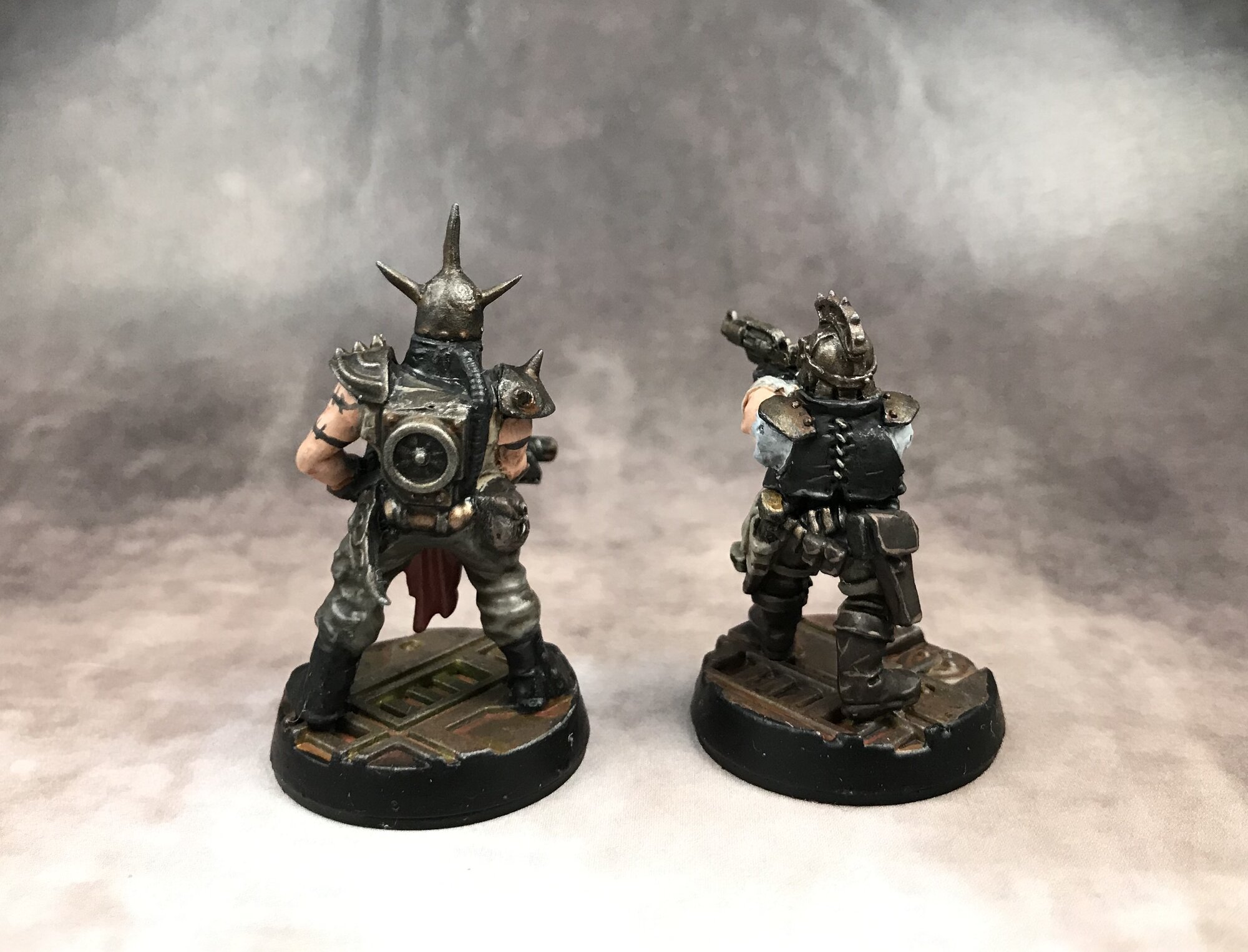 Beautiful. Mine won't be painted (surprise surprise) but I'll have it up later tonight.
Reactions: Sobek

Ok, I may not be the best at things but I feel like I can make a scene.
So here we go! 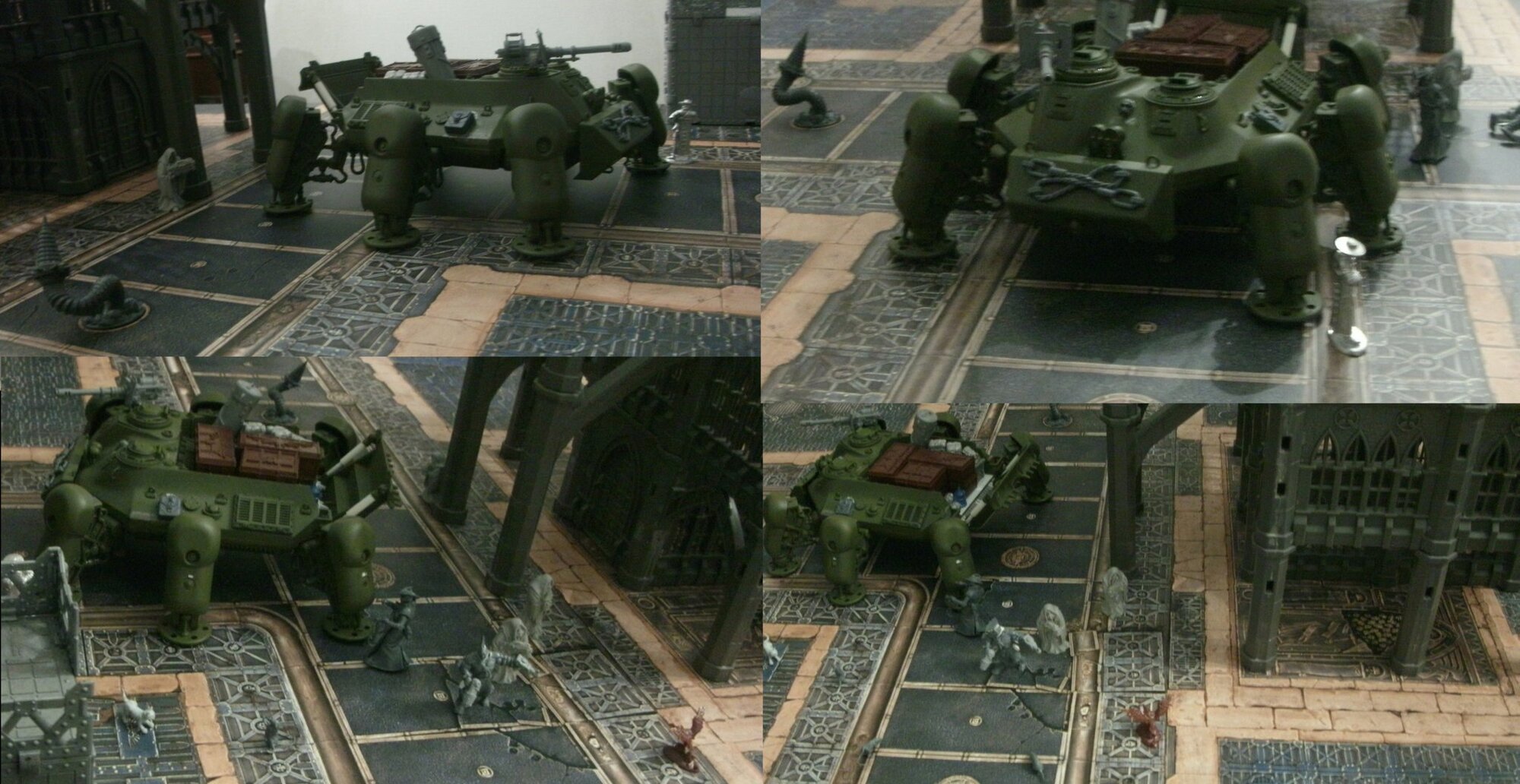 More pics in my thread but the gun and everything in the back is removable as well, the ramp is boxed in and fully functional.
Thanks for looking!
Reactions: maxwellrpower, trollmeat, Ben_S and 6 others
M

We have til the 11th of August right?

I guess so. But I will be off for the holidays soon, so I went with the flow and finished earlier. Didn‘t think I would get that painted anytime soon at all, so thank you, YakComp!
M

Yeah. And I haven't even started painting anything in at least 6 years... but I did just order some contrasts, so we'll see.

Group shot photo edited after some more painting. Now they shall be stored away so I can litter my desk with other stuff.

This was a fun challenge, trying to re-create artwork in miniature form.

Hope the other participants are having at least as much of a good time as I had! Looking forward to seeing yoar stuff!!!
Reactions: trollmeat
M

First draft of my guilds fluff, comments and criticism welcome. I take it noone has the rule book style page as a template...?

Apologies in advance for the spelling punctuation and grammar!

The machine guild regulates the trade and production of servitors, whilst Lord Helmwar may play fast and loose with many of the imperium's laws, the ancient edict banning thinking machines is not one of them. Servitors are key to many from simple monotasked servo drones that survey the miles of piping and duct work of the hive, through to the feared and cyborg assassins unleashed by the houses on each other in times of strife, the machine guild supplies and controls them all.

Almost by default the machine guild has strong links with the adeptus mechanicus with many of their menials and artisans inducted into the most basic tenates of the cult. This almost inevitably leads to members of the guild being heavily augmented as they begin to see the flesh as weak and needing to be replaced.

The machine guild often has business in the underhive. The rogue gangs of servitors which stalk the badlands are pointed to by the slave guild as proof that servitors can no more be trusted than their human slaves. The guild regually sends bands into the underhive to purge this groups before word of their existence can seep back uphive. Whilst purging a nest of rogue servitors may well be a welcome service it is the machines guild's other business in the underhive that has created their reputation as feared monsters, human beings are one of the key resources of necromunda, but even on a planet of billions even this resource is finite. Whilst the machine guild takes much of its supply from necromunda's prisons or specialist growth vats sometimes this just isn't enough. In times such as this the guild may dispatch enslaving parties to the underhive. Equipped with rudimentary mobile surgery facilities and enough firepower to subdue the small settlements that exist outside the protection of any house or guild these parties are one of the worst of the underhive's bogey men, for whilst their are miriad ways to die in the underhive, ending your days trapped inside an augmented body unable to escape act outside your simple programme is for many a fate worse than death.
Reactions: Aulenback, CaptainDangerous, Sobek and 1 other person
M

All done bar varnish and the inevitable touch ups!

As the weekend will no doubt get away from me here is my entry in the event I don't get the chance to get some more pictures. Anyway here they are negative filters.

I didn't come up with anything particularly inventive for this. To tell the truth, I'm still not sure how clear I am on the 'brief' given that I don't play N18. However, here's some stuff that I made and painted during the competition period, so I'm going to call it my Frostgrave corpse guild: