So I have 2 possible ideas. First, I am feeling inspired by @ClockworkOrange 's section of Fury's Rest. Maybe I could make a 3d map and match the fluff to fulfill the comp. Second idea, in might be neat to explore what an Underhive market looks like.

But I will have to look at whether I have anywhere close to the materials that I need before putting a pledge down.
Reactions: CaptainDangerous and trollmeat

I'm still not ready to take the pledge but here is my initial thought process on my WIP thread.

A big conundrum is their backstory/theme. I like the idea of a delaque gang as "totally-not-the-mafia". But the models look so down and out. Do I neaten up their clothes at great effort or give them a different theme according to their appearance?

Gorka and mordheim are both valid settings (this has been a running theme since day one of the comps I believe). But you do need to tie it in with the theme. So a riverside dock in the ruined city would be fine, or a dessert outpost scrapper with heavy crane for lifting scrap off the back of the trukks the boyz have brought back. These all fit within the theme but are specific to their own game system.
Reactions: Biggle_Bear, trollmeat, CaptainDangerous and 2 others

A highway robbery mordheim style? Could fit any setting really.
Goods are definitely being unloaded from one cart and put in another.

Then again I do have 2 landing pads to build for August to play some Inquisitor 28mm on. So that will probably be a better use of my time while fitting in with this.
Reactions: trollmeat and CaptainDangerous

i don’t get the confusion?
Iv never said other settings can’t be used!
Necromunda is preferred and all else is permissible as long as it fits the theme!
(...which, this time, lends itself to necromunda)

CaptainDangerous said:
i don’t get the confusion?
Iv never said other settings can’t be used!
Necromunda is preferred and all else is permissible as long as it fits the theme!
Click to expand...

I guess the confusion is what 'preferred' means here. Do Necromunda entries get bonus yakpoints?
Reactions: trollmeat, CaptainDangerous and MedMos

CaptainDangerous said:
i don’t get the confusion?
Iv never said other settings can’t be used!
Necromunda is preferred and all else is permissible as long as it fits the theme!
(...which, this time, lends itself to necromunda)
Click to expand...

I guess the confusion stems from this new style of competition organization, and the 'Necromunda preferred'-tag. Peeps just wanna make sure, such qualifiers weren't prevalent in earlier comps (says the guy who's entered like 5 times...).

@Ben_S
I suppose so, yeah! An extra *counts on fingers* 10 bonus yak points!

When the theme was discussed and decided on, we had necromunda in mind!
As a necromunda community, I don’t see why this is wrong!?
I’m not against other settings!!

And Remember, it is the greater yak public who will decide the winner!

I'll give it a go, time will tell how much cargo I can produce.

I, the glorious shriken, will be entering Yakcomp 33: “Crossroad Junktion”. I hyve no idea if i will have the time for finish something, but
if i make something you will found my work here: https://yaktribe.games/community/th...unda-more-conversion-paint-competitions.5396/
Reactions: Scavvierising, Punktaku, trollmeat and 1 other person

Think my landing pad might be a grav-taxi rank. Such things are bound to exist in the spire, right?
Now where can I source empty deodorant bottle's?
Reactions: Punktaku, Kommissar Shriken, Biggle_Bear and 2 others

I, @trollmeat, will be probably not be entering Yakcomp 33: “Crossroad Junktion” with any entry, despite the multiple concepts I’ve come up with, but my previous abandoned attempts and future failures can be found here: 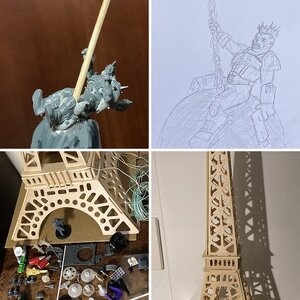 The main contenders for actually being attempted were:
1) “Shit’s Creek Ferry/Barge” - for this I was probably going to spill some pva glue all over the place, maybe drop some superglue on it, and build a barely flowing creek/river with debris and a half sunken barge. Think the River Ankh, where you could pretty much walk over it the water is so solid.

2) “Stargate” - from the show Stargate. It’d be a transport hub... but busted and crapped up and basically another piece of archeotech...

3) “Teleporter Nexus” - from Advanced Space Crusade. Just imagine exploring a new dome and stumbling across a teleporter node or nexus ”What is this strange growth?” then having a full sized Tyranid Ant stomping at you at full speed :-D

Main problem(s) with the Nexus is that it kinda isn’t for Necro/gork/mord, and the only “upcycling” in it would be the base it is built over and maybe a few tubes from things... 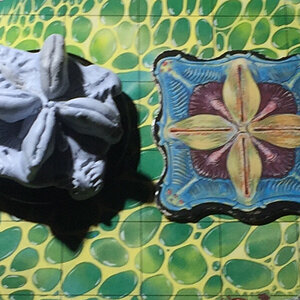 I have to bow out early too. I've realised just how long my unfinished stuff is. If the Finish Your Stuff Challenge accept off brand project then maybe that's where I belong for a while.
Reactions: trollmeat
B

Whatever you do for the competition can also be submitted for your FYS Challenge, provided it meets the normal requirements.
Reactions: CaptainDangerous, MedMos and trollmeat

We added a couple of extra weeks onto this one, so there’s still tons and tons of time left! Don’t rule yourselves out just yet!
Reactions: trollmeat and MedMos

That’s right! 90% of my YakComp “entries” are only entered in FYSC’s. (Actually, it might be an even higher percentage...)
Reactions: trollmeat

I started the comp! Yes, I am trying to be on the ball here, not slapping paint on in the last hours before the deadline.

A few pictures, there are more words in my plog, and will be more progress soon (using the common definition of 'soon', which is 'later').

Nobb and Hobb ready for basing and primer.

I, @Deagle , will be entering Yakcomp 33: “Crossroad Junktion” with my entry ‘Dog Town Tube Station’, and will keep an updated work in progress here:

One Week to go!
Tell every yak you meet, and prepare your Yakday Project!
(Iv tried to understand time, and discovered I can’t! So to give everyone around the world a full 24hrs, the event will actually begin at 12 noon gmt on Saturday 11th April, and end at 12 noon gmt on Monday the 13th!)

GREETINGS YAKS! im going to keep this one simple.... 12th April 2020 Yaktribe is turning TEN years old and, as a Tribe, we should all celebrate! Starting from when the Sun rises in the East and until it Sets in the West, I would like each and every yak to post something here, in this thread...