I've been sorta busy, but I'll write up something on my entry tonight, so stay tuned (?)
E

I have got as far as I can on this journey! Really pleased with my results 10/11 hangers-on for the House of Iron with additional exotic pets (not hangers on boo!). 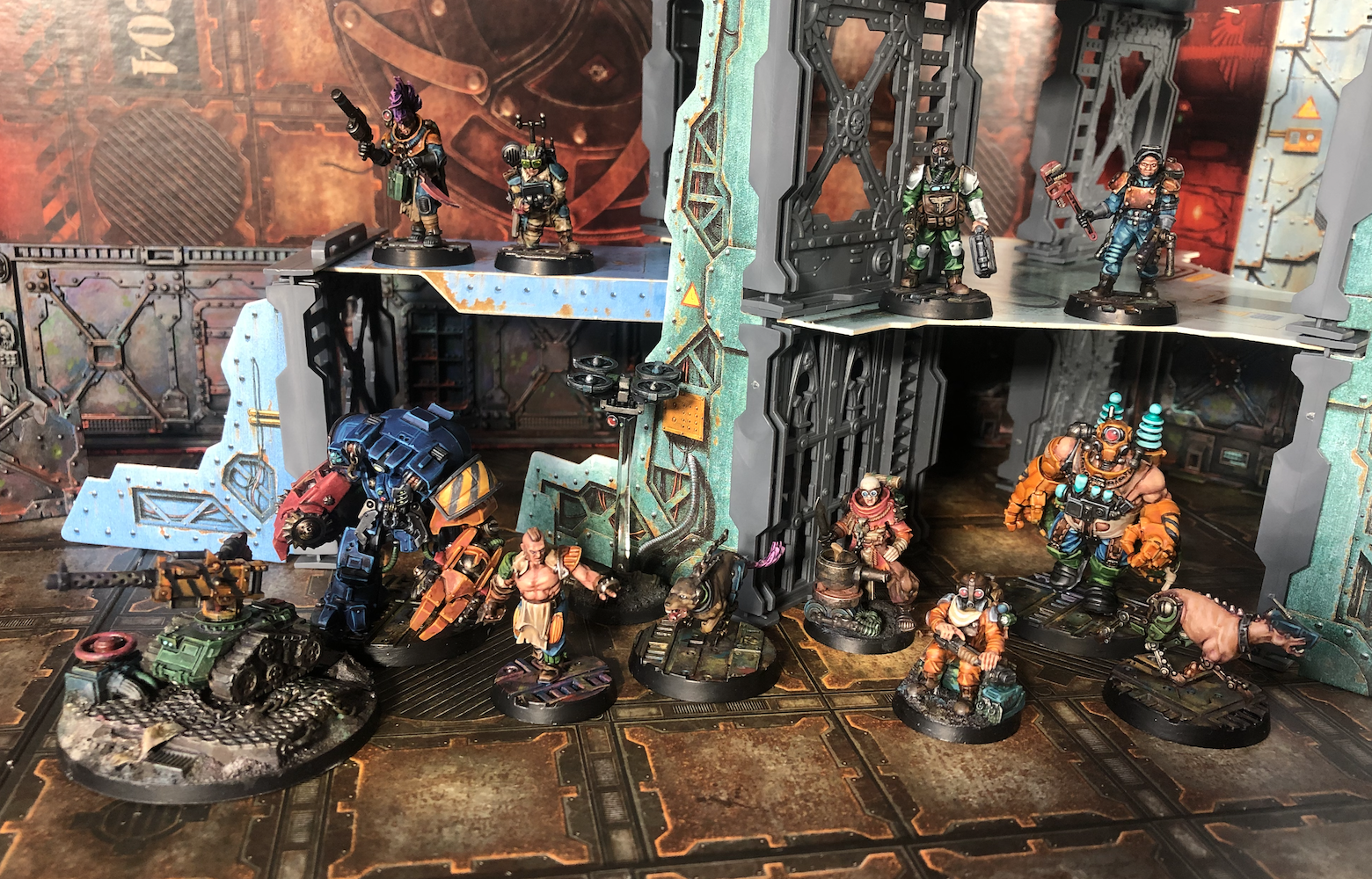 hangers on for House of Iron
Nearly had the full house, but ran out of resources. Try hard 1st person back story in the thread below:

Edster Comp thread - The Quest for the Holy Trinity of Crowns

The dust is blasting my exposed face as I stare across the desolate ash wastes. The vast landscape warps and blurs at the edges of my vision where the blighted ash desert meets the grey stricken sky. Maybe a metaphor for my mind state. Bleak and Empty. Something tugs at my subconscious. What...

If you don't dislike it I will continue this thread until the holy trinity has been absolved... although I'm imagining it will take a long time and much more blistered painting fingers...

Good luck to you all!!
Reactions: Crazy Ivan, Coenus Scaldingus, Casus and 5 others

Here's my entry for YakComp 37:

Scamorovich, the best Bullet Merchant of the North Hive*.
Scamorovich is a bit of a recurring joke in our game group. Whenever your ammo mysteriously fail to hurt a three-legged rat, when you go an entire game not even touching anyone even with newly-set bolt pistol sights, when your lasgun power packs inexplicably fail in clouds of bacon-smelling smoke? You got your ammo from Scamorovich. The bastard sold you another box of defective bolt shells, skimping on both gunpowder and actual fyseline.
How does a bastard like that even stay in business? Any self-respecting leader who's been a victim of his "premium-budget ammunition surplus", you take your best gunslingers, and stop down to give him a good shouting and your creds back. Forty-five minutes later, you and your gangers are laughing, leaving the bullet merchant's most recent warehouse hideout with a box of autogun rounds you got an amazing deal on, not realizing what just happened until several hours later. And to be fair, most of that all is probably serviceable enough. Probably. 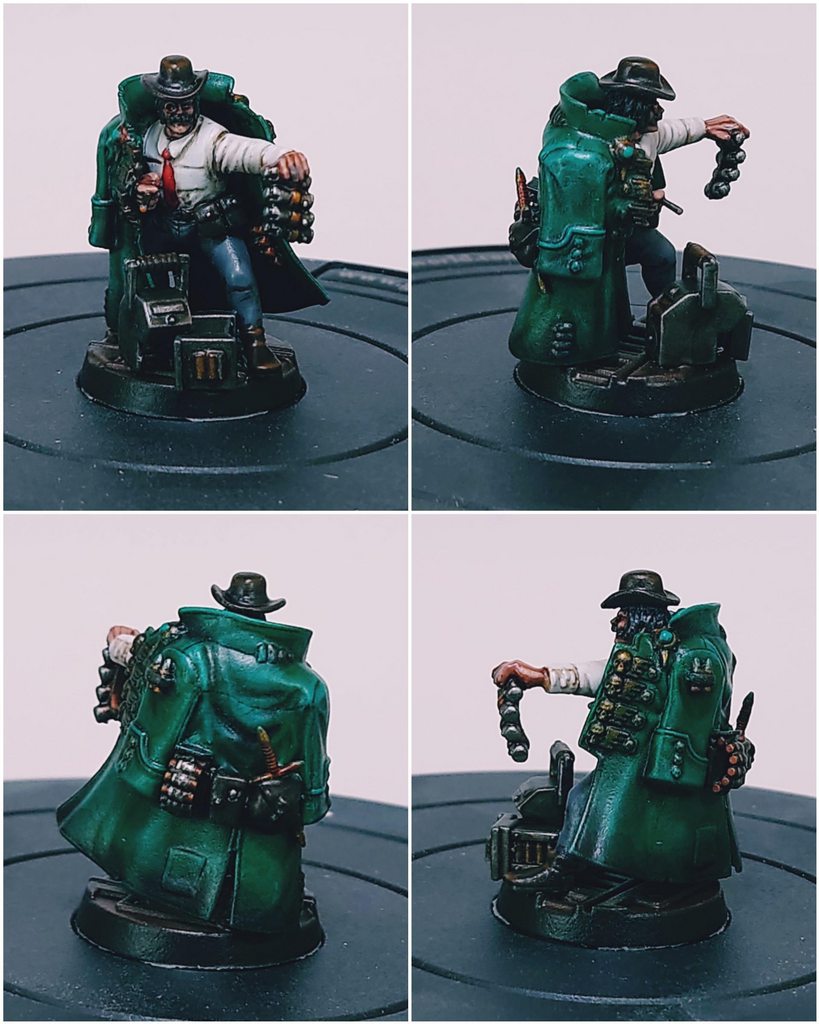 Here is my entry for yakcomp 37 as I am unlikely to get any more done before the deadline.

To be clear the entry is just the model in the middle and his table of wares, the other two are just fighters for my Orlock gang that I have completed alongside the bullet merchant. 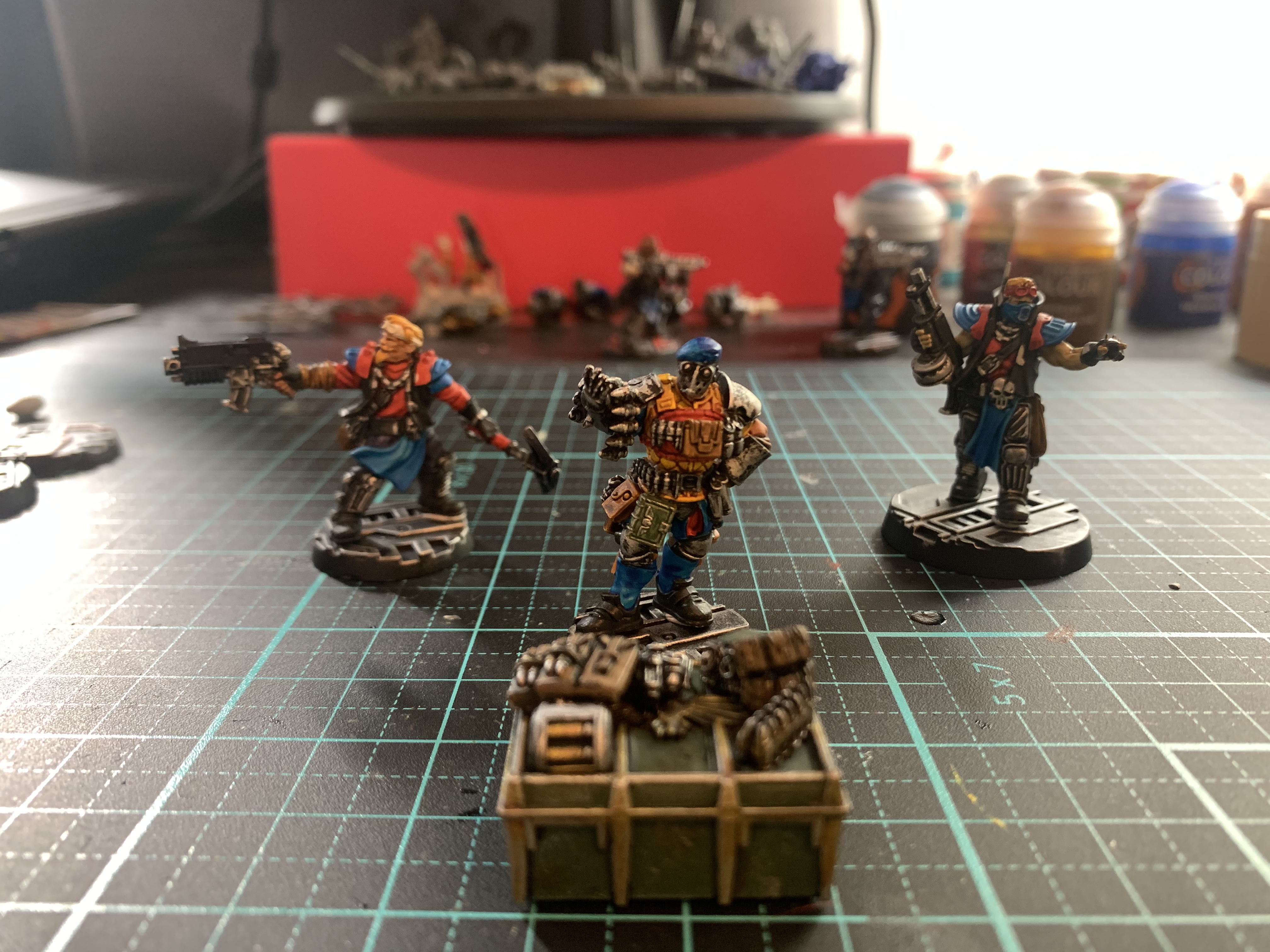 Edit: I have actually converted and painted another mode today to stand alongside my bullet merchant so have an update to my entry.

I give you my prize fighter and bullet merchant ready to help out the X-Calibre gang. 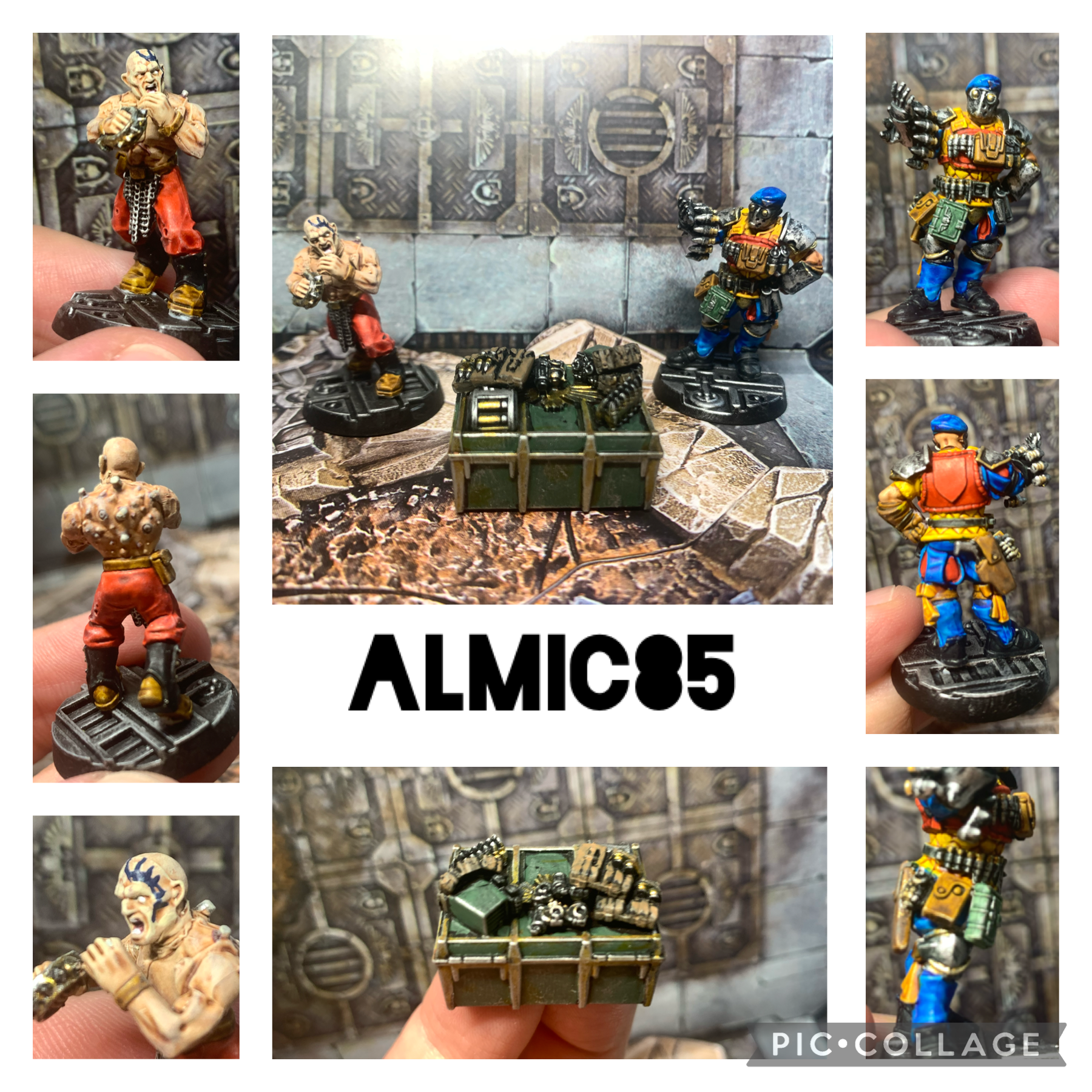 He seems to be a really nice chap, a man of the trade for sure.
I just don't want to imagine what a box of Frags or Rad-Rounds from him do and behave.
Reactions: Pagumb

You crazy kids, finishing in advance of the deadline.
Reactions: SirFrog, almic85, MedMos and 1 other person
P

Hawkins44 said:
He seems to be a really nice chap, a man of the trade for sure.
I just don't want to imagine what a box of Frags or Rad-Rounds from him do and behave.
Click to expand...

Well they don't call him "Reliablorovich".

He probably has one (or more) of those propagandist supplied truthy slogans..."Scamorovich's Ammo & Ordinance...someone always gets hurt!"

Troubled Child said:
You crazy kids, finishing in advance of the deadline.
Click to expand...

This is where I'm at, as of tonight. 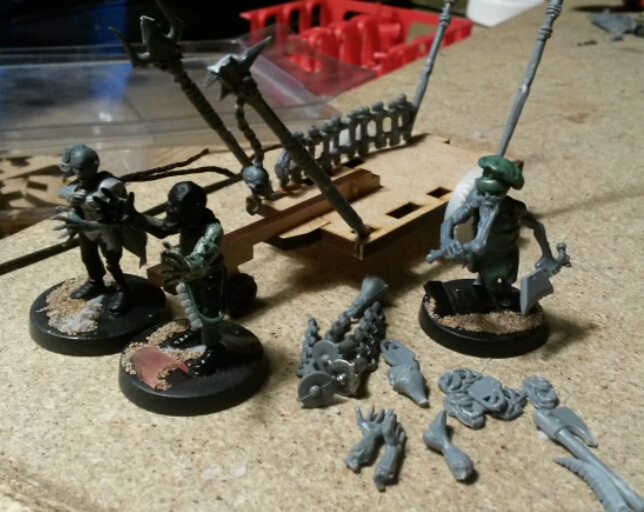 Good to see locavore traditions have continued into the future.

He probably has one (or more) of those propagandist supplied truthy slogans..."Scamorovich's Ammo & Ordinance...someone always gets hurt!"
Click to expand...

Well I added an extra model to my entry today as I was having a slow day at work.

New entry photo is in my previous post and I am looking forward to actually using these two models alongside my Orlock gang in my upcoming campaign.
Reactions: Pagumb and MedMos

I'm happy to announce the replacement figure, Lt. Sinestra Hortt, is fully painted. I'll make some finishing touches, and you can expect the official finish entry coming up once I make some photos.

This was the original miniature intended for this theme, that wasn't shipped in time, with a month-long delay. 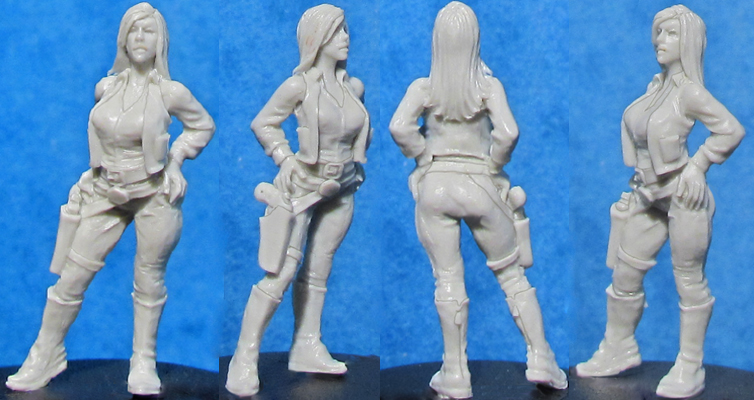 There was about 115 thing that got in the way of this project. So I guess I'll enter the final painted image for now. I was supposed to make a few more accessories, but I am not sure I will be able to finish it by tomorrow.: 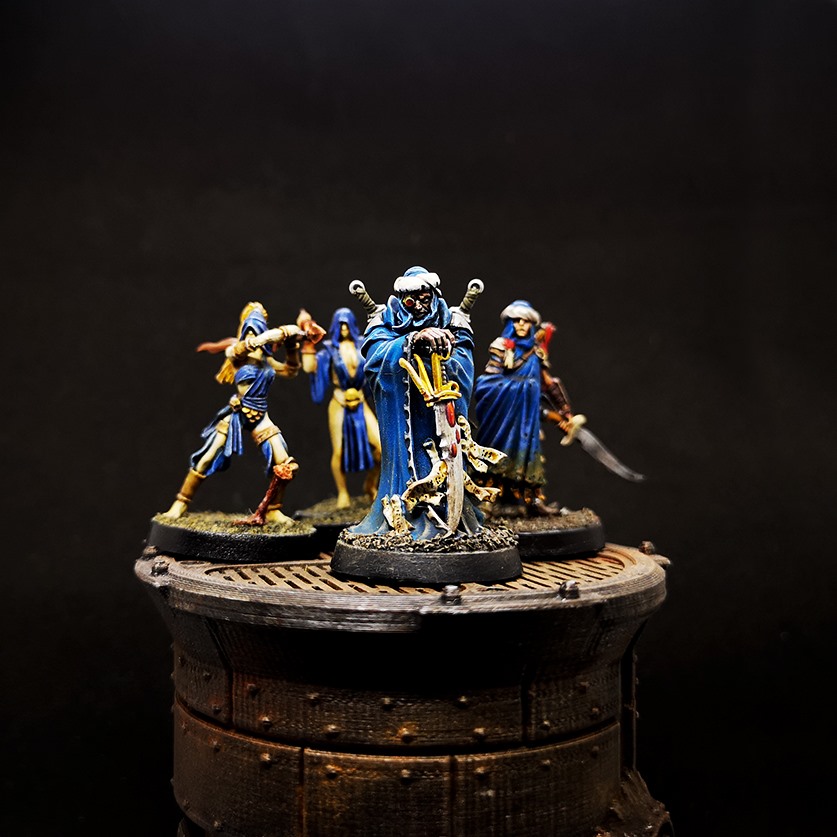 X’agg “Air Rated” Knews, Propagandist to the Starrs (and others)

As gaunt as his prose is sparse, the propagandist X'agg Knews grew up in a large slime farming family at the edge of the sump sea and the wastelands. A childhood of hard labor spent between scraping the slime off the underside of slabs of surface crust and then joining his parents selling it in the larger settlements taught him both the value of a good story and the power of an “enhanced” one. Soon X'agg was writing the market pitches for local slime sellers singing the praises of their slime while also writing the leaflet copy that smeared and disparaged their competitors.

Now an established propagandist, X'agg works hard to balance the threats against himself by carefully picking who he works for and how far he goes with his messaging. Pictured in Print Shop #12 prior to its destruction due to a sewer line leak engineered by an angry guilder, X'agg is often mistaken for the ink stained staff working in such facilities and he does nothing to discourage such mistakes since it has saved him more than once when either a dissatisfied customer or an enraged target of his work has come calling. 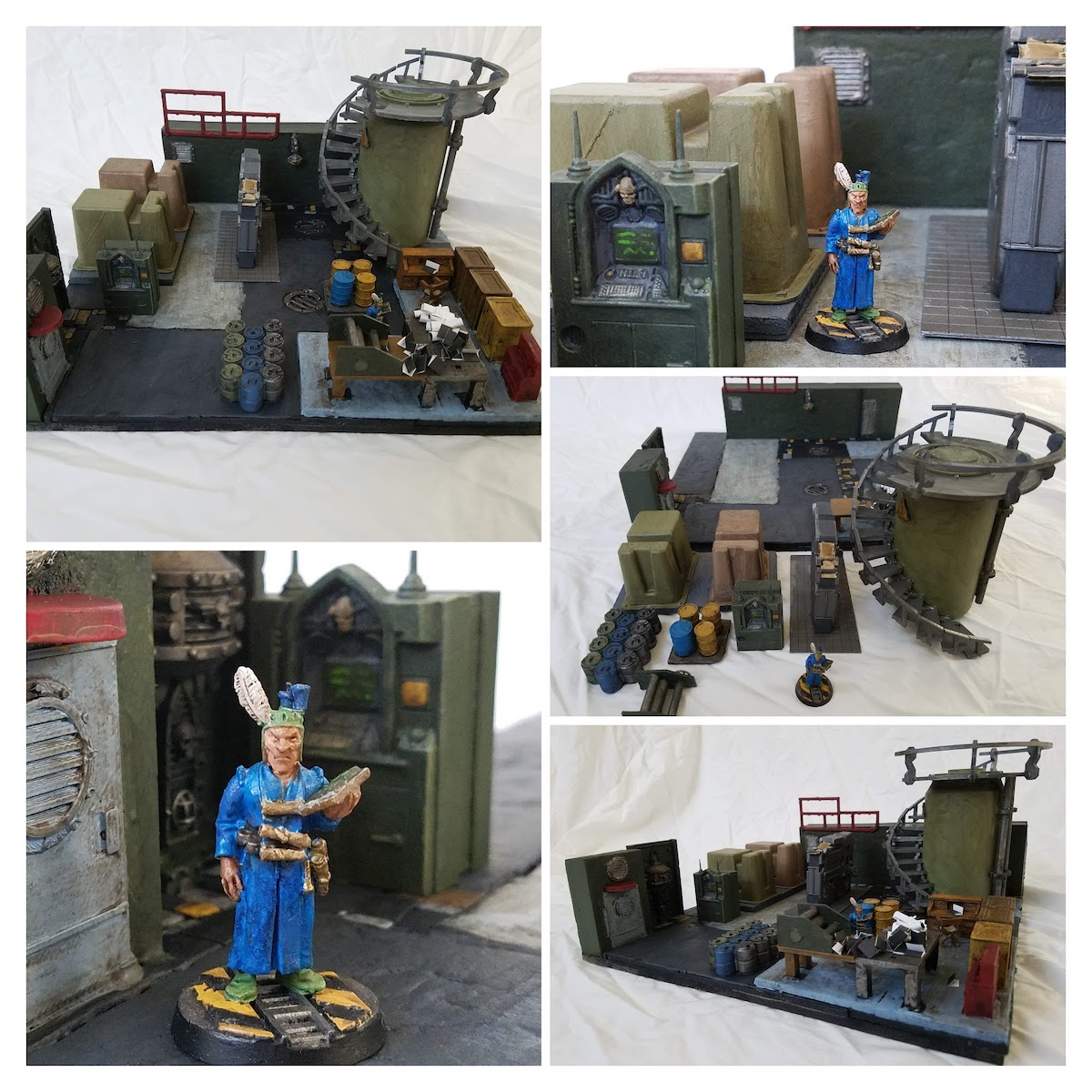 "Central, this is Echo-012, we have 10-80, suspect heading nortbound over Sump Avenue in a blue vehicle, suspect presumed armed, requesting backup, over!" 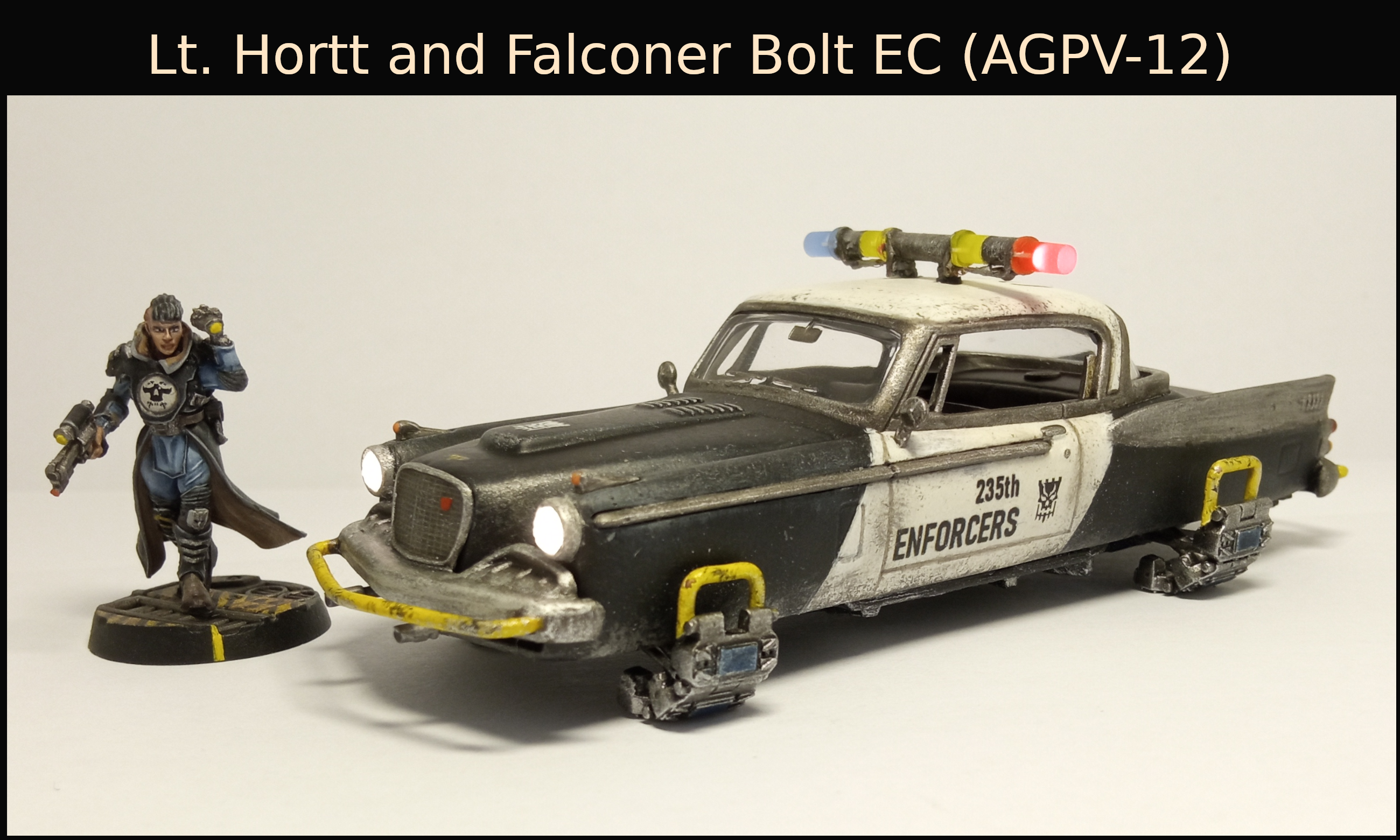 Lt. Sinestra Hortt is a skilled investigator and detective, and one of the few people certified to pilot the Bolt EC model. She sometimes involves herself in arresting the suspects and convicted criminals she helped to track down. Some criminals need only a rumor of Lt. Hortt being after them to run in fear, yet it is known a very generous bounty on her head was placed by the criminal syndicates operating in the 235th Precinct, and the neighboring sectors. She has been a victim of a number of ambushes and assassination attempts, yet her (nearly paranoid) vigilance and preparedness kept her alive, yet scarred, and with some bionic replacements needed. 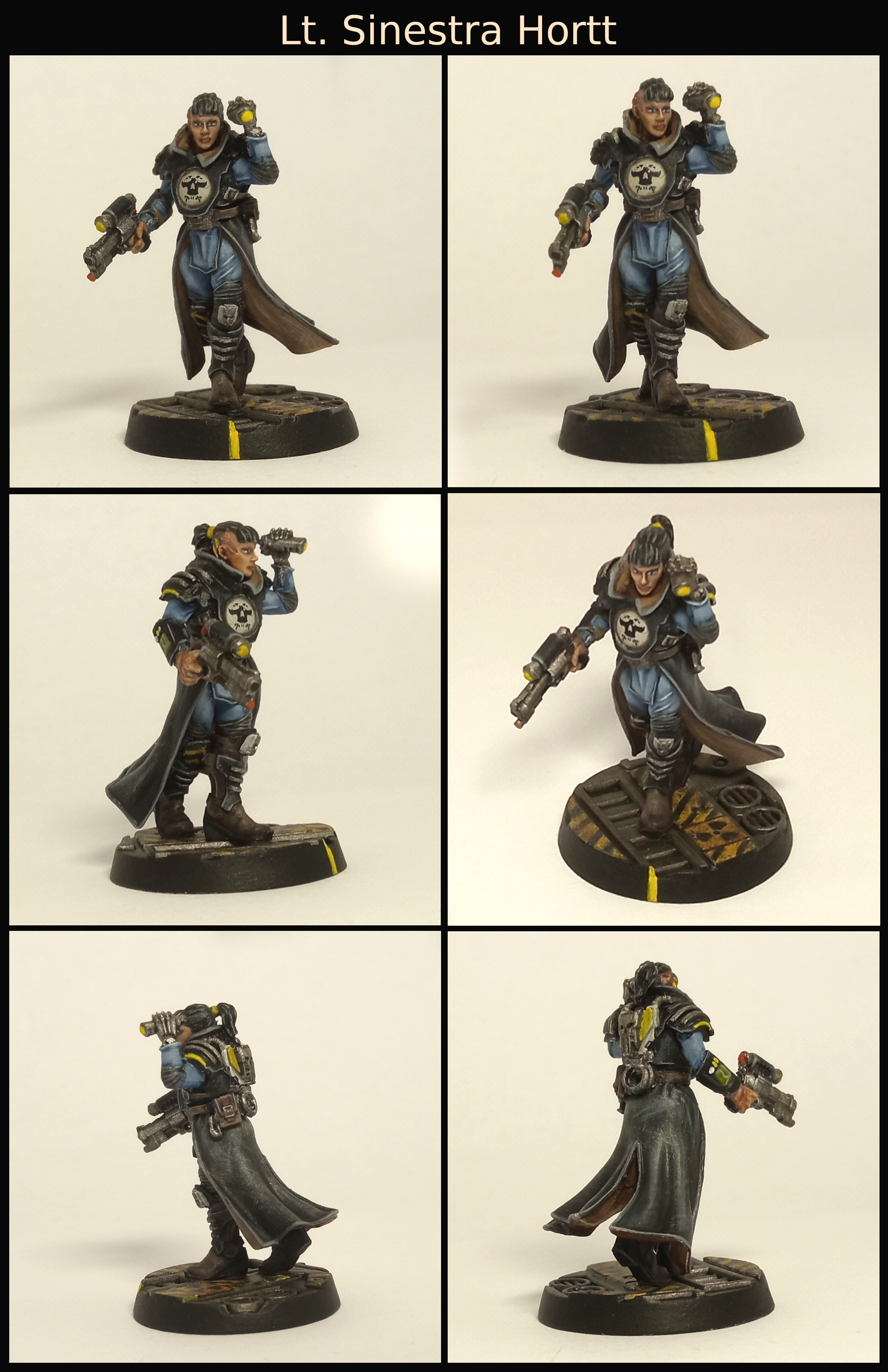 AGPV-012 (Anti-Grav Patrol Vehicle, number 012) is a Falconer Bolt EC, a special version of the Falconer Bolt civilian hovercar. It is not as armored as other vehicles found in the arsenal of the Palanite Enforcers, yet its speed and relative agility are ideal for pursuits, skyway patrolling, and rapid-response. The 235th Precinct operates only a single Bolt EC, as you can't get these anymore, due to trade embargoes caused by ill relationships between the noble houses. 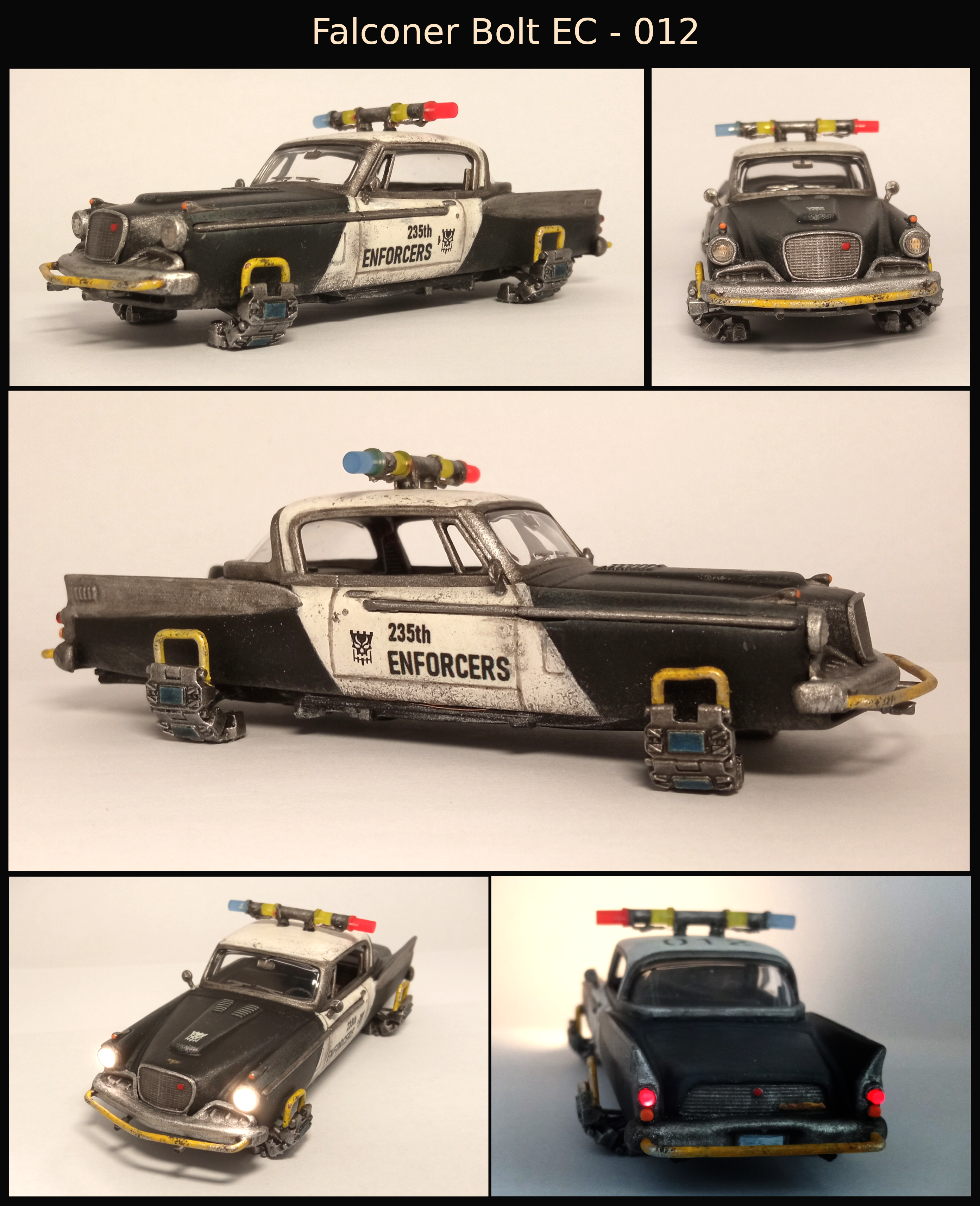 In case you are interested in the schematic, or the program that runs them, drop me a message.
No siren sound effect, sorry, although it should be possible for the microcomputer to play it, there is just not enough space for a reproductor inside. It's stuffed full of wires, batteries, and potentiometers. And it would be annoying after a short while.
Last edited: Feb 28, 2021
Reactions: almic85, Casus, Pagumb and 4 others

Due to a lack of a Lightbox or even some angle lamps, I'm struggling with trying to get a good picture. Should have thought about this earlier.

Troubled Child said:
Due to a lack of a Lightbox or even some angle lamps, I'm struggling with trying to get a good picture. Should have thought about this earlier.
Click to expand...

Plain background, lamp pointed at ceiling to diffuse light, that does the trick for me.
Reactions: MedMos

Troubled Child said:
Due to a lack of a Lightbox or even some angle lamps, I'm struggling with trying to get a good picture. Should have thought about this earlier.
Click to expand...

Try using a regular paper/sorting box with white paper placed over the whole interior, and point a table lamp into it.

Born in a survival bunker and then kicked out when things started getting weird, life has not been kind to Rosie but she has found a true companion in her loyal 'butler' Jenkins. Of course it helps that he took a serious blow to the head before she found him and her gifts make him little more than a puppet these days. It turned out that Jenkins had lost his scrap boat before she had found him face down on the shores of the sump and the Orlocks that had taken it burst into laughter when the small girl had demanded its return. The sight of their leader drowning as sump water leapt up and engulfed him as he stood on the deck was enough to scatter his followers over the railings and as they floundered their way to shore Jenkins got them under way.

If you've lost some valuable cargo to the sump seas and need it back Rosie and Jenkins' Sump Sea Salvage is your best bet, especially as most of the competition mysteriously drowned last week. All reports of Aquamancy are clearly fabrications designed to slander/sell papers/claim insurance. 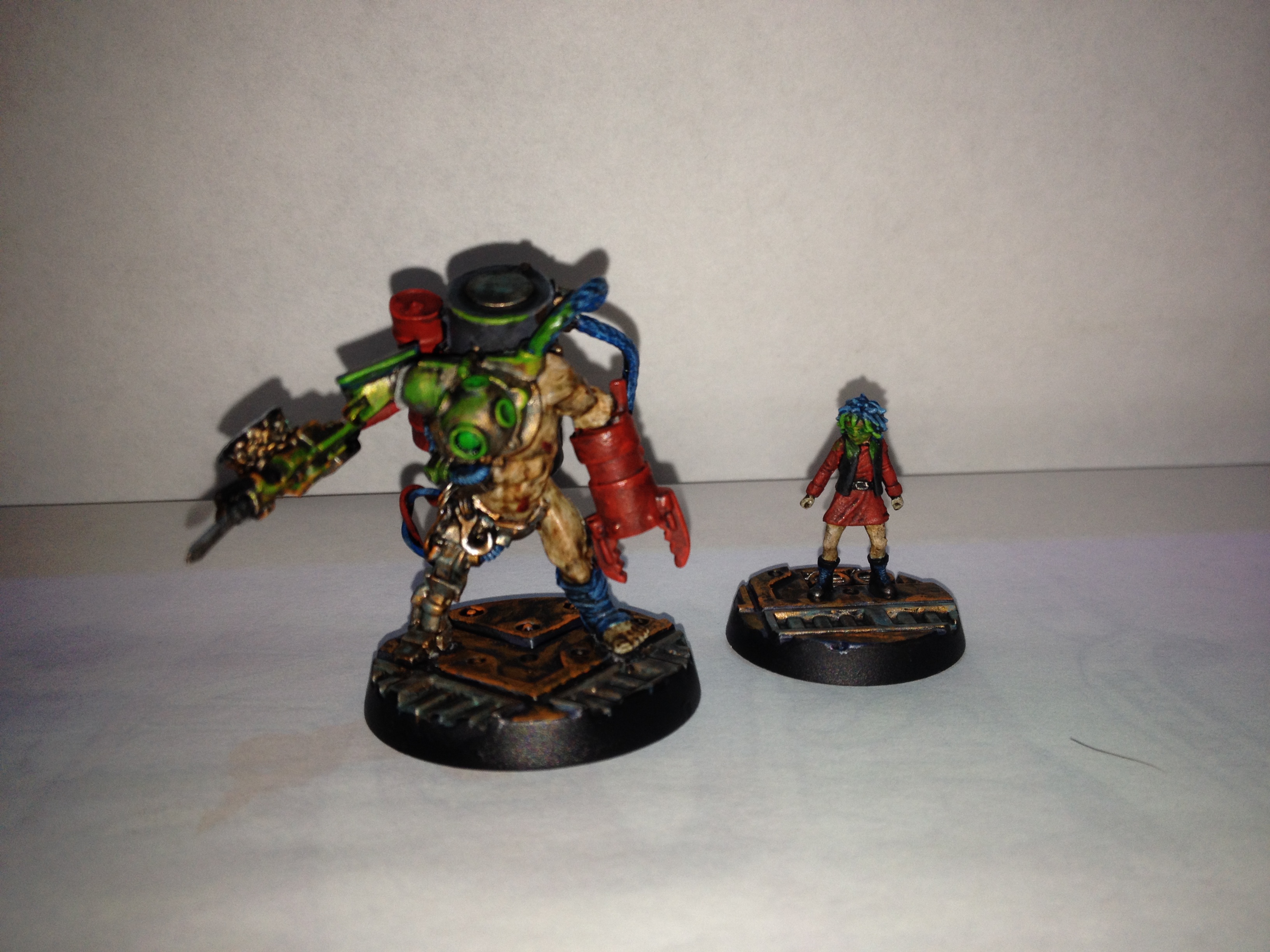 Sadly this was the best photo I could manage. Had to use the flash. I'll try and remember to take a better photo tomorrow and stick it in the WIP thread. Failed to even get the boat built but as that was only worth bonus points I feel less bad about it.

Hawkins44 said:
point a table lamp into it.
Click to expand...

I own no lamps
Reactions: almic85, Casus, Hawkins44 and 4 others
Show hidden low quality content
You must log in or register to reply here.