Punktaku said:
If I can prime him tomorrow…. Then I have to work 12 hour shifts all weekend…. This might be as far as this entry gets. It’s typical for one of my entries.
View media item 65443
Click to expand...

If you prime him, drybrush the whole thing with one or two different browns and then pick out skin and metal bits, I'd say you have an entry!
Reactions: The Tailor and trollmeat
B

On that note, I recently noticed that the comp rules don't seem to require models to be finished. So long as you've met the minimum requirements (3 colours, etc) then you can enter your wip, even if you still intend to do more to it after the deadline.
Last edited: Sep 26, 2021
Reactions: Scavvierising, CaptainDangerous, trollmeat and 2 others

For Necromunda I’m thinking it’s a makeshift lasgun. The nail bead at the end is like a focusing gem or crystal. I’m hoping there’s something similar in Turnip28, or it’ll just be a “counts as” or I won’t have to worry about it because I’ll probably never get a chance to play it.
Reactions: trollmeat, julezwr and MedMos

Here is my Disciple of The Cult of the Sump Mother and entry for the Yakcomp 39: "Secret Society”.

At the very bottom of the Hive City, below the underhive lies the Sump. All scum and waste, be it living or matter eventually filters down to these dark depths of depravity.

The Cult of the Sump Mother was once a cult that worshiped the Hive’s Sump as a living profane god.

What these worshipers didn’t realise was that they were deceived by Chaos and what they thought were the miracles of the Sump Mother were actually the workings of Grandfather Nurgle.

Slowly these worshipers succumb to the taint of Nurgle and they became undying and free from pain as they let pestilence and decay ravage and fill their bodies and minds, all believing that it was the miracle of the Sump Mother.

There lies an area deep within the Sump that has become a a place of worship for the Cult. A garden of pestilence and decay that reflects that of their true god and master, the Lord of Pestilence. Fungi and Algae grown from rotten flesh and rivers of rot and muck fill the landscape with such vibrant yet deadly colour.

Here is a Disciple of the Cult of the Sump Mother trudging through the rotting swamps of this pestilent garden. Lichen and dodder growing out of his rotting flesh. Lifeless eyes glowing with disease. An old, corroded chain glaive held tightly in his decaying fingers. An old gas mask once worn to protect him from noxious gasses now fused to his very skin. And as a last gift from Nurgle, septic antlers grow from his back like a set of skeletal wings. 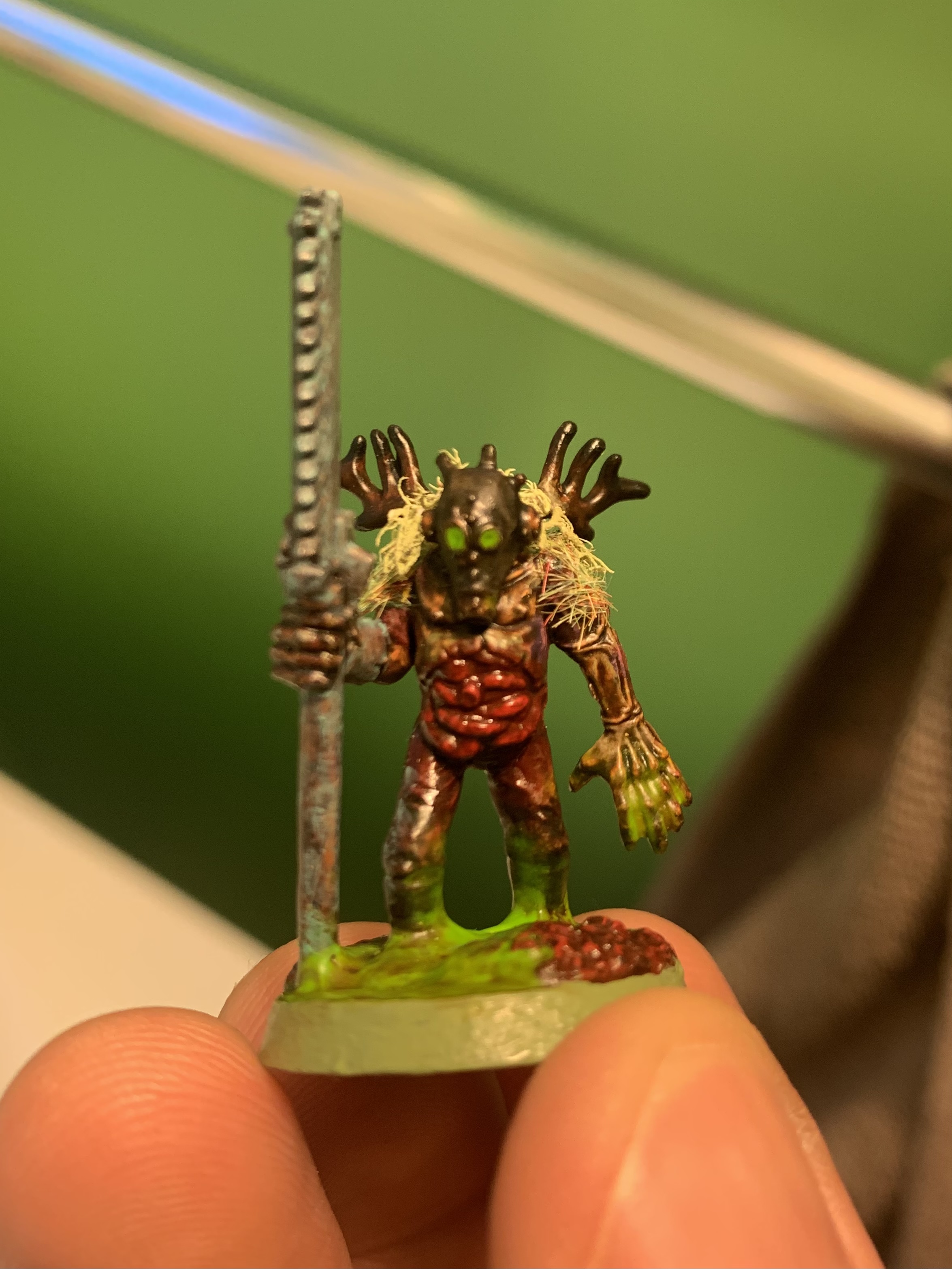 Disciple for The Cult of the Sump Mother and entry for the Yakcomp 39: “secret society”
Reactions: Grognard Gluefingers, Casus, The Tailor and 6 others

CaptainDangerous said:
The deadline for this comp will be midnight BST on Sunday the 26th of September 2021.
Click to expand...

I got some varnish on mine this morning, so am intending to take some photos shortly.
Reactions: trollmeat, Scavvierising and MedMos

Curses. Haven't managed anything since my last WIP. Might try to finish the build on time'ish, for your being pleasure. But no chance of any painting. So I'm out.
Reactions: MedMos, Casus and trollmeat
B

Here's my Cawdor leader, inspired of course by the classic Redemptionist.

View media item 65613
Reactions: Grognard Gluefingers, Casus, The Tailor and 4 others
B

And here's my Cawdor heavy with flamer.

View media item 65614
I have made and painted some more Cawdor during this comp period, but I'll leave it at 'only' the two entries this time. I might have included another if I'd had time to get the Ratskins painted, but I didn't.
Reactions: Casus, The Tailor, trollmeat and 3 others

Iv got a 10 hour night shift, followed by a 10 hour sleep shift. Chuck in the commute, cuppas, and when I’m let out into the yard, that’s at least 24 hours!

Gottverdammt, I'll miss the deadline again NOPE! I thought it is until the end of the month. 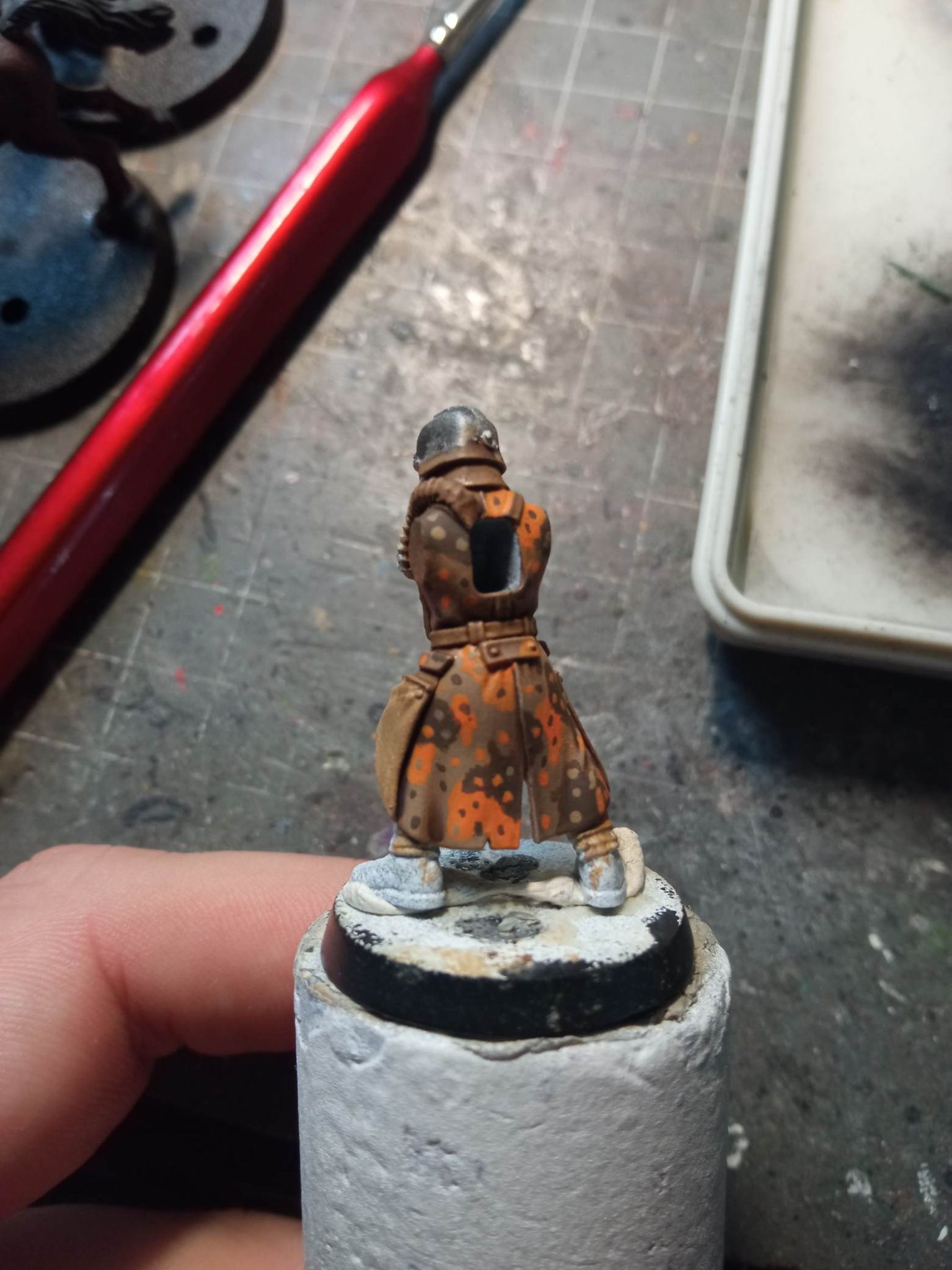 Hawkins44 said:
Gottverdammt, I'll miss the deadline again. I thought it is until the end of the month.

Not liked because of missed deadline, but that mini looks promising as h#ll!
Reactions: Casus, trollmeat, The Tailor and 2 others

hopefully its not too late and I'm only entering a a piece of terrain but I saw the contest and it stroked my imagination last night. I've been trying to make some bulkheads for each of the main gangs and thought a genestealer one would be cool so made this print yesterday and painted it today so its a bit ugly also I'm really a bad painter. the cultist is unfortunately a old one so he doesn't count. 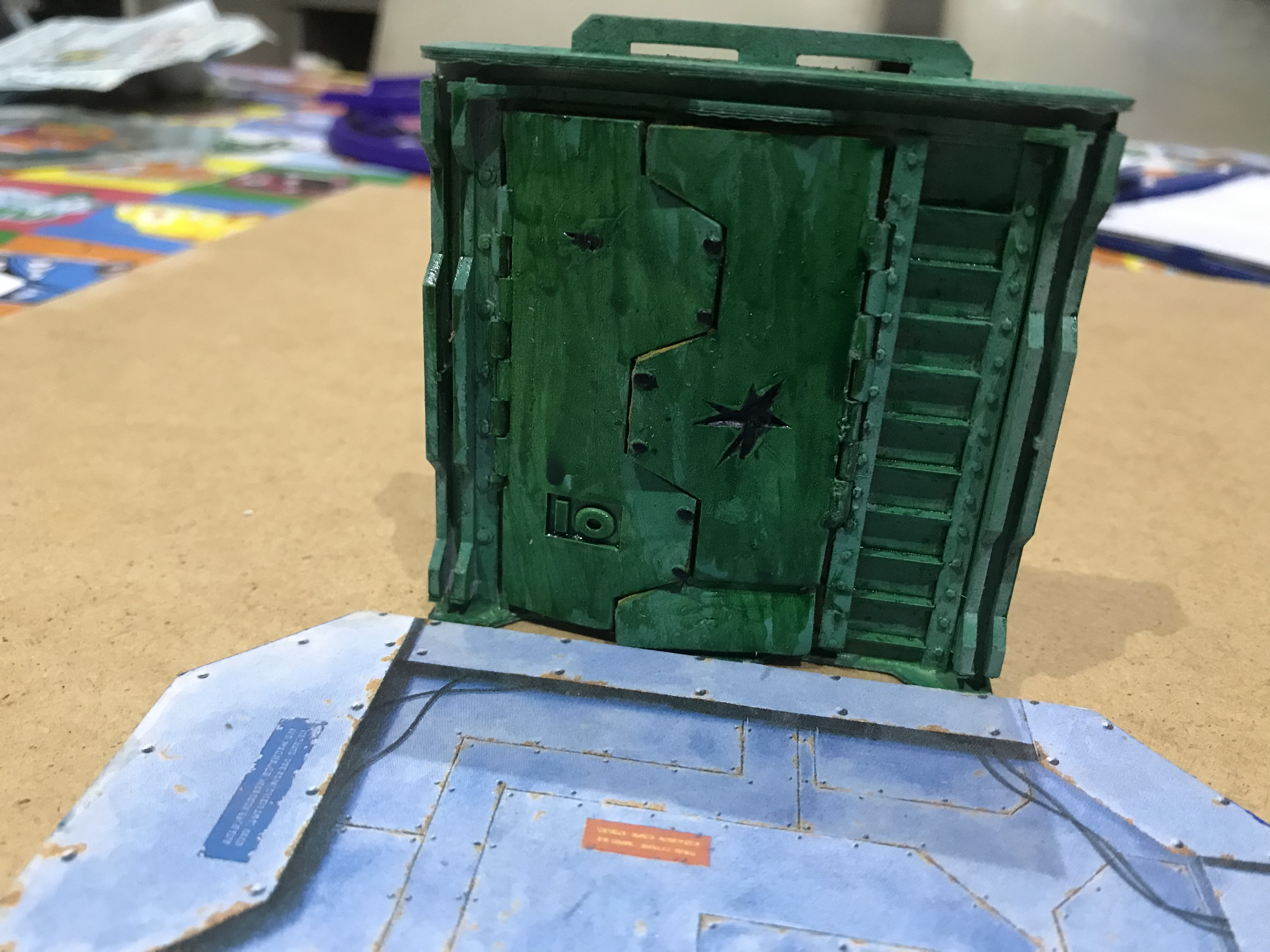 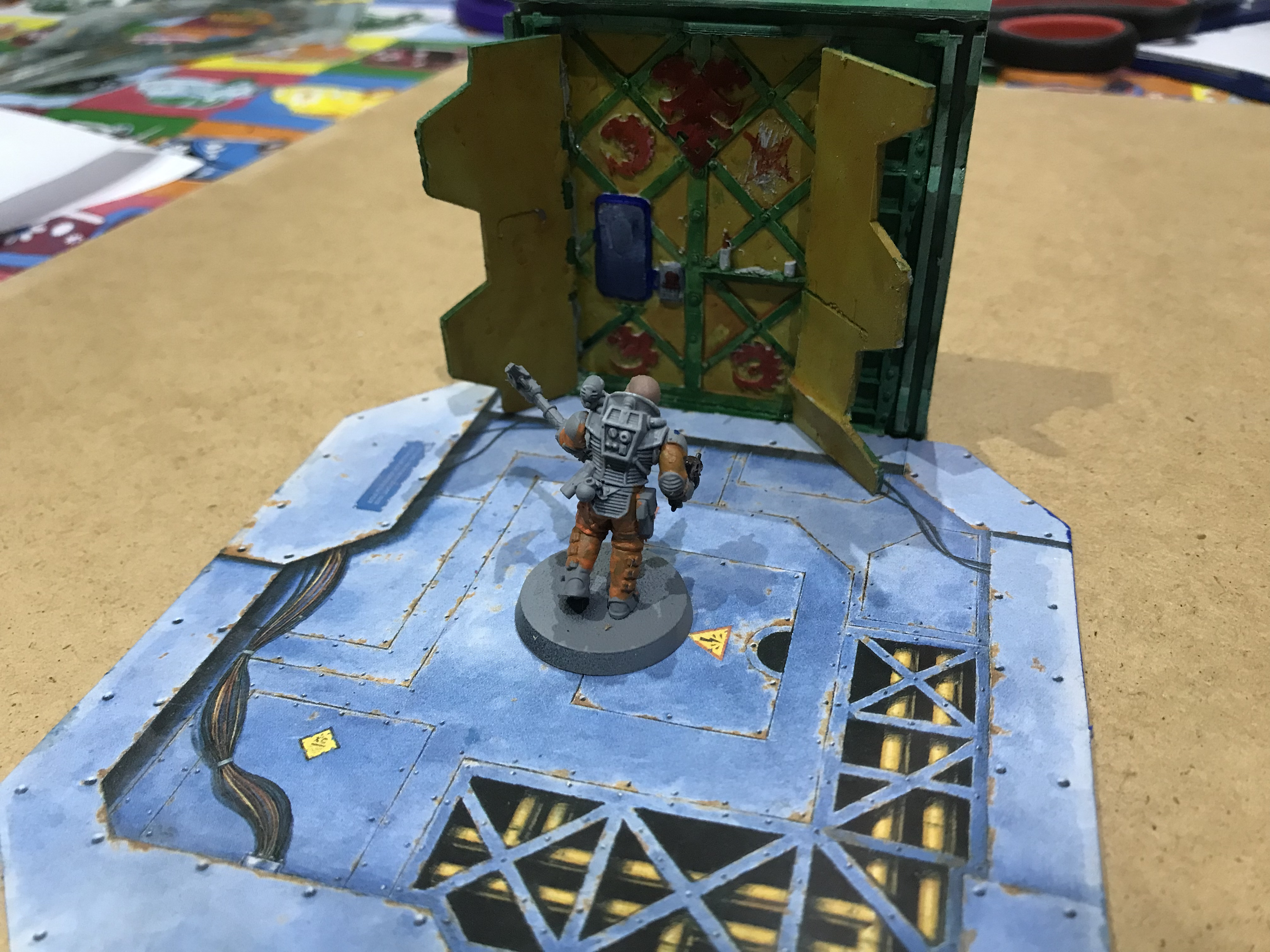 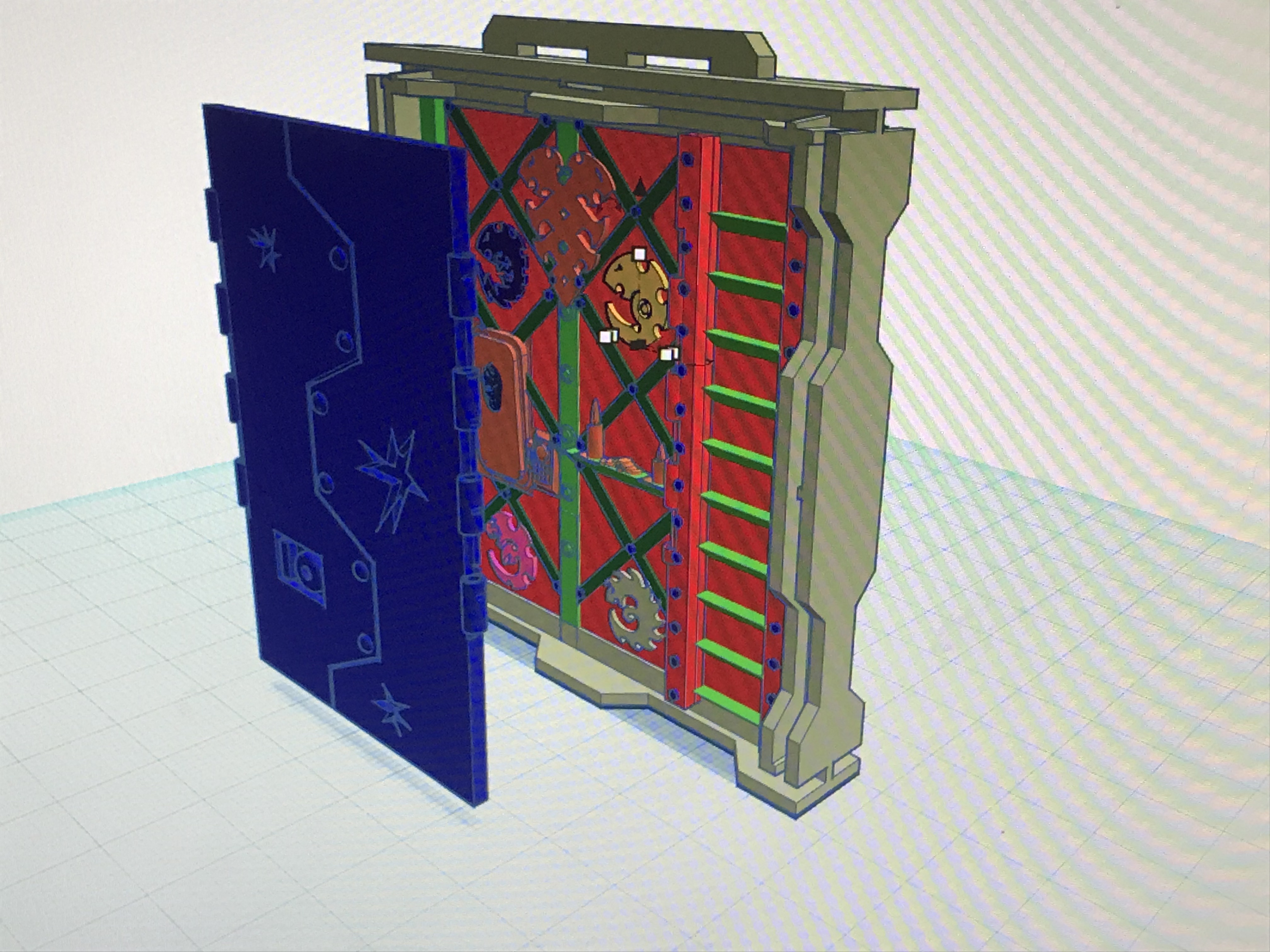 unfortunately there was a issue printing the top right icon so that failed but i figure it could just be that particular branch of the cult was wiped out.

I've set it too public access if anyone wants a look at and possible print and make a better one https://www.thingiverse.com/thing:4975301

Long time watcher but only a limited poster, I am making this thread so I have somewhere to record my terrain and to hopefully encourage myself to make some more as my work ethic seems to be inversely tied to how soon I need anything to be ready. With Mankyfest coming up in 2 months I figured...

actually found a nice genestealer body and heads from https://www.thingiverse.com/thing:4869498/files so will try and print and paint one before the end of today 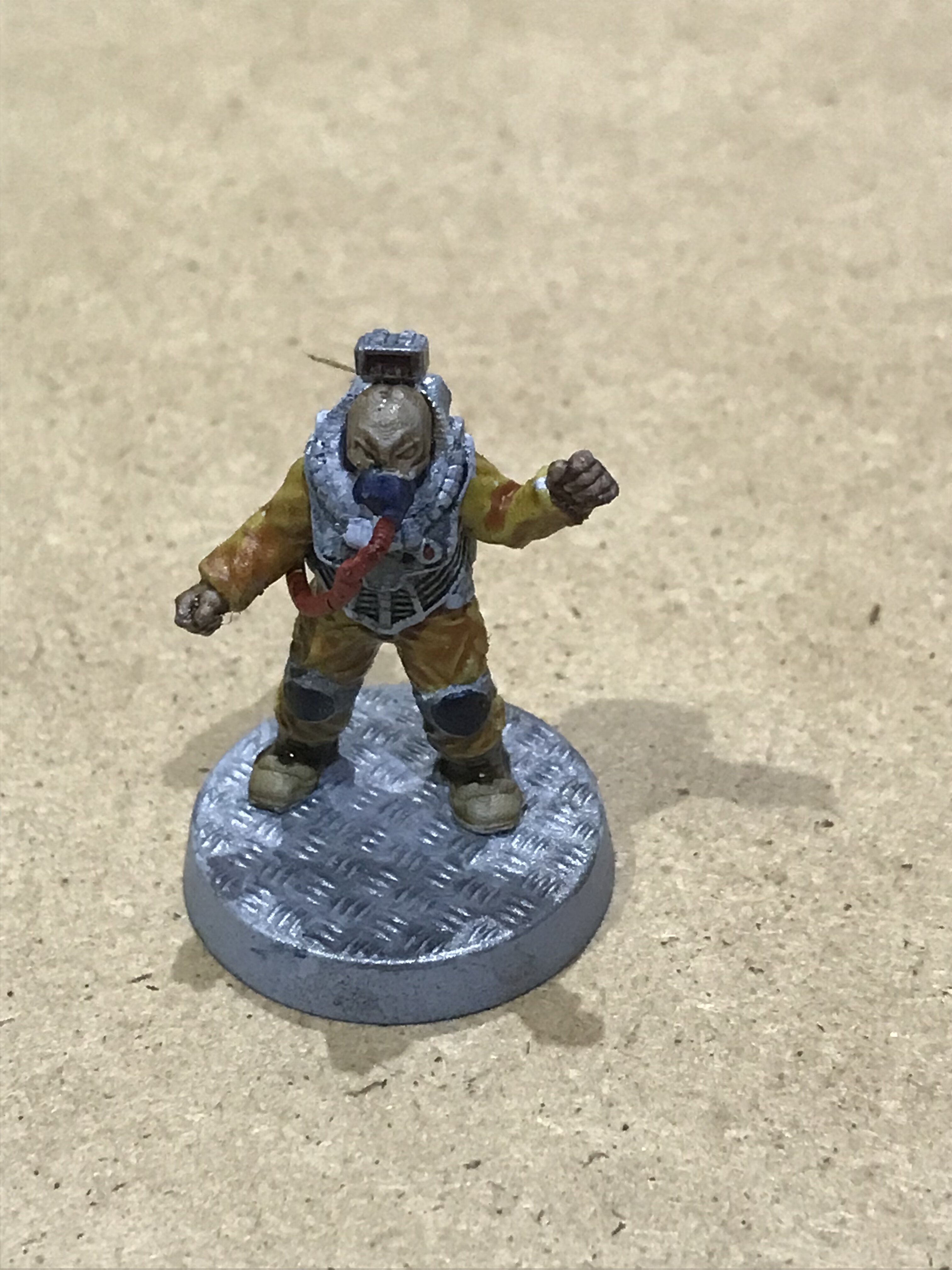 SO.... a bit of a scramble to make the midnight BST Deadline, but here it is:

I wanted to do something fun to model, AND useful on the tabletop, and since I've never quite got around to finishing my actual Escher models this seemed like a good choice:

A "counts as" Escher gang - the load-out of the models is loosely based on one of the Goonhammer Escher starter lists (since I have no idea what I'm doing with Escher), with the Ravens proxying Phelynxes (Phelynxii?) + a few extra bits and bobs (and bodies) because they looked neat... Lots of Toxin weapons and a few Escher mainstays like Lasguns & a plasmagun leader to give some punch! 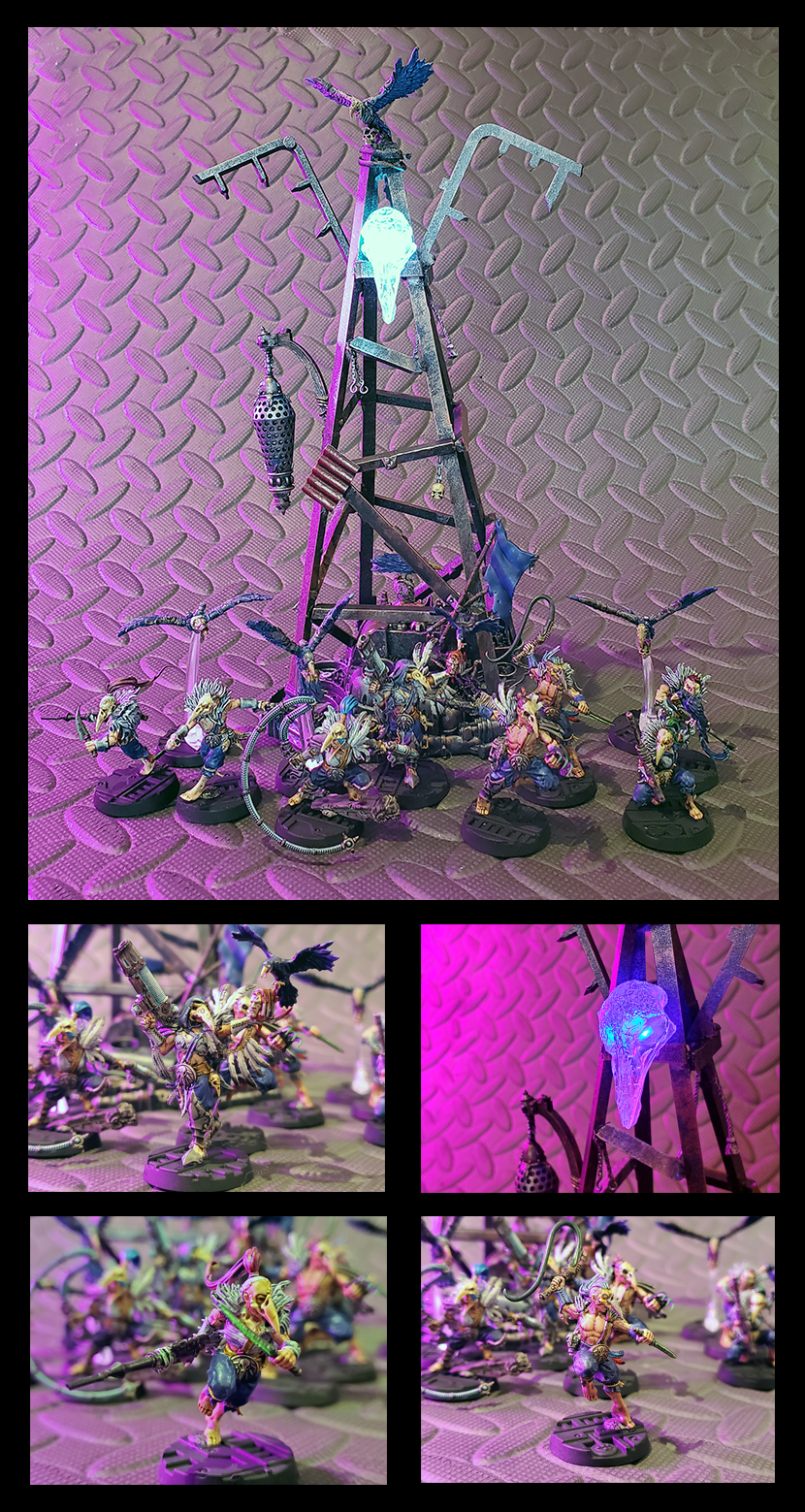 Close up on the Ghostraven Skull: 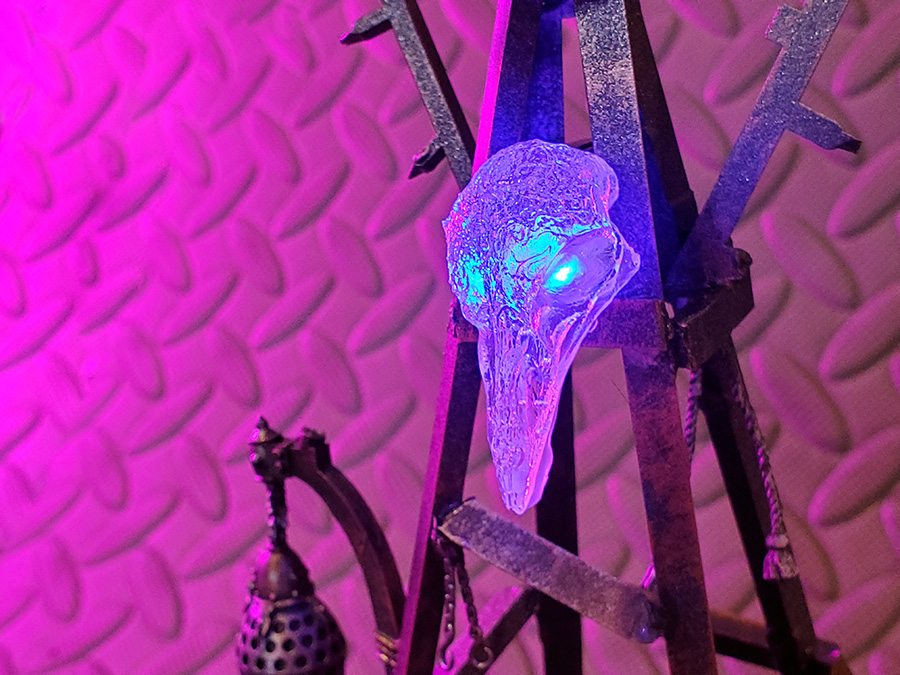 So I cast this in resin using a crow skull silicon mold, then drilled a hole in the back to seat... 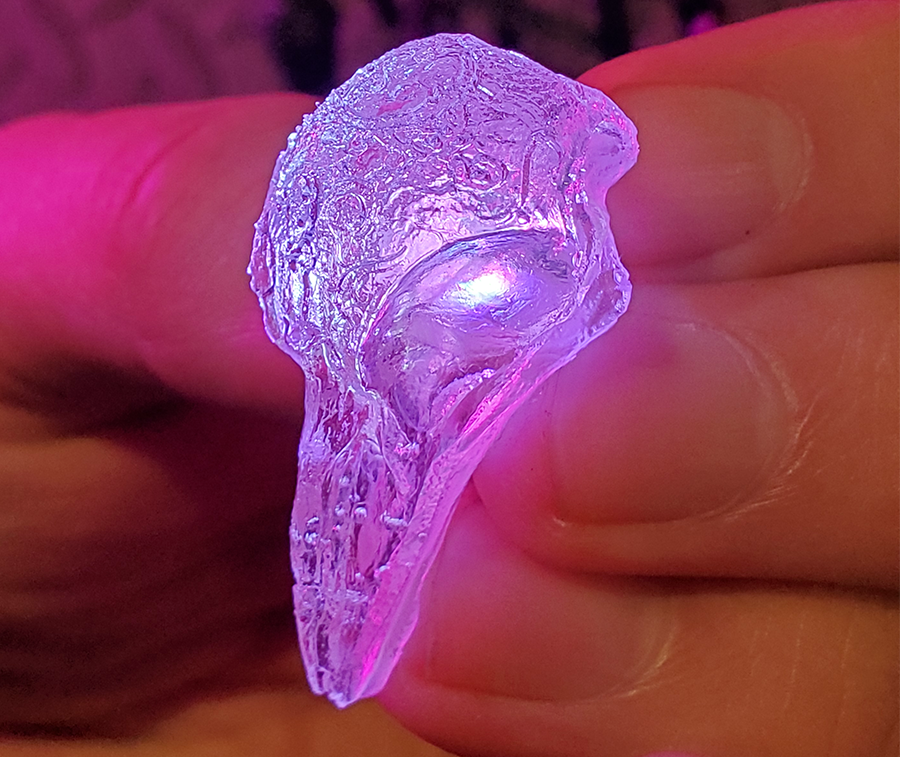 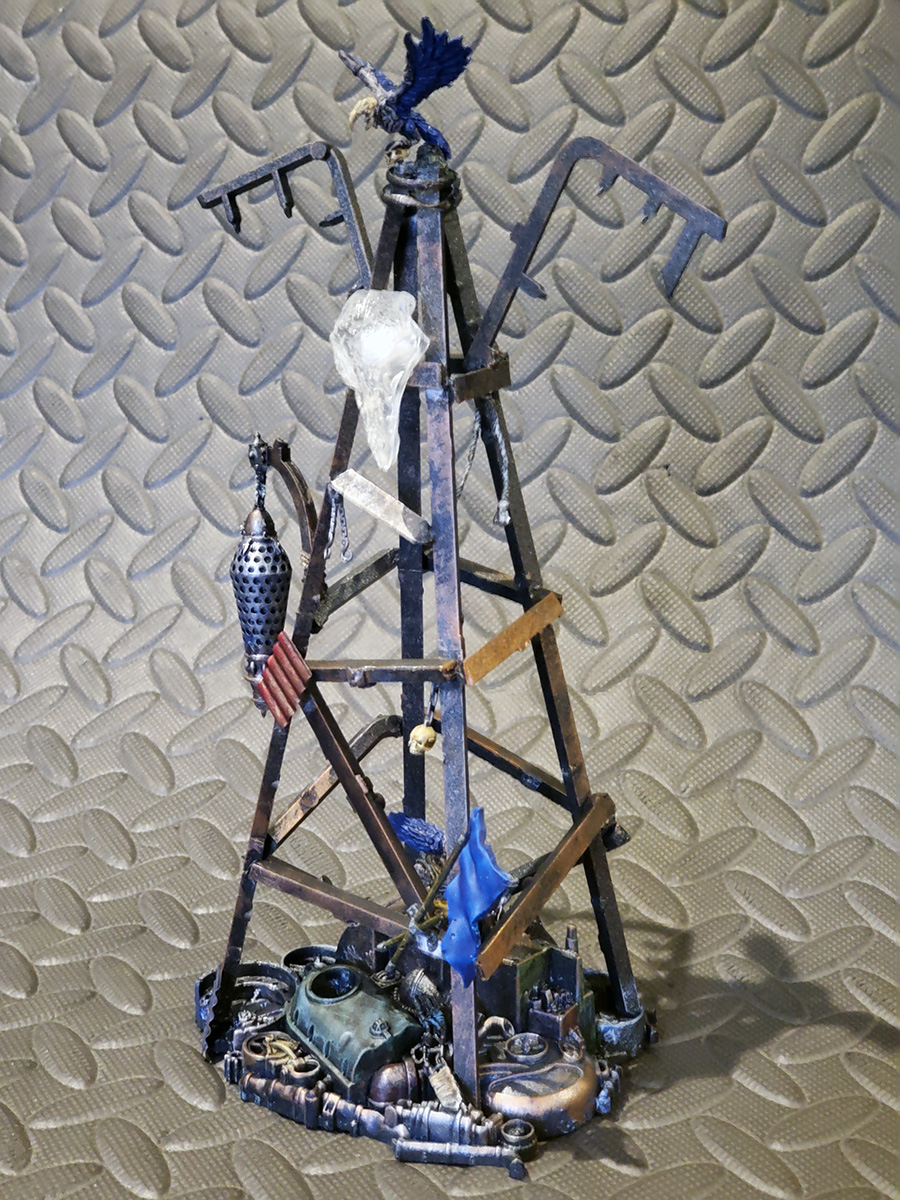 and a quick video of the final effect, although the video has a bit of that annoying "LED flicker" that you don't see IRL:


I've got some detail work still to do, but I'm out of oomph today after the final push to get some paint on the totem and the LED wired up. Still, can't wait to try these out in a match
Last edited: Sep 26, 2021
Reactions: Grognard Gluefingers, Pierric, trollmeat and 6 others

Soo... It is almost midnight, and I pushed myself to finish this guy as best as I could before I have to head to bed, so I'm not a complete zombie tomorrow morning.

Since I started painting at about 14:00, and found out the competition ends today a little later, I could say painting journey of this guardsman was a... Blitzkrieg. 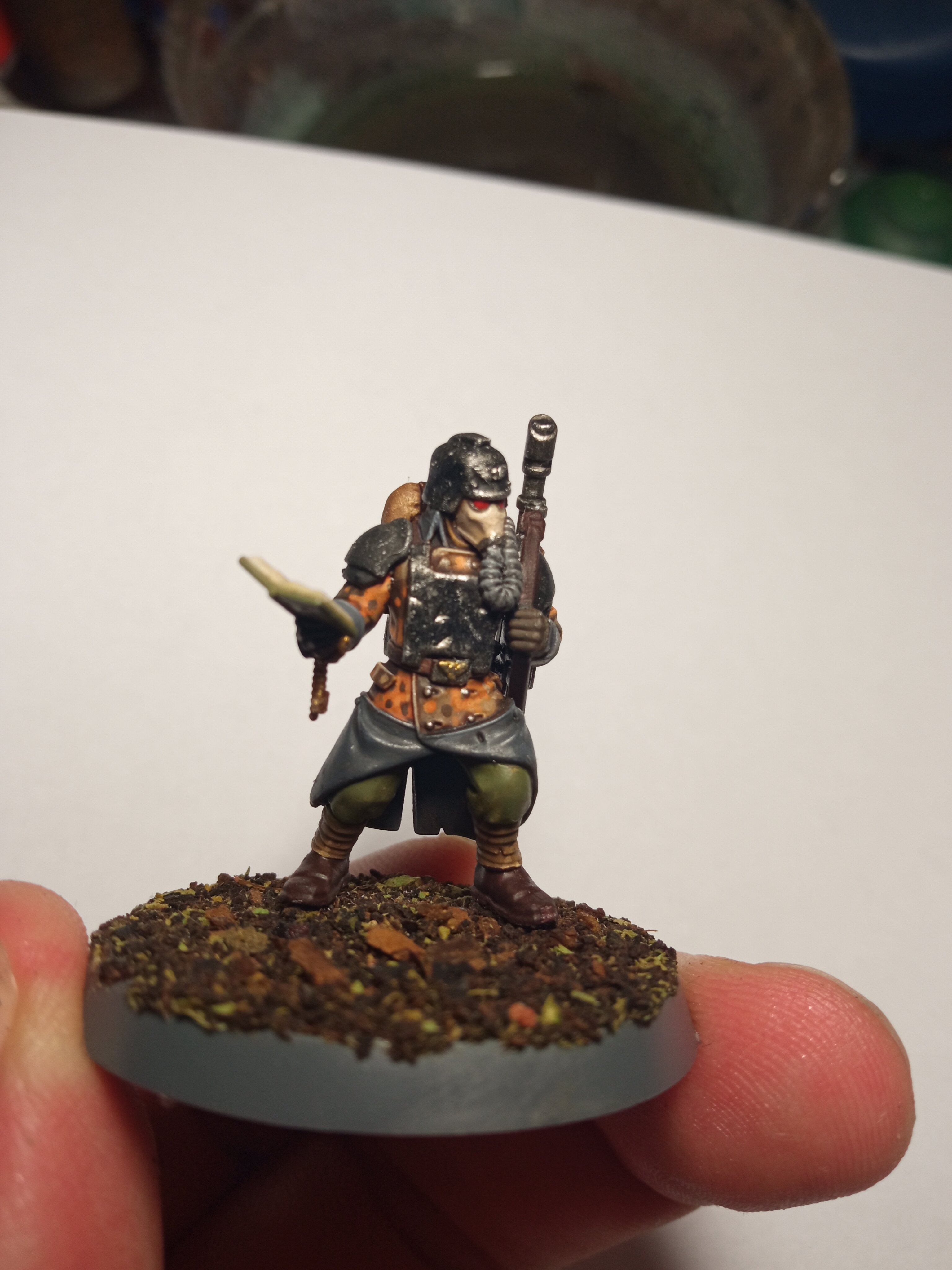 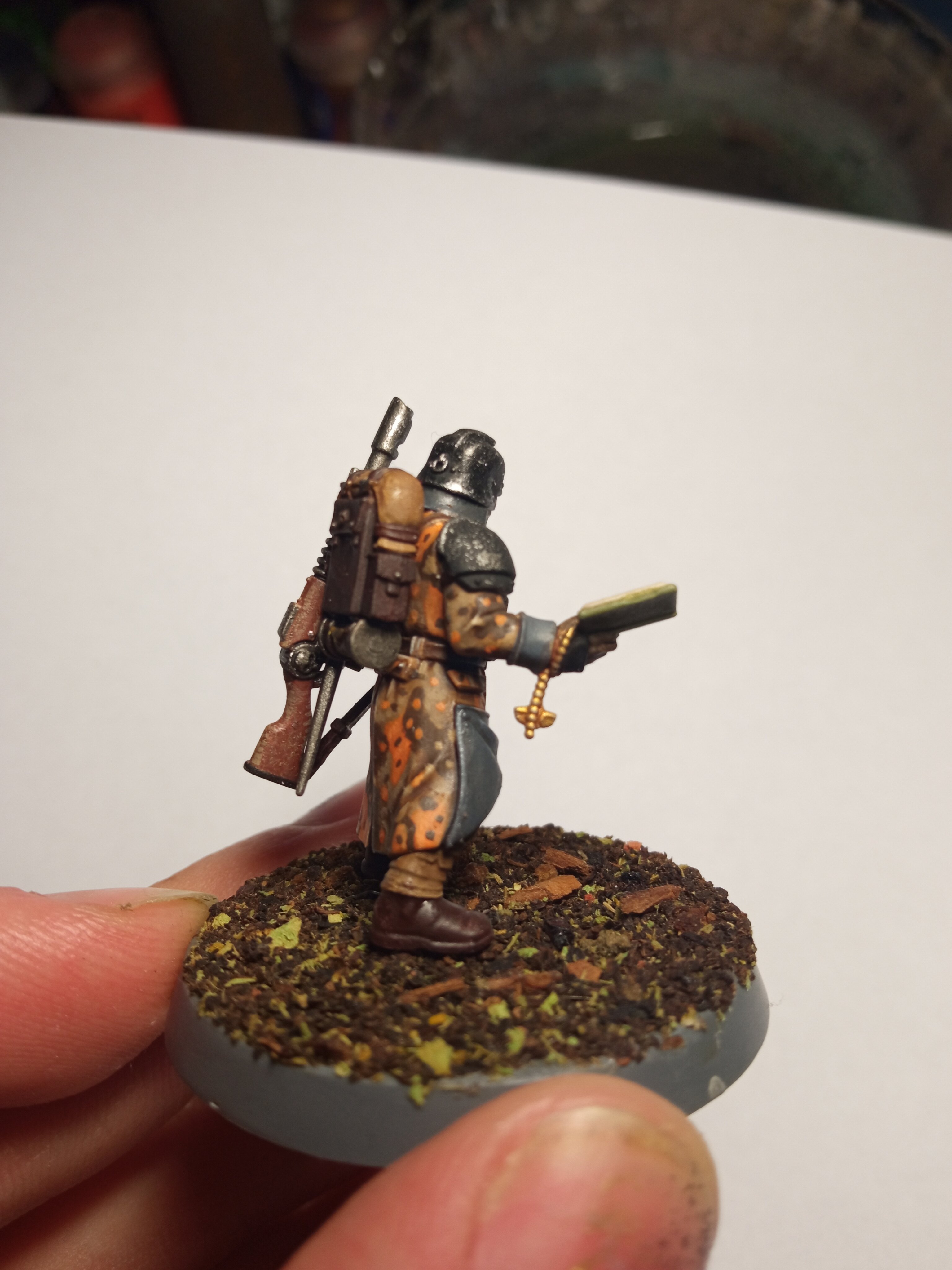 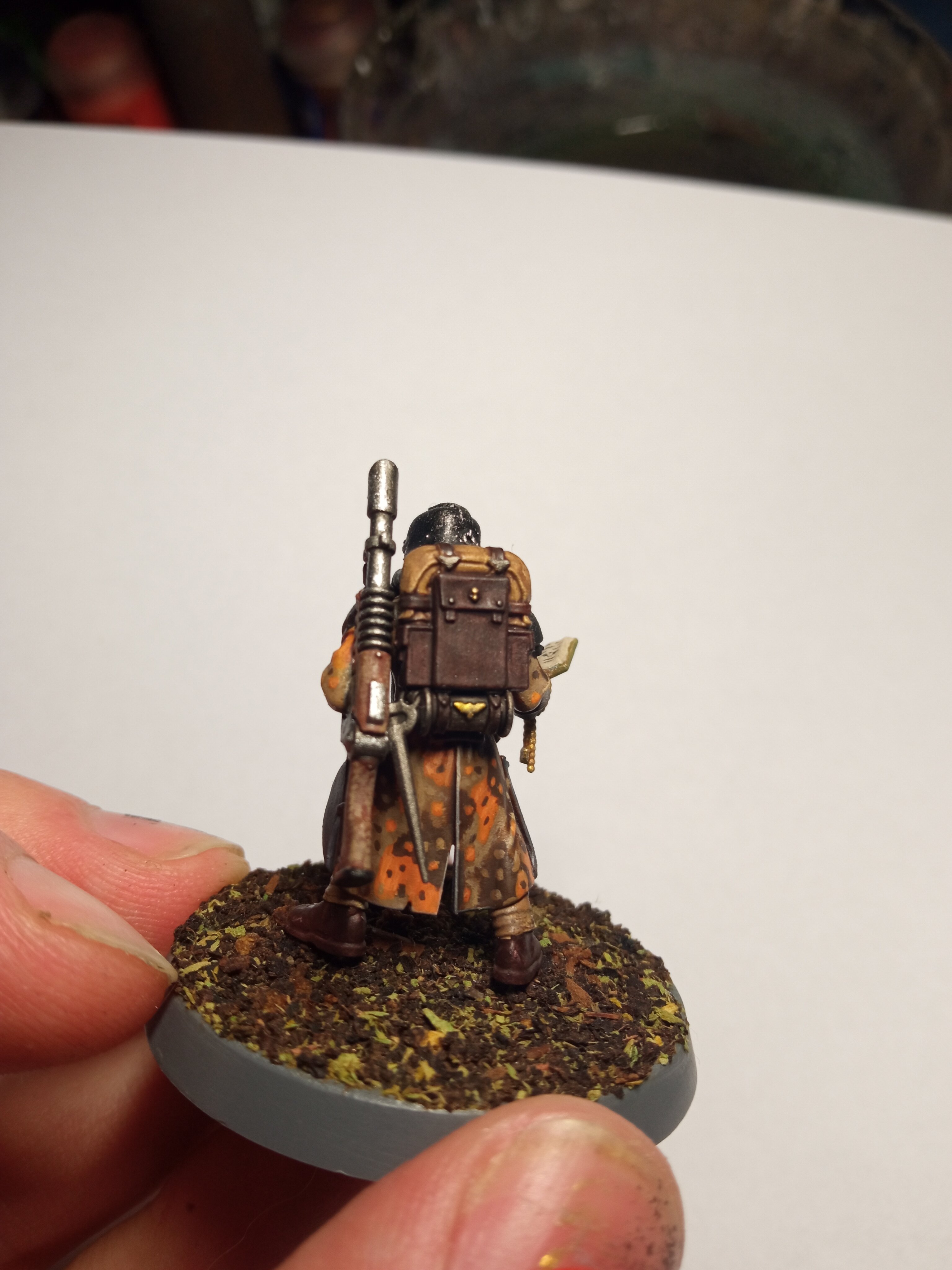 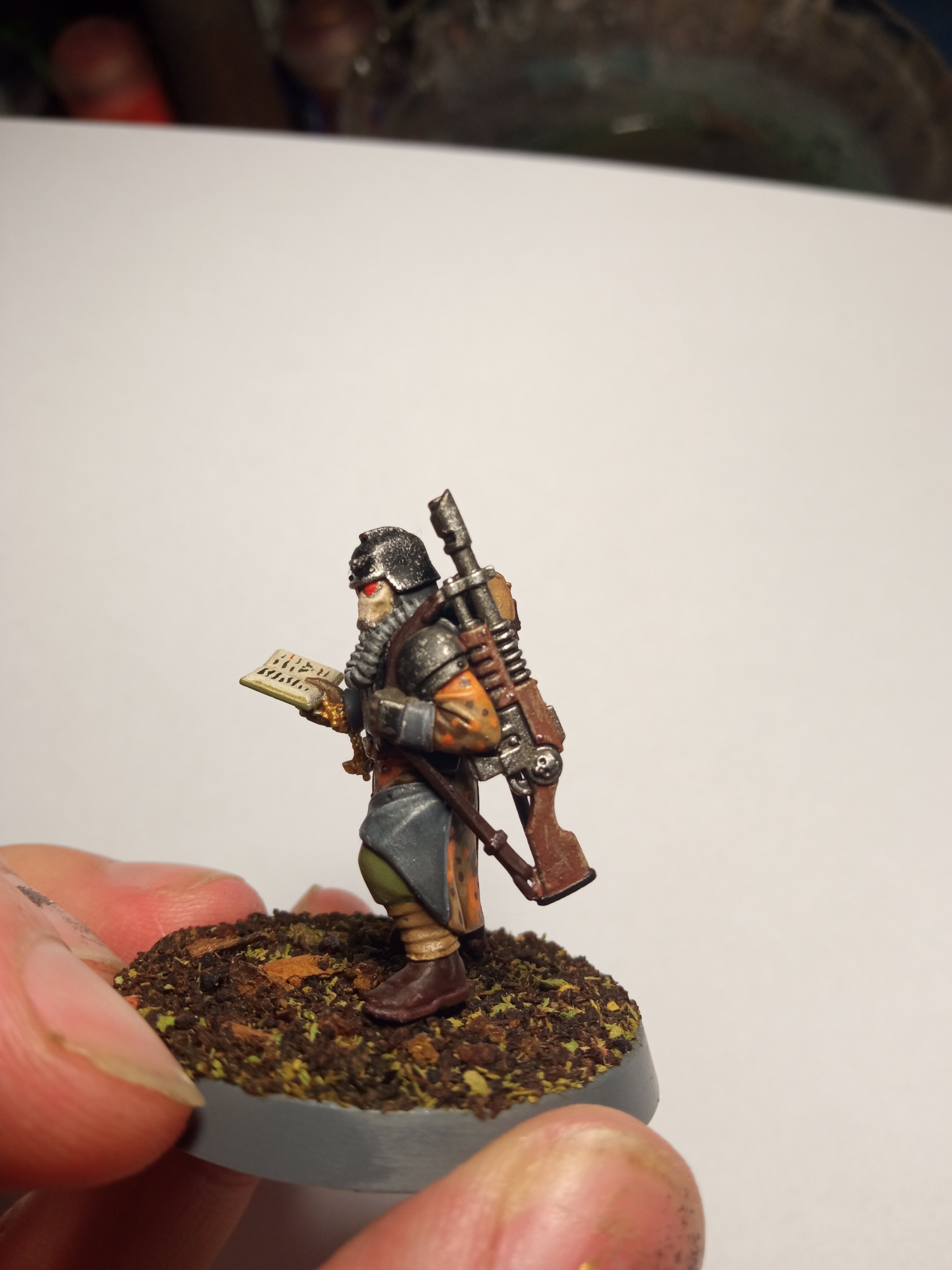 Hawkins44 said:
Soo... It is almost midnight, and I pushed myself to finish this guy as best as I could before I have to head to bed, so I'm not a complete zombie tomorrow morning.

Since I started painting at about 14:00, and found out the competition ends today a little later, I could say painting journey of this guardsman was a... Blitzkrieg.

Great work! That camouflage is amazing!
Reactions: trollmeat, Casus, Hawkins44 and 1 other person

A chance meeting in the ruins
"No no, please come closer! Stay a while. Let me tell you about Yr-Hwn Sydd'Yn-Llygru!" 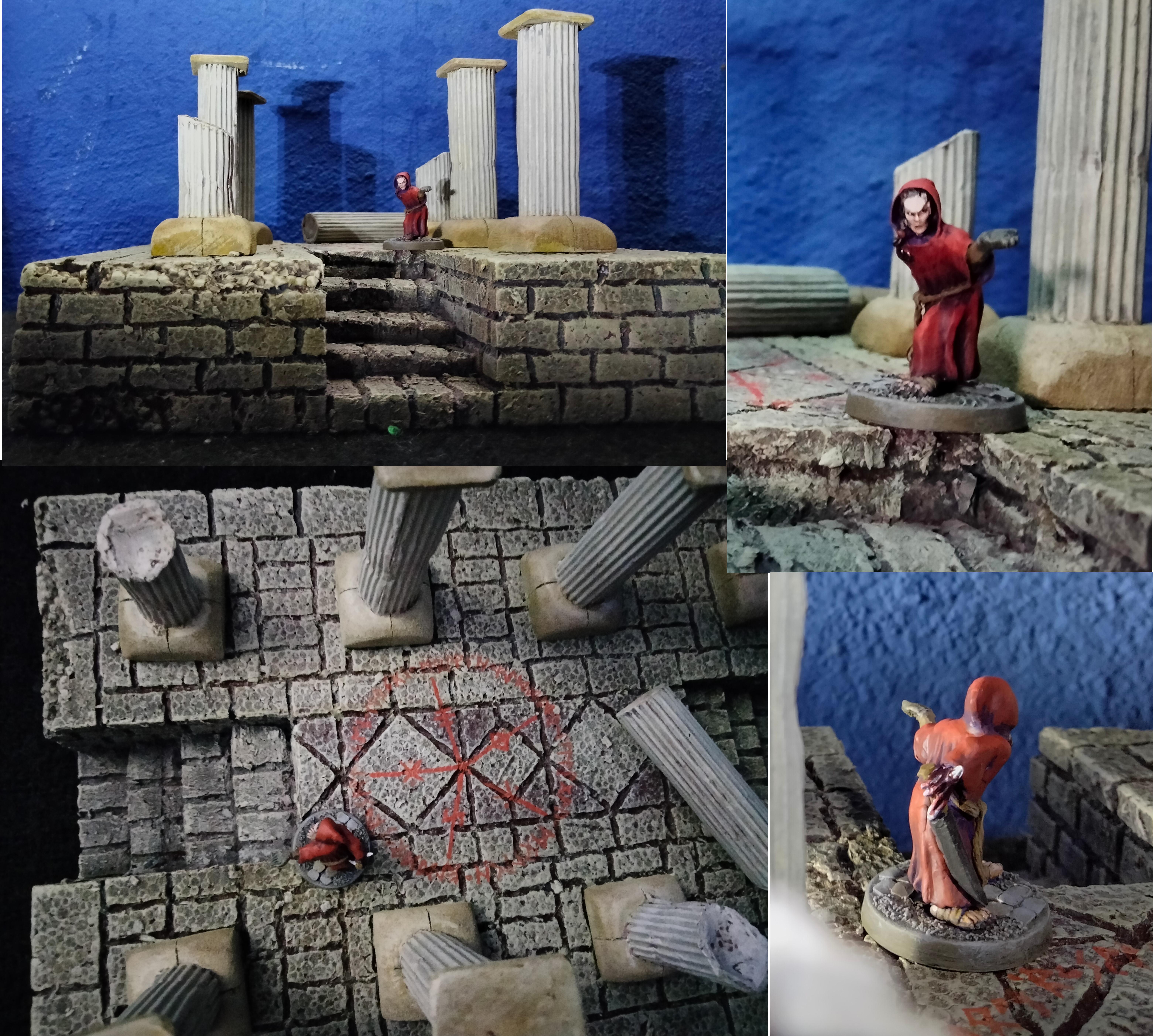 Since electronics keep me from dying of hunger or becoming homeless, I have a professional interest.

The LED circuitry is built, or bought as a whole? It does not seem to suffer from the superbright LED syndrome most models do suffer, when LEDs are present, which is something I'm happy to see!
Good work!
Reactions: trollmeat

Hawkins44 said:
The LED circuitry is built, or bought as a whole? It does not seem to suffer from the superbright LED syndrome most models do suffer
Click to expand...

I'd love to take some credit here, but I'm more on the "duct tape or wd40" level of handy - I pilfered the LED with colourshift (built right into the bulb) from a dollar-store electronic tea light, powered by a watch battery.

The all in one nature + small power source (plus like you pointed out: not too bright luminance) is great for scenery!
Reactions: Hawkins44 and trollmeat
Show hidden low quality content
You must log in or register to reply here.