I know who it is! It’s Mary Poppins!

Putting on the paint. Really would’ve preferred a black primer, but oh well. 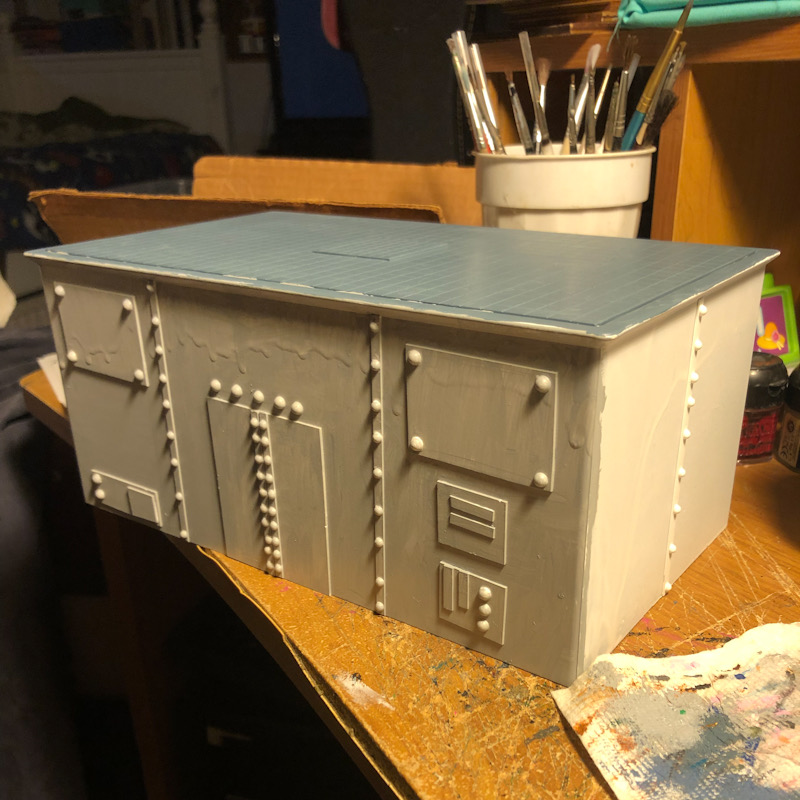 Yakmarine Punktaku posing with the WIP for scale. I feel like it needs “more”…. 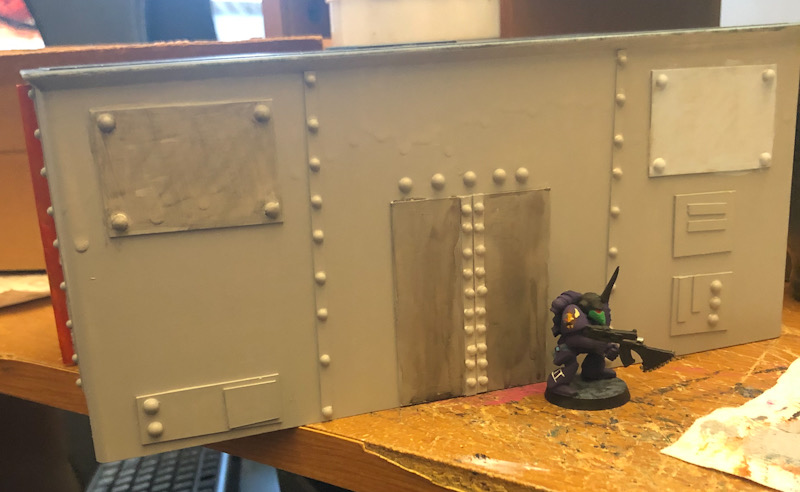 Grimed up, with some rust, posters, grafiti and such to fill the large areas a bit I reckon that'll look ace
Reactions: Mr. M, trollmeat, Stoof and 1 other person

spafe said:
Grimed up, with some rust, posters, grafiti and such to fill the large areas a bit I reckon that'll look ace
Click to expand...

That’s what’s got me…. I don’t usually grime up stuff. I don’t have a color printer for posters. And I need to disguise that primer drip somehow….
Reactions: Mr. M and trollmeat

I wouldn't disguise but exxagerate the primer drip.
Slop some more on the roof and paint it gooey green or purple or brackish black. Sump it up.
Reactions: trollmeat

Yeah, i definitely want to “disguise” it as something else. Like I meant to do it.

(Oh shoot…. I think that ship has sailed as I’m asking advice on what to do with it…)
Reactions: trollmeat and spafe

My entry is finished! 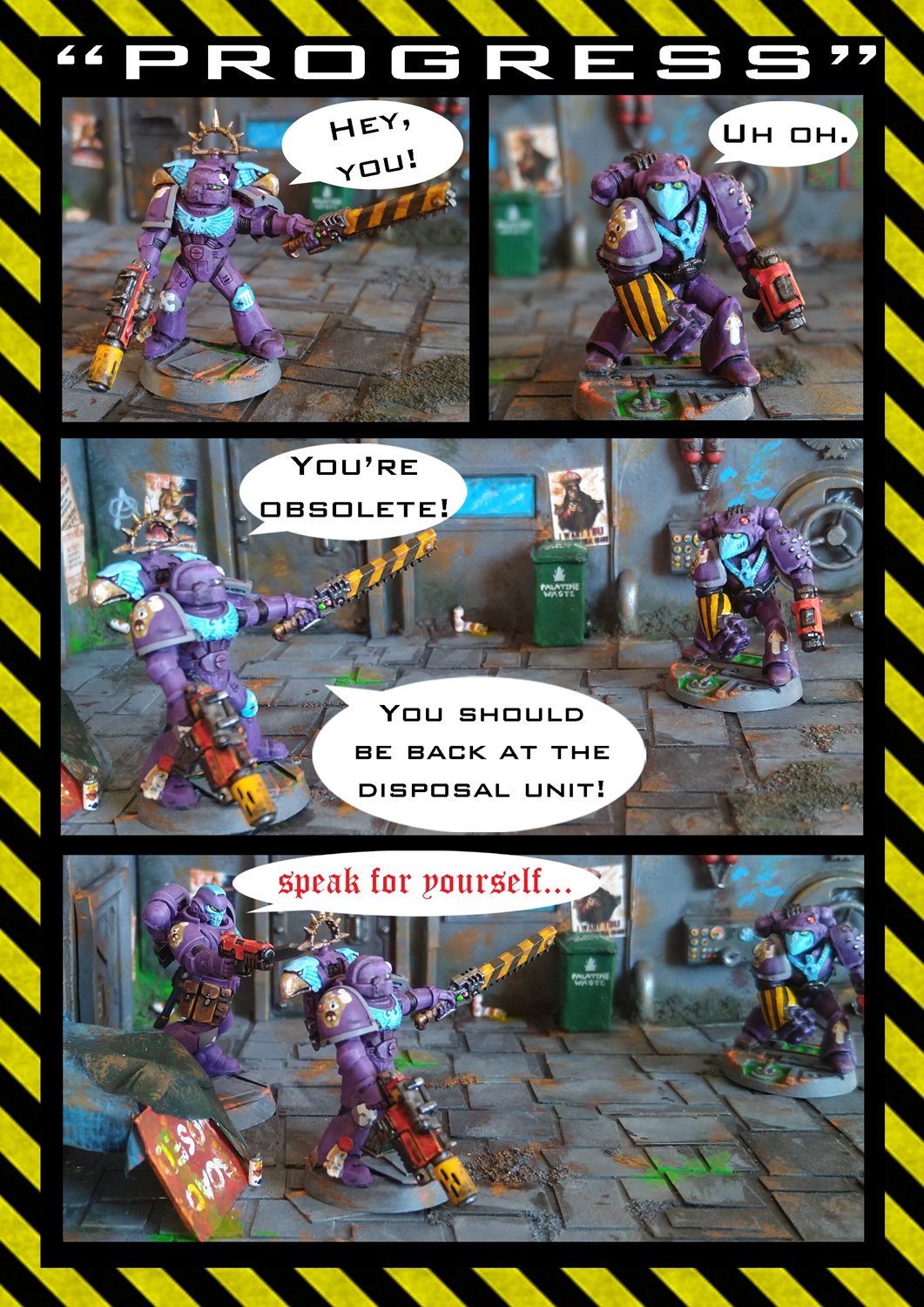 Yakmarines through the ages - Comp 40 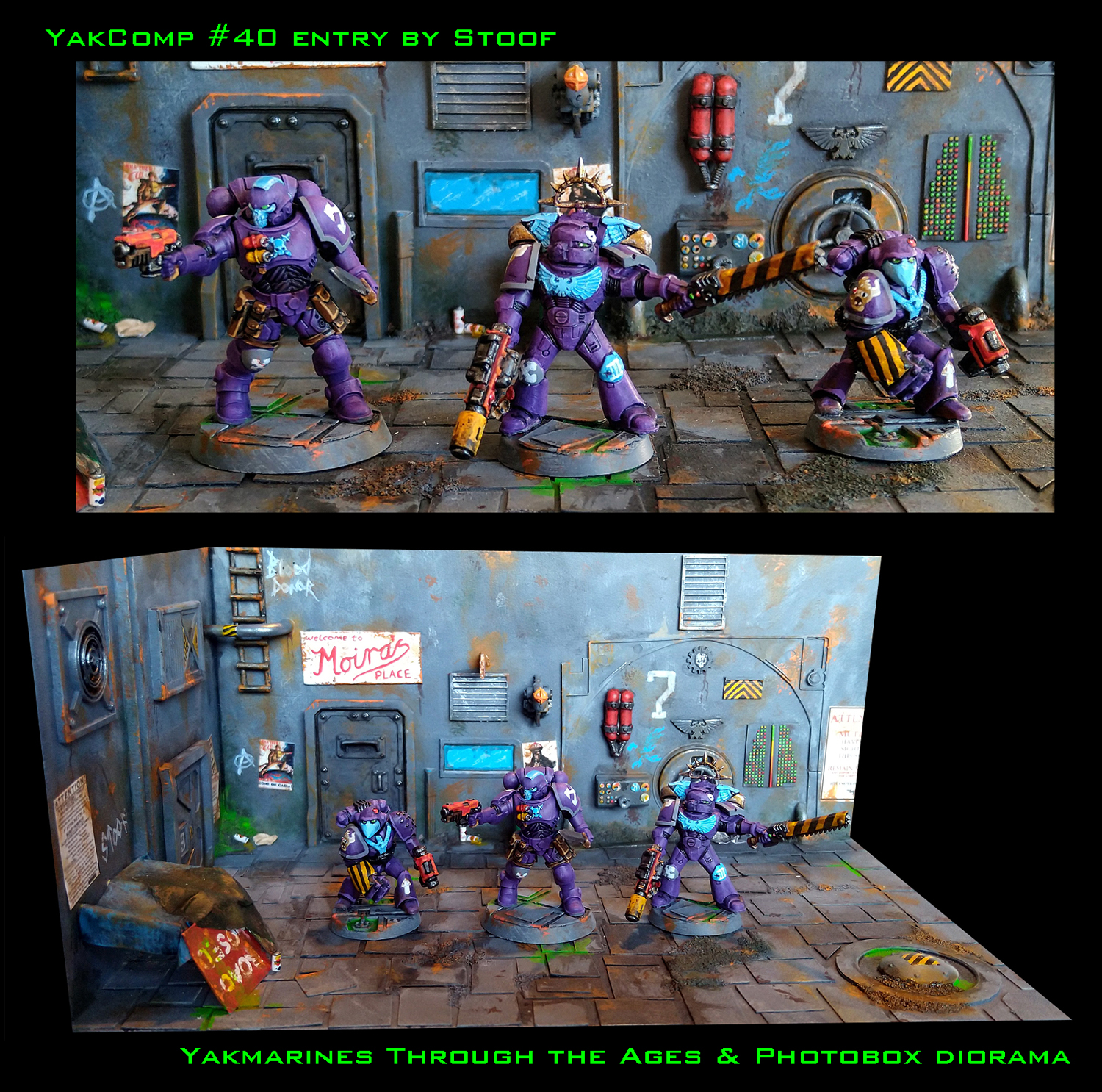 May I share that Comic outside oft the Yak?
Reactions: trollmeat, Resmire and Stoof

I dunno if this is working the way it should…. I usually don’t “grime” things. 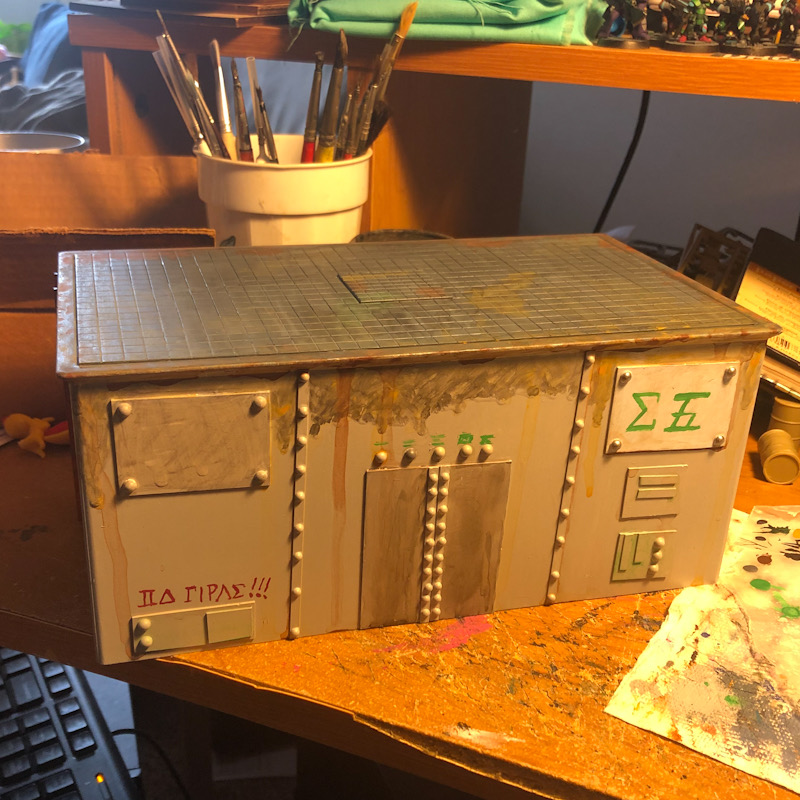 Punktaku said:
I dunno if this is working the way it should…. I usually don’t “grime” things.
View attachment 144134
Click to expand...

Owing to some very drowsy/sleep inducing meds I've been put on, I've not managed to get much done.

So far we have 3 partying undead members. A sort of undead welcome party as opposed to the full dance macabre scene I envisioned.

Will concentrate on painting these before trying to move onto the other parts of it. So I should be able to get something to enter done on time. 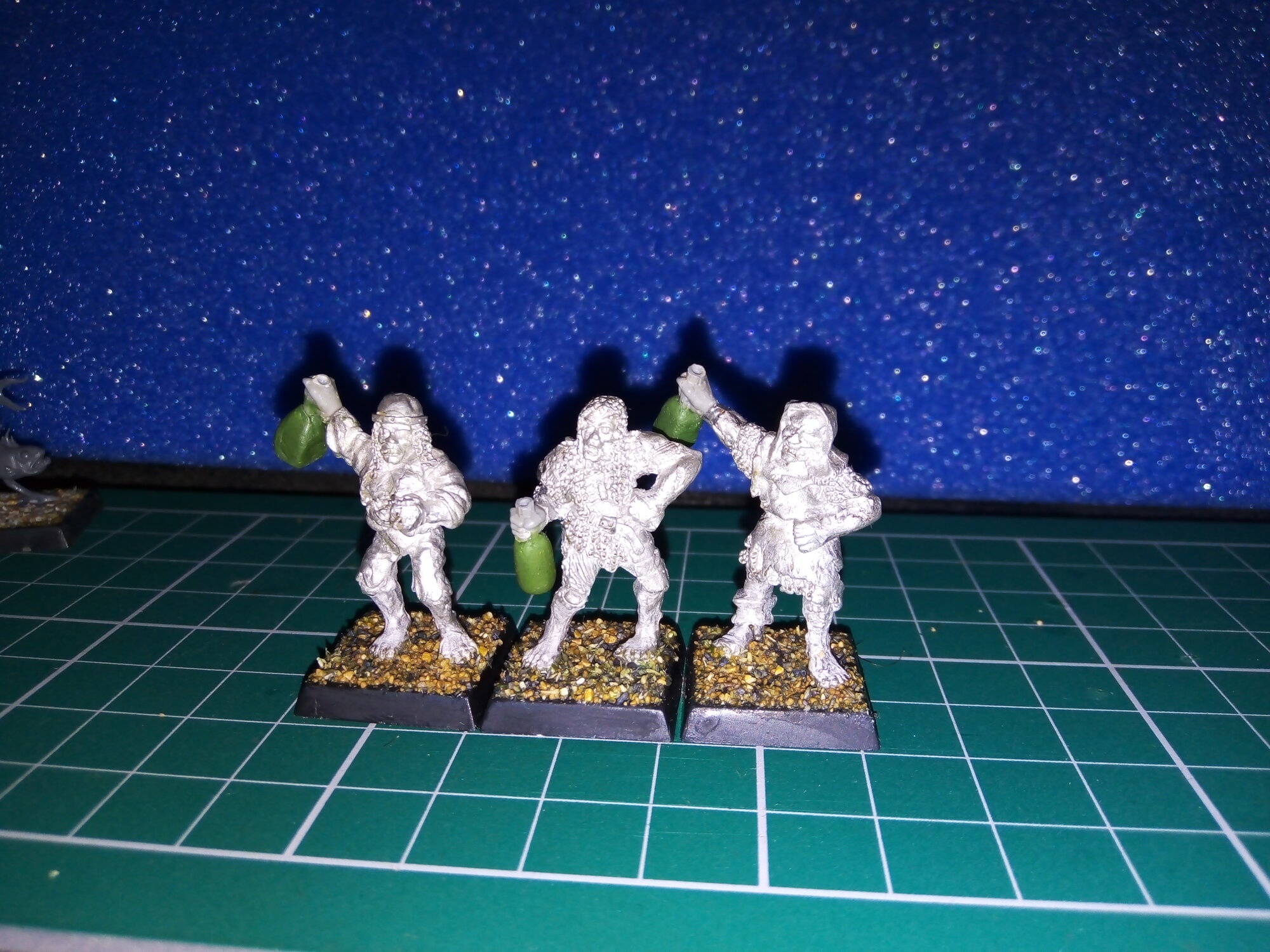 I think I’m done with my entry. I’m at a loss for what else to do with it. I do like how the floor/top turned out. More pics in my comp thread.
View media item 68469
Reactions: Scavvierising, Ben_S, SuboptimusPrime and 6 others

Just in case, here’s my entry! 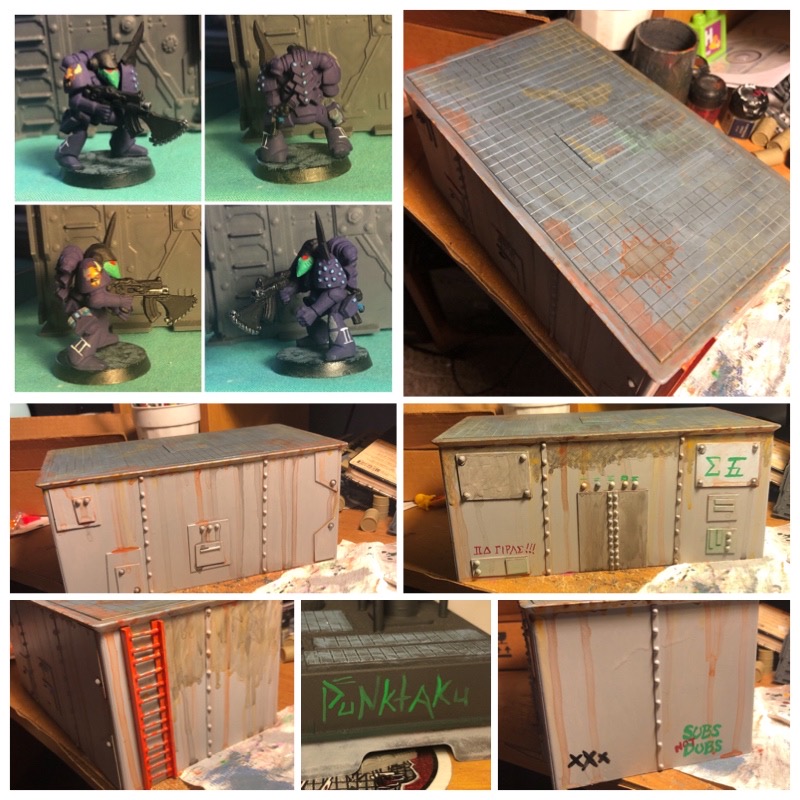 My Yak Comp 40 entry and some fluff to try and tie it all together. 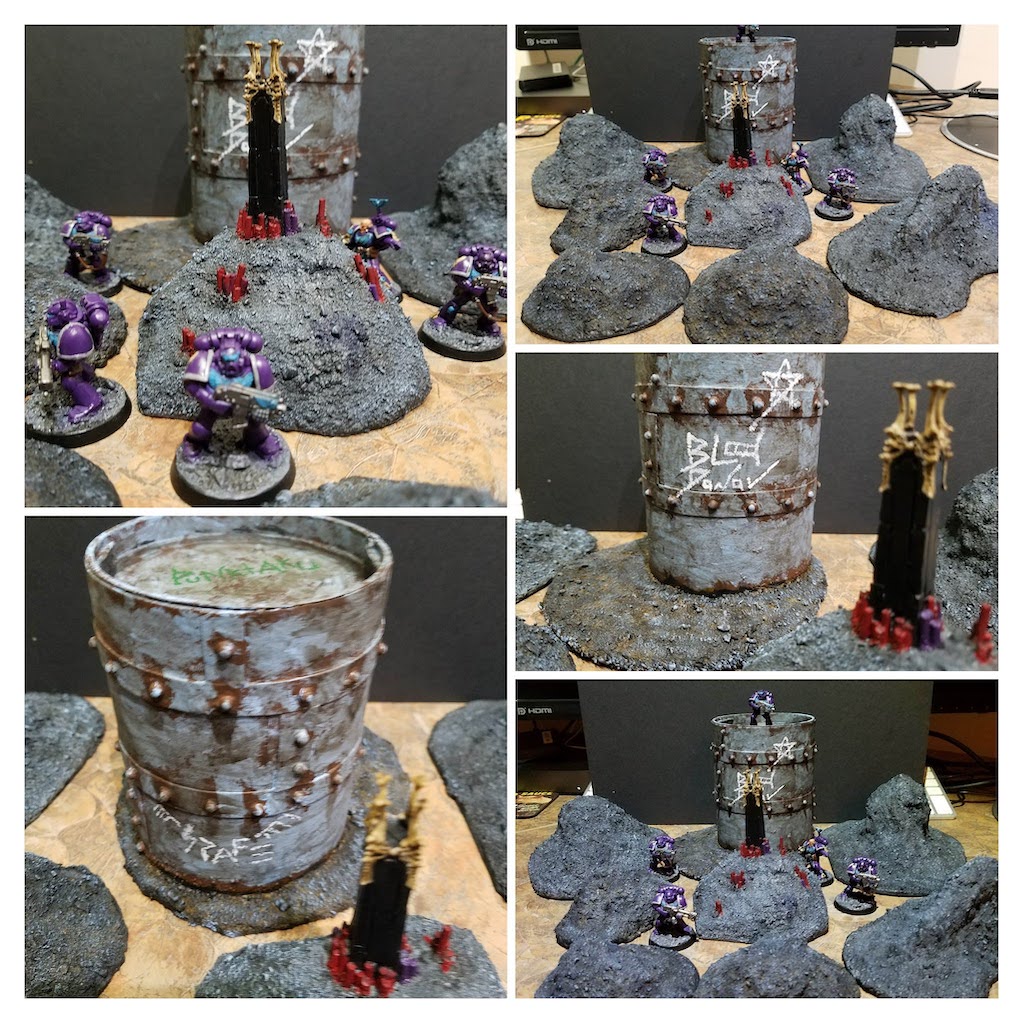 Entry collage.
The memorial appeared over a single night cycle with witnesses reporting a procession of chapter serfs and servitors marching silently to the square before clearing it of all debris. Those who had been living in the space were assisted to nearby container domiciles or “condos” that had been constructed in the preceding days.

Some meters out from the tall warehouse wall that formed one edge of the square was a great rockcrete pad. It sat empty for all of a minute before the first marine appeared and strode across the space carrying a metal barrel upon his shoulder. Reaching the center of the pad he dumped the barrel of ash upon ground, spoke these six words

“From the Fire Wastes of Armageddon…”

Before then retreating to the edge of the space.

And so it continued for the next several hours. A solitary scout pouring out a metal drinking cup of ash, a full squad of marines carrying in a large platform heaped with dust, powder and ash. Mounds began to form on the pad.

Others ventured out to the pad as well.

Small delegations of Guilders.
“From the engine room of the last freighter to sail the eastern sludge sea…”

“From Vent Zeta IV of Hive Acropolis, ash from the great lasgun factotum of sub-level 34xv…”

The Ecclesiarchy.
“From Hive Tenemos the holiest of grit…”

Solitary individuals of various lethalities, Inquisitorial and otherwise, allies of the Yak.
“From a place beyond (and behind) the stars…”

“From the arenas of Commorragh…”

The last pours of ash were still settling in the currents swirling through the square when the first pinpricks of light began to appear high up among the vents and girders that formed the dome ceiling. Solitary sparks drifting down became twos and threes which expanded into great clouds of light spiraling down to hover above the area. Hundreds, if not thousands, of servo skulls with a multitude of augments and tools hovering above the central mound of ash slowly rotating as if to take in the scene and all who watched.

A final marine strode out to stand beneath the great cloud of skulls. It was the Captain of the Danger Company. He had overseen the process from afar, eye lenses glowing through the clouds of steam that arose from his great armored form. As soon as he stood under the mass of skulls he looked up at them and they began to drift down and away as if melting to reveal four massive yak servo skulls each supporting the corner of a platform. On it stood a black pillar crowned with bone.

The platform descended to the ground and the Captain lifted the pillar off and worked it down into the central mound of ash so that only the top half stood clear of the heap.

“From the forge fires of our chapter fortress. Made of portions of the gifts of ash collected by those here today and many, many others we place this monument. We dedicate this space to our fallen brother, Riel, who came from the underhive. We have returned, as we always will, to honor his memory.

Three time winner of the South Mound descent, first to complete the Moguls of Despair and survive the dust leeches that call the base of those drifts home. Winner of the Tri-Dome rally and countless other races before the end of his 20th cycle it was said that he was happiest on ski or bike.”

As the Captain spoke some of the servo skulls had been projecting grainy highlight footage of some of the events captured over the years by chapter skulls, long range scanners and chapter recruits past. Images several stories high projected against walls of misty haze emitted by other skulls faced outwards from the sides of the square. 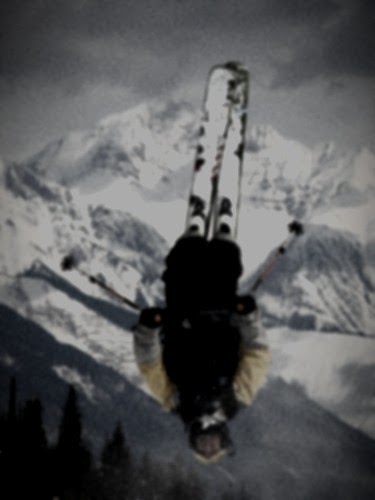 There were even scraps of audio. Asked for any advice he had for younger skyers as the crowds carried him off after winning the Snurrfall Classix he tilted his head and said:

“Skiing is a dance and the ash heap always leads.”

The last bit of footage looked to have come from shortly after his selection for the chapter. Head shaven, first among a line of recruits marching up the ramp of an Arvus Lighter, he looks directly at the servo skull filming. A voice asks what he thinks of leaving his downhive home to serve in the chapter.

“I am of the stars and to the stars I shall return.”

With those words still echoing through the area the Captain turned and leaned over to point his fist at a large cluster of candles set against the side of the pillar. The digi-laser in the gauntlet fired several short bursts and they were lit. As he did so the lights on the servo skulls began to dim as they rose back towards the ceiling while others with candles saw them snuffed out as they passed through the misty image backdrops. The light levels fell quickly until only the Captain stood bathed in the light of several skulls still circling overhead.

“Care for this place. Let no harm come to it. Honor our brother’s memory with silent contemplation. Tributes of ash and effort or the lighting of candles are the only acceptable objects in this space.

We will be watching as we always are.

The Yak is patient. [one stomp]

As the second stomp faded away there was a burst of eldritch light in a circle around the Captain and, like that, he was gone leaving only the candle's glow reflecting off the surface of the pillar and the nearby mounds of ash.
Reactions: Mr. M, Ben_S, Scavvierising and 8 others

Mine is not going well. Seem to have lost all hobby motivation at the moment.

Tiny said:
Mine is not going well. Seem to have lost all hobby motivation at the moment.

You've got this mate, take a step back and you'll find that mojo.
Reactions: Stoof, Scavvierising, Tiny and 1 other person

Going to switch to another project for a bit and hopefully find some motivation. Think I've just got overwhelmed by too many projects half finished.
Reactions: trollmeat and MedMos

I’m with you at the mo @Tiny the struggle is real
Reactions: trollmeat and Tiny
Show hidden low quality content
You must log in or register to reply here.