Competition YakComp 45 - Large And In Charge! 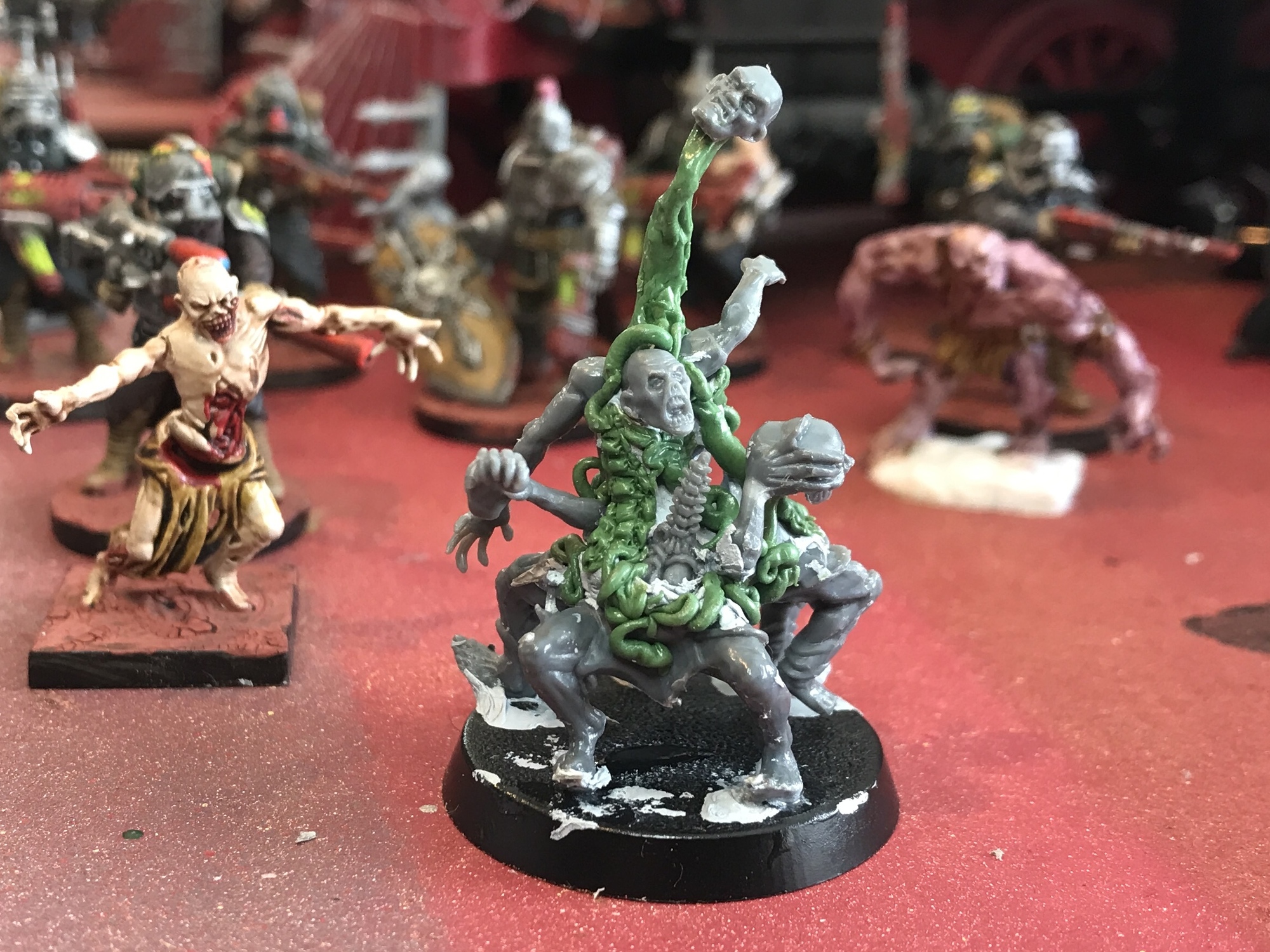 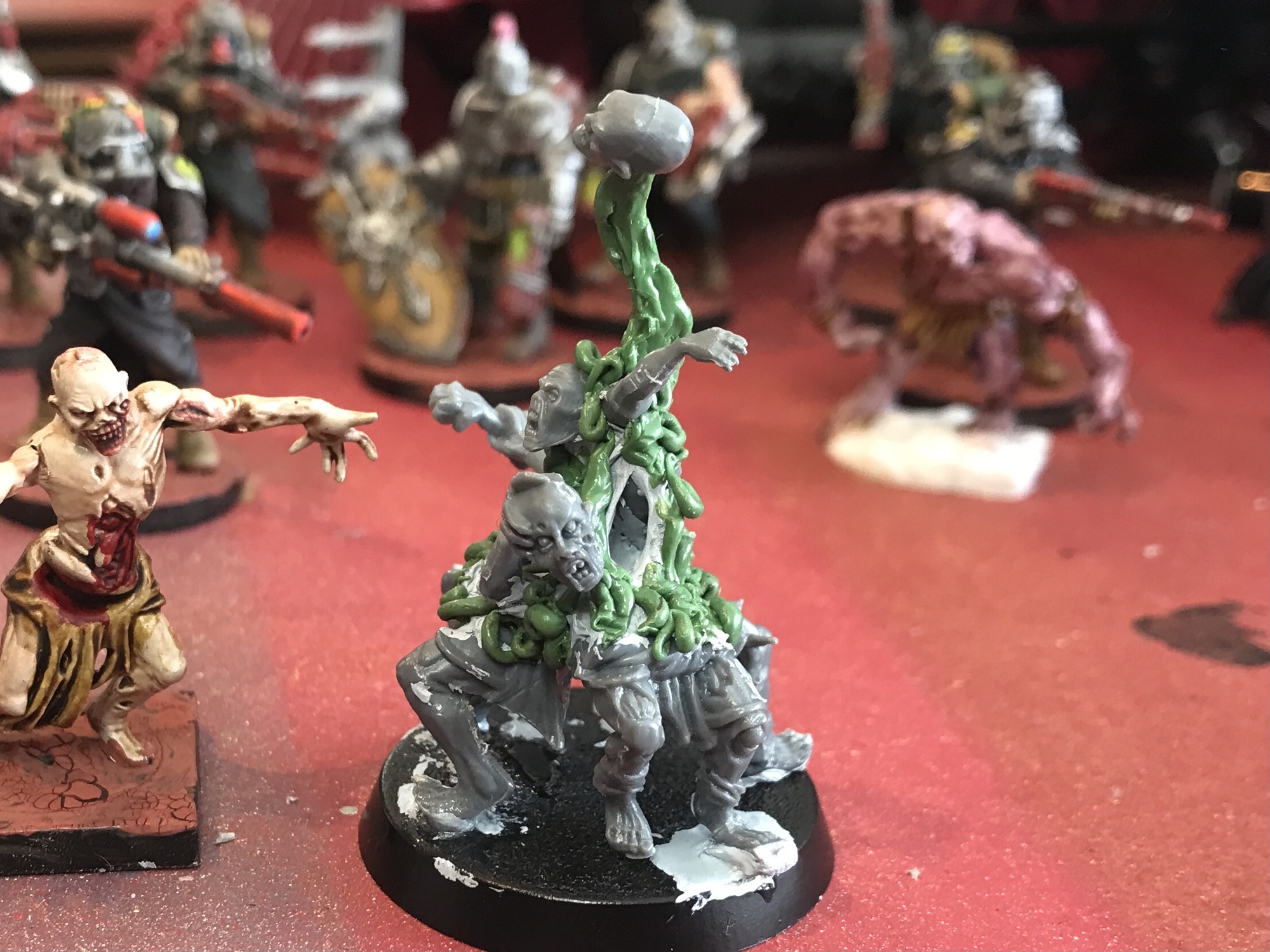 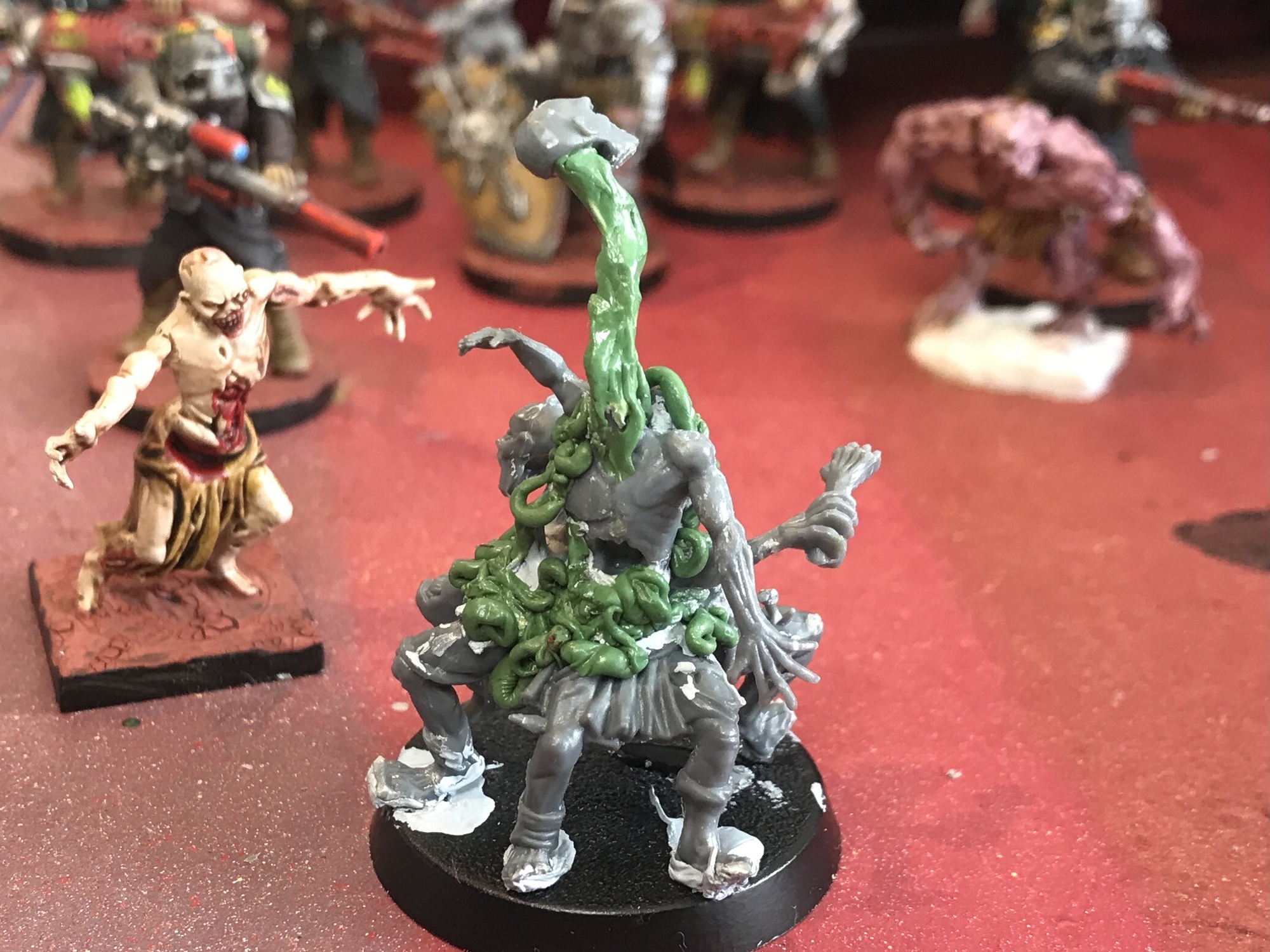 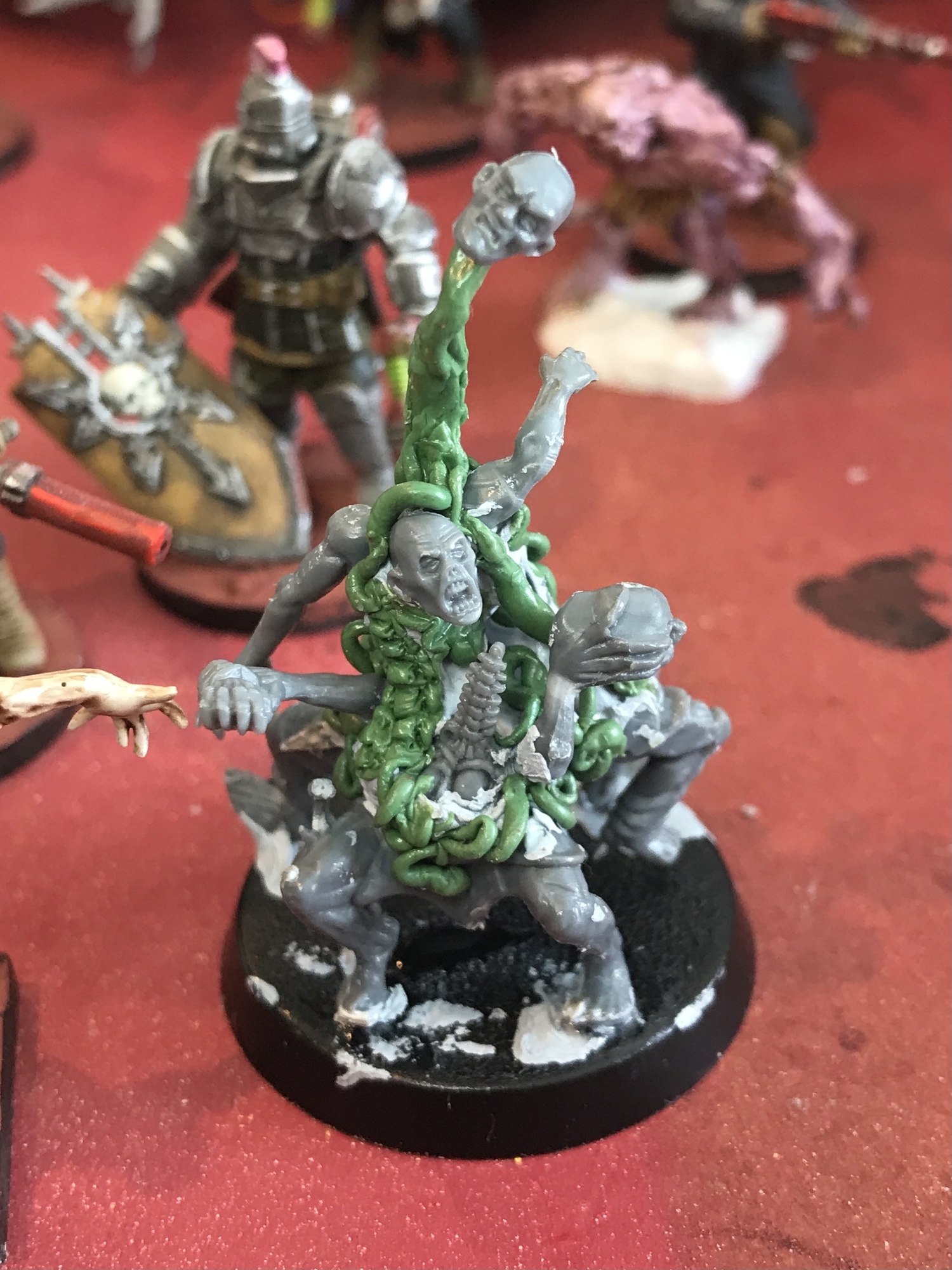 Still open to suggestions on what the Zombie King could be/be leader of.
Reactions: SuboptimusPrime, Ben_S, Stoof and 1 other person

Not sure what he’s leader of but he sure looks pleased to see me.
Reactions: Fold and trollmeat
P

Tiny said:
Not sure what he’s leader of but he sure looks pleased to see me.
Click to expand...

No one refers to the Zombie King as “Tiny” that’s for sure.
Reactions: Tiny and trollmeat

Horrifying boners aside, I had a bit of an epiphany with my entry: 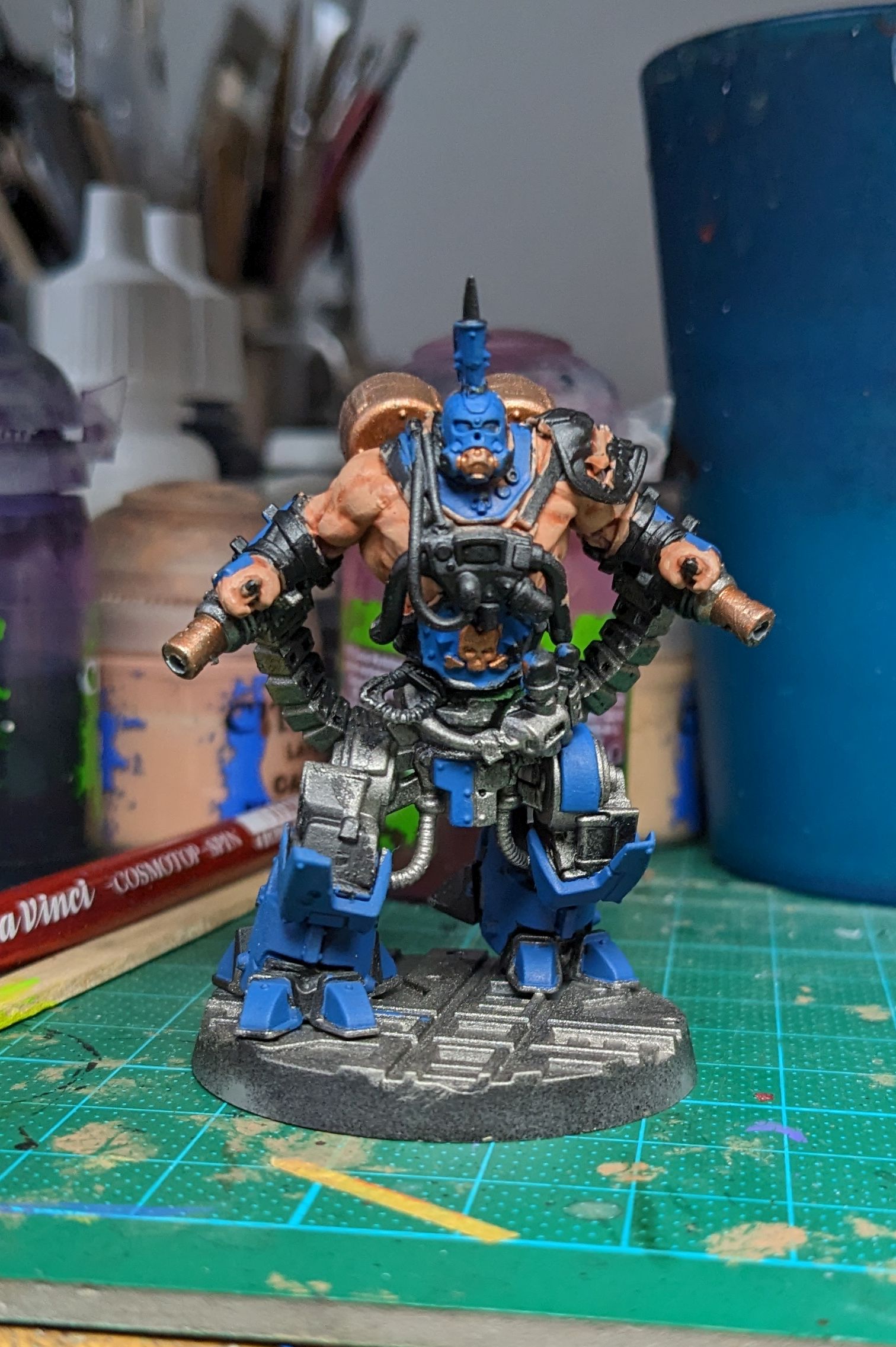 After finally putting some licks of paint on this guy (and repinning him after he came apart when I drilled the barrels), I remembered that Stimmers technically aren't leaders per se. They can "lead" other models via group activation, but they can only become gang leaders if they're chosen after the real boss croaks. Does that still count as an entry then? Because if not, I have another one ready.
Reactions: Ben_S, trollmeat, Biggle_Bear and 2 others

I imagine most would also accept the assault grenade launcher as a heavy bolter with suspensor or a regular, master crafted grenade launcher on a leader.
Reactions: trollmeat, SuboptimusPrime, Mr. M and 1 other person

Sci-fi-ification in progress.
Chainglaive & Stimm slug stash! for the win!

Need to have a go at sculpting some boots, as I can't think of anything worse than bare feet on necromunda! Whether you're in the underhive or the wastes! 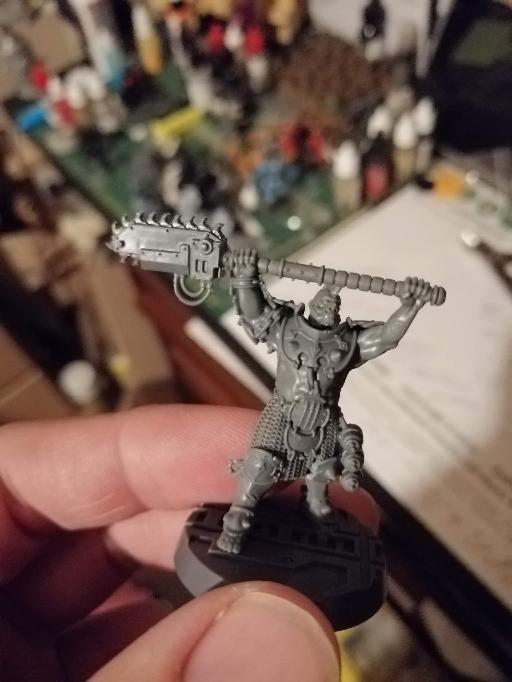 You're off to a good start.

Boots and alternate legs with boots scaled to human, ork and Goliath scale models are what I wish I could buy/make using a 3D printer.
Reactions: Spenetrator and trollmeat

Maybe someday you’ll be able to put a mini into a 3D printer and print stuff right onto the mini.
Reactions: Fold, trollmeat and Mr. M

So much progress on this thread and all I managed was to pick some base parts and realise that 4 tubes of glue dried up simultaneously.
Reactions: trollmeat and Pagumb

First port of call was removing some of the excess of spikes on the armour plates of the Slaughterpriest. I then stood him among his mutie followers, and that's whenI realised quite how BIG the priest model is. 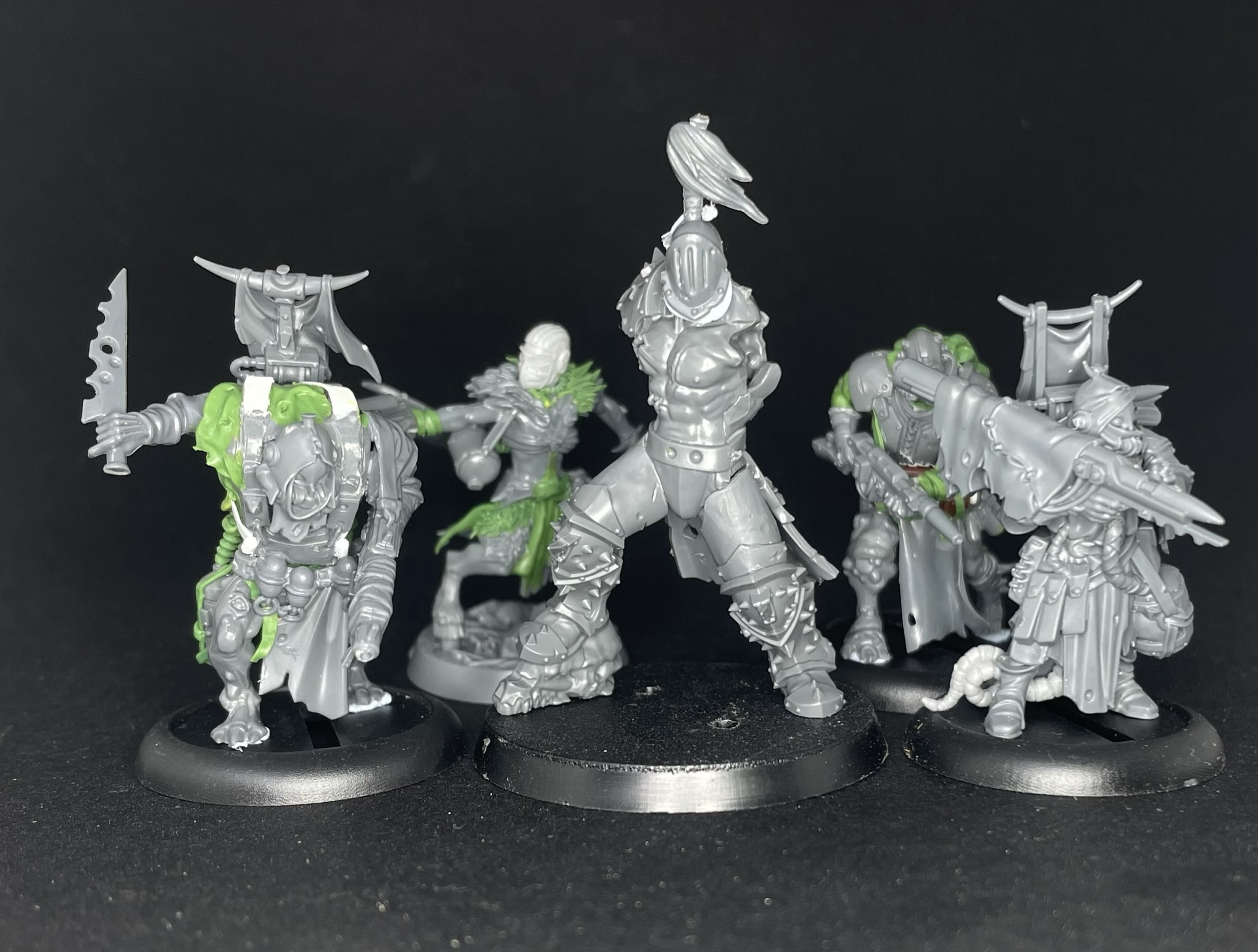 I know it's supposed to be large and in charge, but even so this seems like overkill.

So I removed the thick belt from the waist, saving 2-3mm, and trimmed a little more height from the boot and rock. Then I thought if I can't make him any shorter, I can at least make him appear shorter by having him bent over further - hence the new more aggressive direction I'm going with the pose which I'll call "the bull charge". 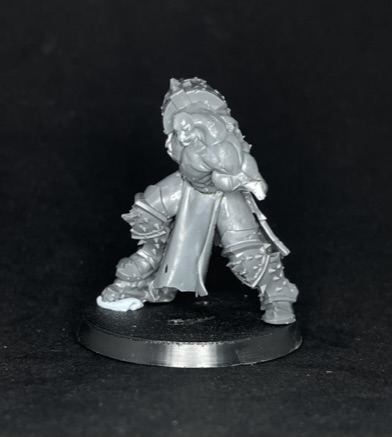 Other than adding a tattered loincloth, that's where I'm up to now.
Reactions: Mad Robot, Biggle_Bear, Spenetrator and 7 others

I feel like I'm behind already... Found some bits for my pit slave chief. I'll have to find a claw and a chainsaw, or scratchbuild them. I can hopefully get to cutting and glueing soon! 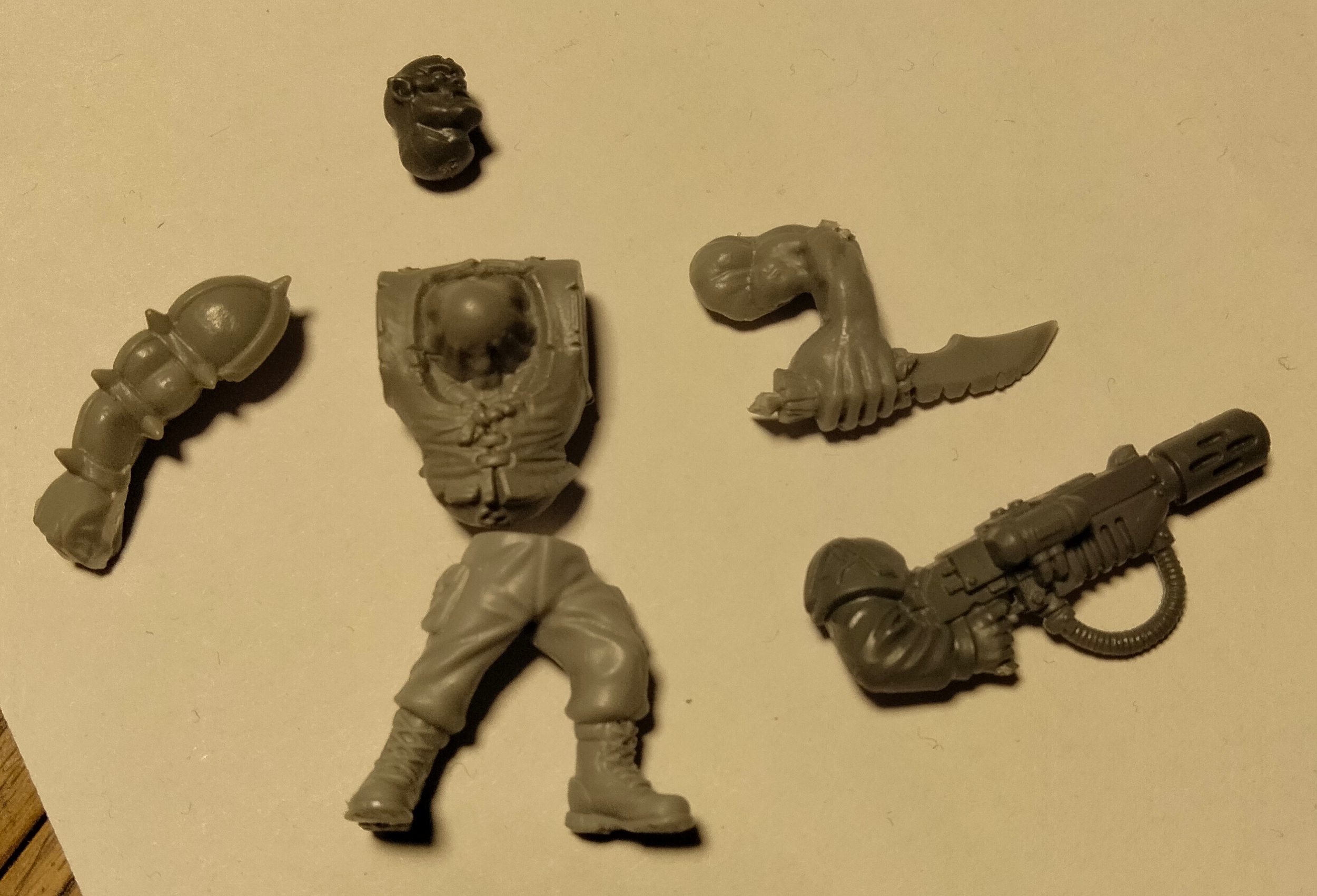 Large and in charge bits

For a Pit Slave Chief with Meltagun, claw and chainsaw.
Reactions: Mad Robot, Mr. M, Biggle_Bear and 4 others
P 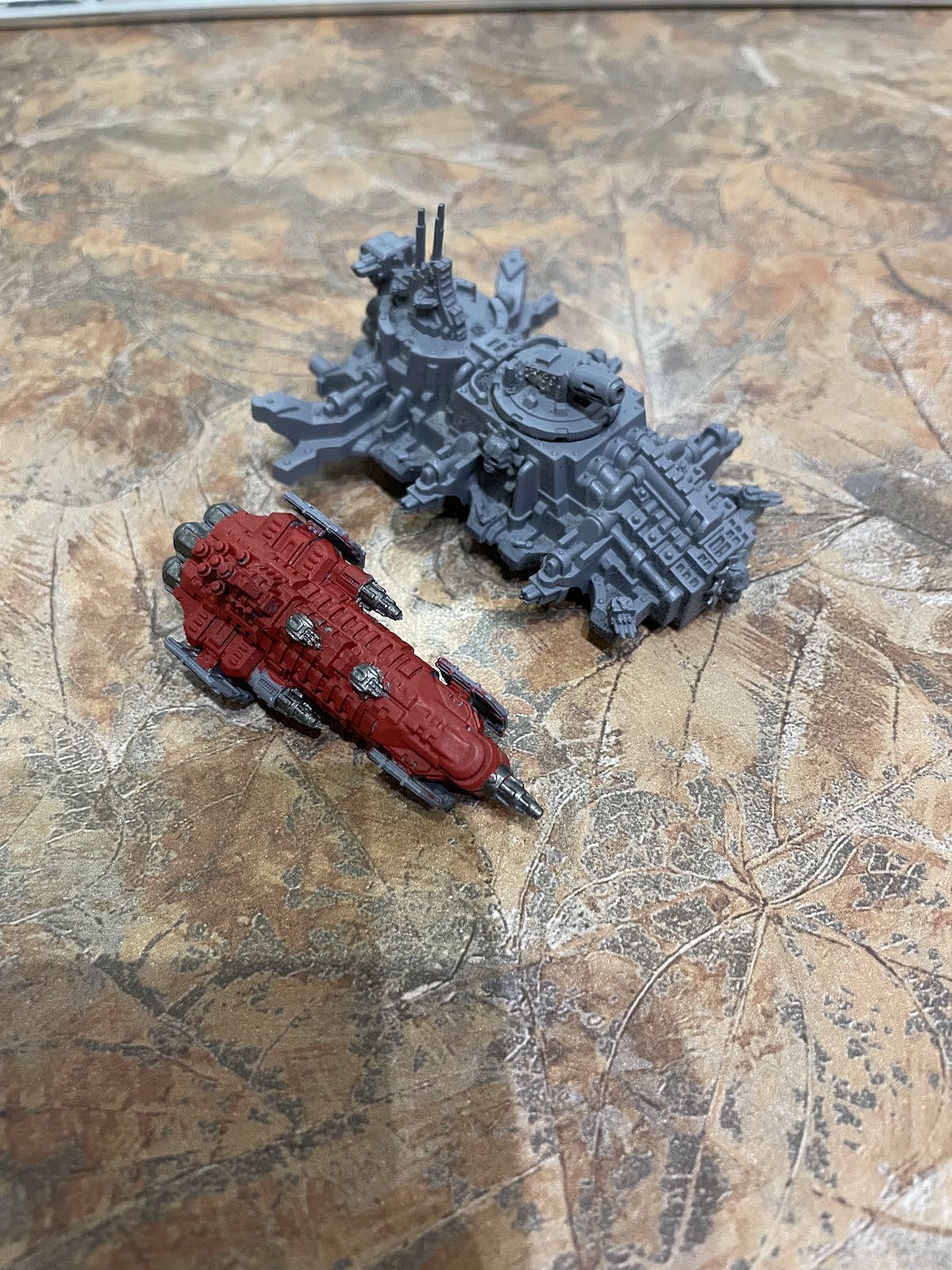 A Slave Ogryn leader in counts as carapace. Not sure if I could make the longer legs work but it would make for an eye catching silhouette: 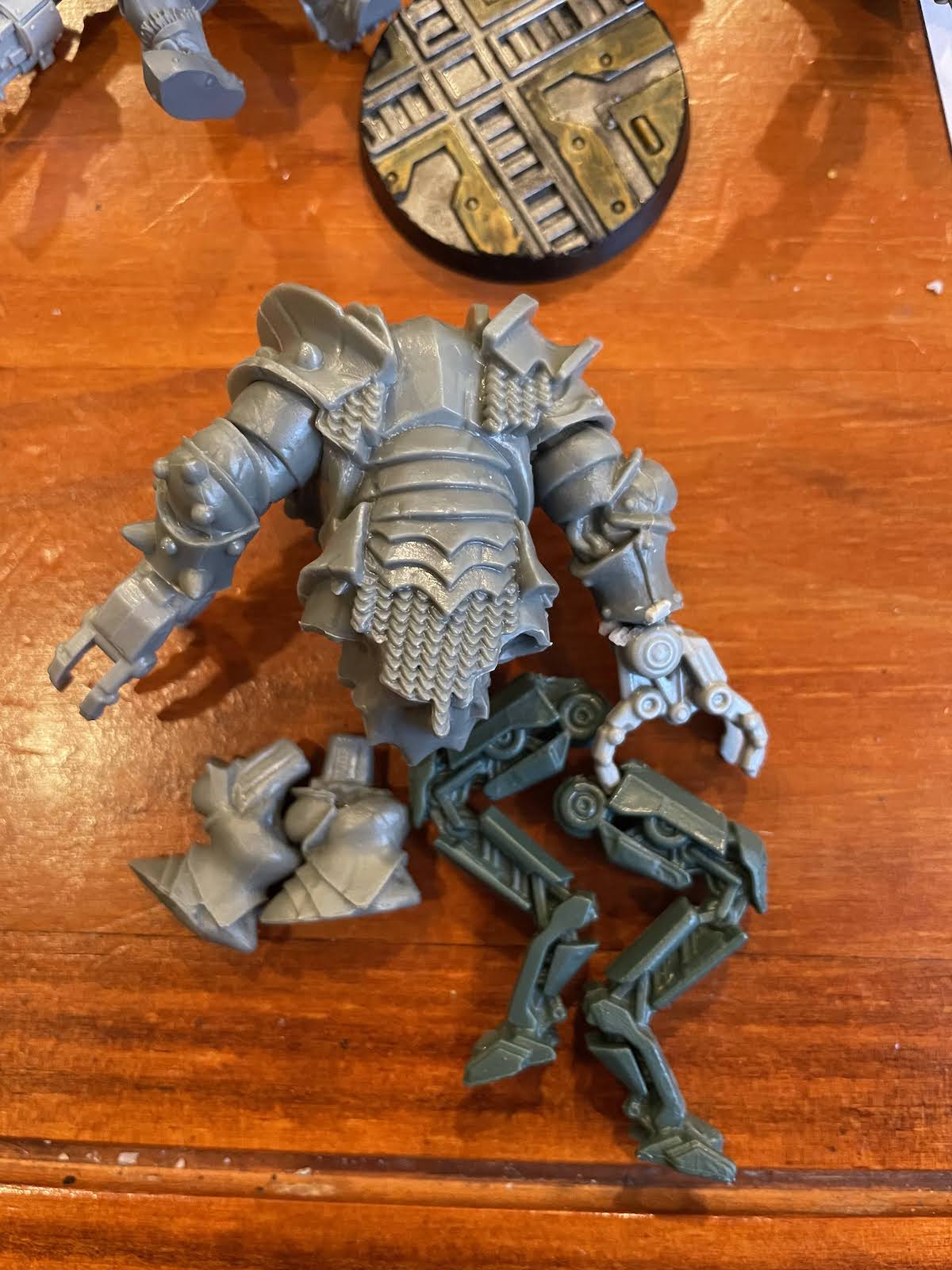 I'm in, now work has settled down again following the madness that was Christmas and New Years.

I've made a simple start. 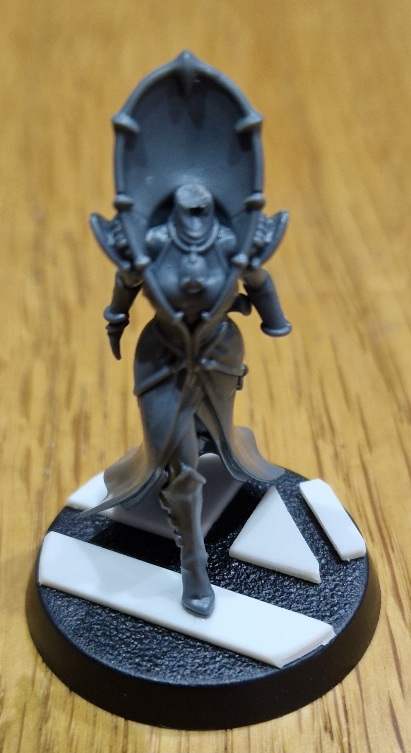 Hopefully the build will be finished tonight so I can procrastinate painting for a few weeks.

WIPs will probably end up over here
Reactions: Biggle_Bear, MedMos, Tiny and 6 others

Did some piping from the stimm-slug-stash to the respirator the other night. Started putting down the soles of his boots. 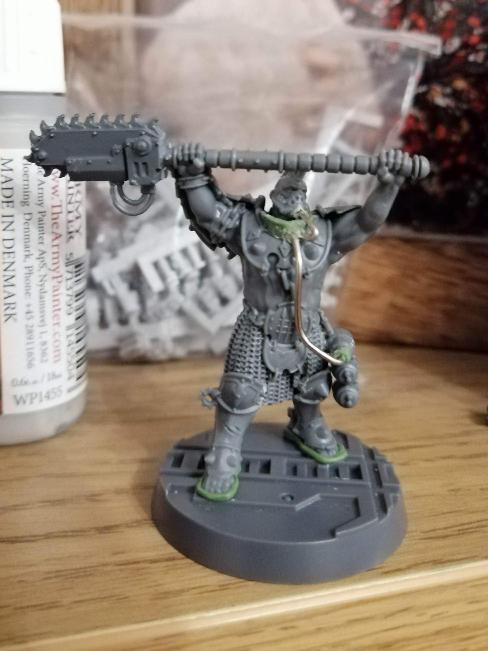 seeing some of these other beasts coming to life, and next to the Zee Cult champions I’m working on to go with it,I think my Zombie King may not be Large and In Charge enough. Might have to demote this one and build a biggun. 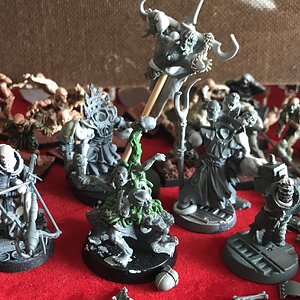 Oh, the fickle winds of chaos…. From large and in charge to lowly spawn before he even hits the game board…
Reactions: Mr. M, MedMos, SuboptimusPrime and 2 others

Didn't we establish a few posts back that his size and strength were in the, err, details?
Reactions: trollmeat

The Secretary to System Governor Hestus DeTrana Silvus looked up from the report he was holding as the Governor strode into the anteroom. He was, as usual, wearing his full dress uniform. Spotless and resplendent with golden braid, medal ribbons, the jewels of various orders, and of course his heavy, solid-gold chain of office. All neatly tailored over his corpulent form.

“Ah, My Lord, you’ve returned from your meeting with those Tau fellows, did it go well Sire?”

The Secretary paused for a second, and continued:

“I have a report from the monitoring station about those ships I mentioned dropping out of the warp in the outer reaches, if you’d care to take a look…?”

Governor Silvus glanced briefly at the paper and rolled his eyes.

“Very well. I shall surmise it for you. There are three ships, all Imperial patterns” – so far no reaction, ships coming in wasn’t that unusual, even out here in the Pergamon sector – “One of unusual configuration, the Cogitors took a while to work out it was an Armageddon class Battlecruiser…” – a slight furrow of the brow, quickly controlled. Something the size of a Battlecruiser was unusual.

“The other two are more our usual fare – Light Cruisers. Endeavour class. Lots of gun batteries apparently. The names are interesting…” - the Secretary struggled to fight the smirk tightening the corners of his mouth – “The Light Cruisers are showing up as the Witness and the Pursuer. The Battlecruiser is called the Final Judgement.”

There it was, the slight twitch of the eye, the flesh of the face going from unhealthy, blotchy pink to an even less healthy pallor.

“The cogitors didn’t have any trouble referencing those names, apparently the organisation they belong to have a pattern of ship names – watching, evaluating, chasing… sentencing…” 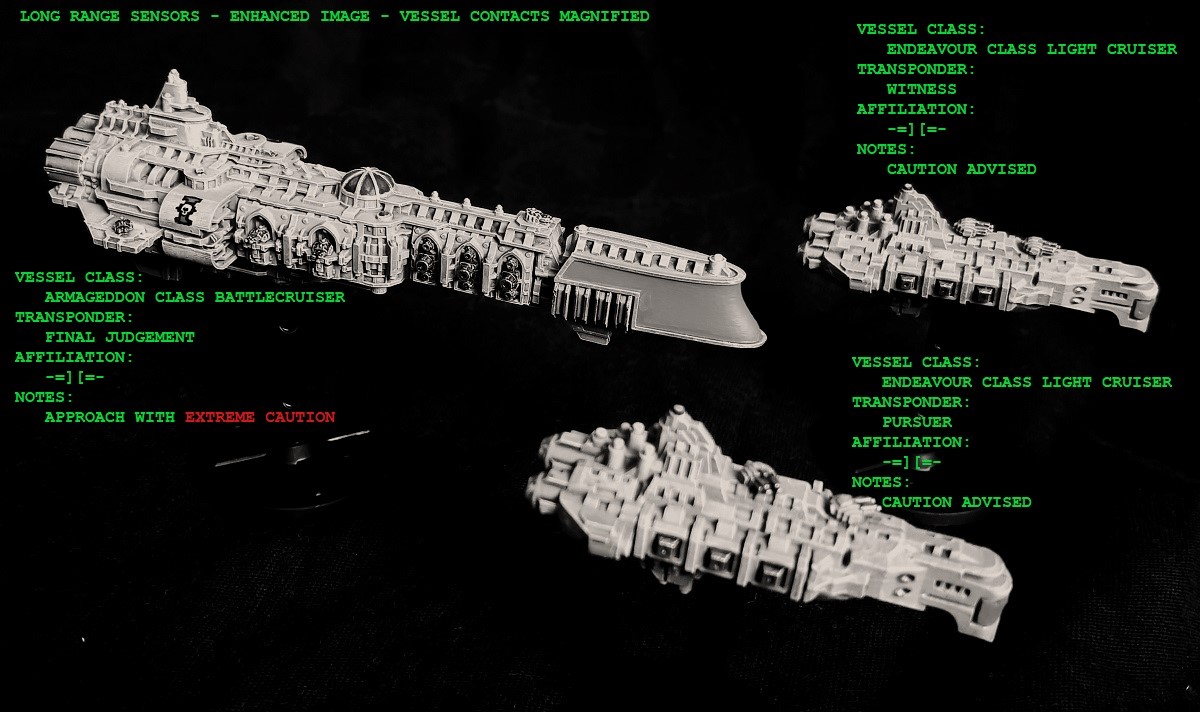 “I’m sure the Holy Orders of the Emperor’s Inquisition is just visiting of course. Perhaps here to ratify your new trade deal with the Tau! After all, you haven’t personally organised anything heretical, of course! There was that detachment of Imperial Guard you assured us were traitorous and had annihilated – all good there. And naturally it was quite right that the planetary defence budget be cut to pay for this palace – and it is a lovely palace – and those tithes you’ve been arranging with that Governor Skerkzes – the fellow who has that star tattoo on his cheek and all those rather unkempt palace guards – those are, of course, all above board. After all, you assured us it was so, and personally signed the documentation.”

The breathing was shallow and rapid now. The Governor slipped his hand to his collar, and popped it open roughly. One gold and diamond button tinkled to the black marble floor.

The quiet was broken by a gentle but insistent pinging. 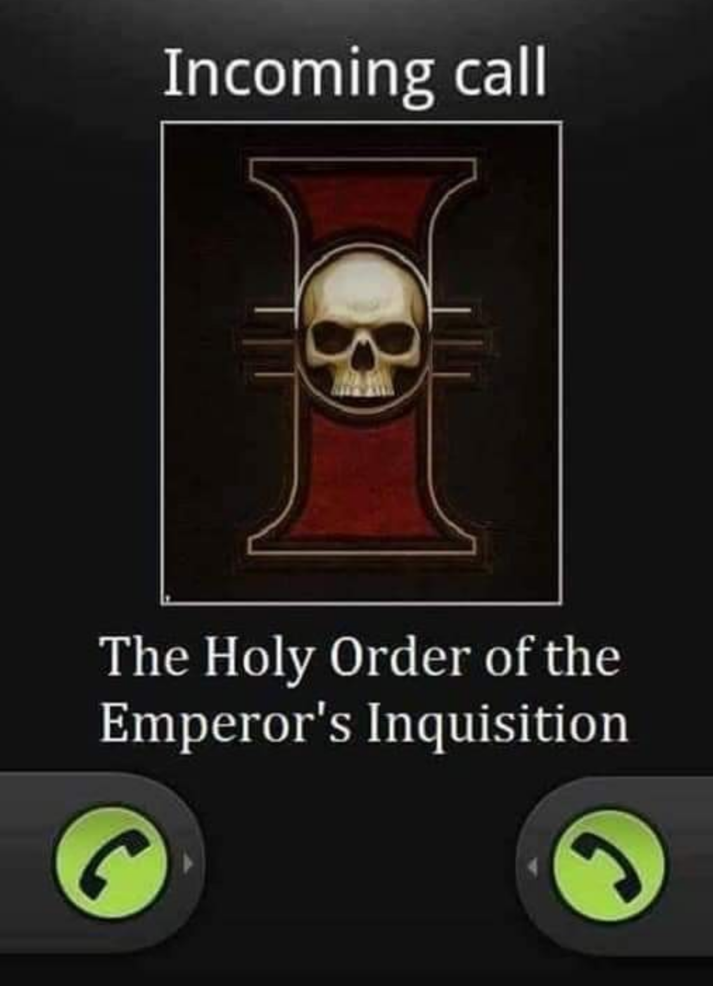 “Ah look, an incoming long-range transmission, patched directly here – look at that. Shall I put it through to your office…?”

The Governors hands spasmed slightly as he undid the flap on his heavily embellished ceremonial holster and drew the damascene and pearl emblazoned bolt pistol. He strode towards his office with it dangling from his hand as he pushed the door open.

“Ah! Yes, give them the impression you’re doing some target practice! A good idea – they’ll see you as a prepared man, a man ready to defend his Governorship from the hazards that beset the imperium! That will please them!”

The Governor slowly closed and locked the door behind him with a gentle click.

“I’m afraid His Excellency Governor Hestus DeTrana Silvus is… indisposed at the moment. How may I help?”


I present to you the Final Judgement, WItness, and the Pursuer - Battlecruiser and Light Cruiser escorts of the Inquisition fleet. 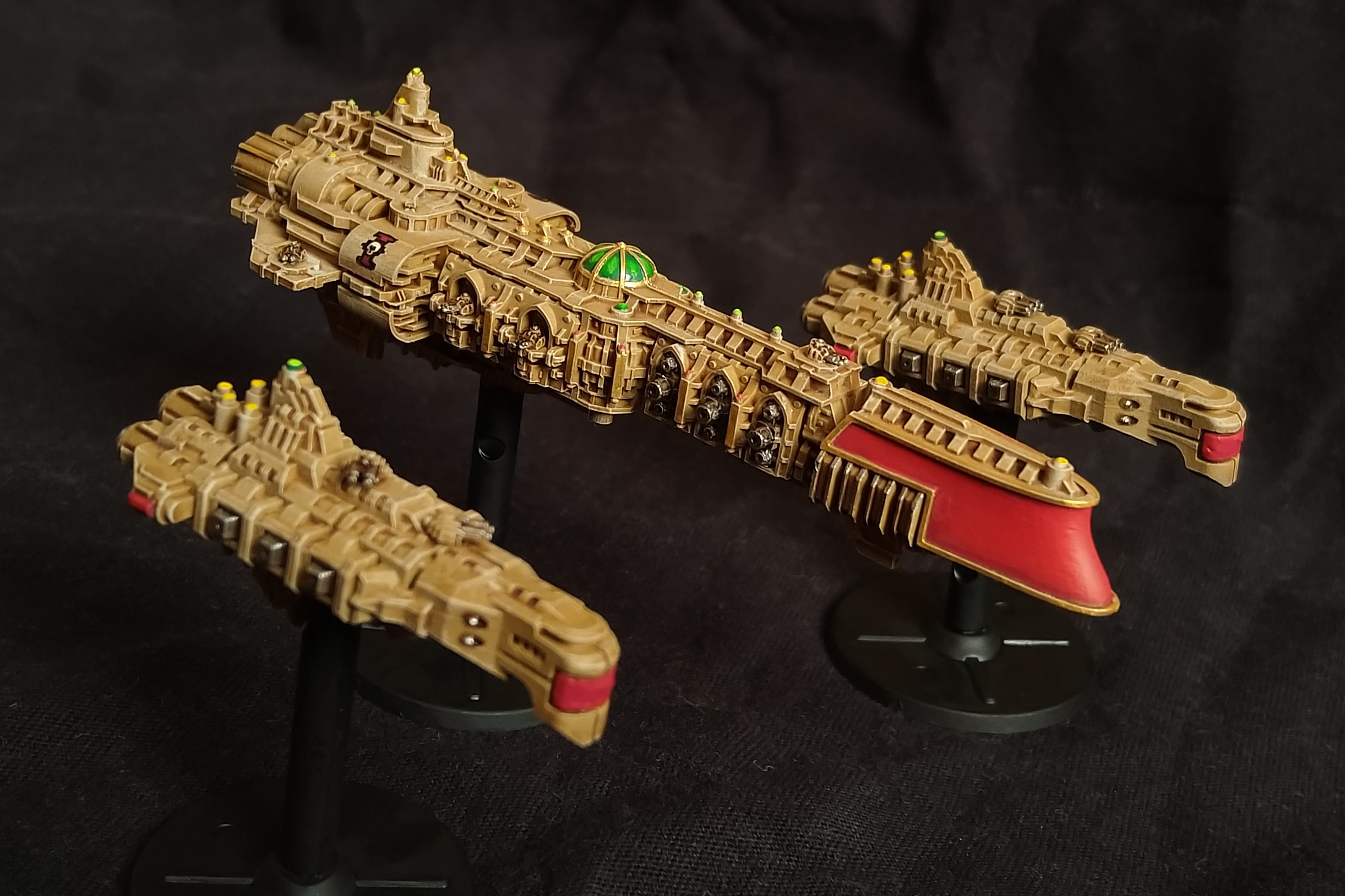 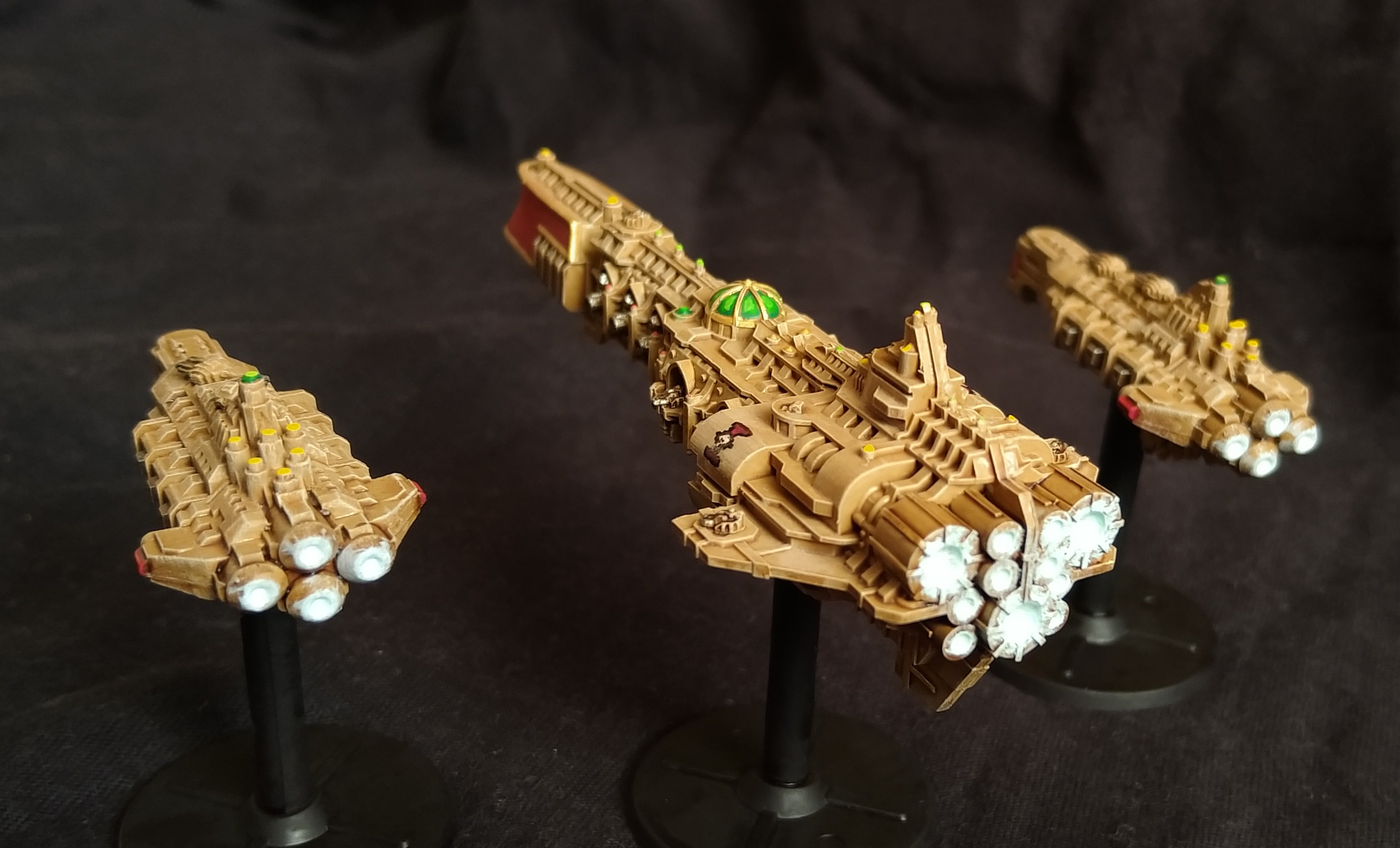 Reactions: timdp, Biggle_Bear, Punktaku and 9 others
Show hidden low quality content
You must log in or register to reply here.