Amazing stuff. It's great to finally see what people look like as well - totally different to what I had imagined though.

I'm definitely coming next year.
Reactions: Ptrix, CaptainDangerous, The Duke and 2 others

RobStrachan said:
It's great to finally see what people look like as well - totally different to what I had imagined though.
Click to expand...

@The Duke count me in for the purge, I'll be there in 30mins
Reactions: Ptrix, The Duke and Llewy

CrazyJaws said:
@The Duke count me in for the purge, I'll be there in 30mins
Click to expand...

No rush pal, it starts at 2. Looking forward!
Reactions: CaptainDangerous

I left my sunglasses there yesterday! Did anyone pick them up?
Reactions: The Duke and RobStrachan

Fold said:
I left my sunglasses there yesterday! Did anyone pick them up?
Click to expand...

Yep they're here we'll leave them with the magic madhouse guys?
Reactions: spafe and Fold

Truly awesome guys. Hopefully this is start of a regular event for the Tribe!
Reactions: CaptainDangerous, spafe, Blood Donor and 3 others

cardyfreak said:
Truly awesome guys. Hopefully this is start of a regular event for the Tribe!
Click to expand...

Llewy said:
Yep they're here we'll leave them with the magic madhouse guys?
Click to expand...

Well, all caught up on this thread... Was cracking day on Sat, So gutted I missed the Sunday rumble too!

I'll put some pics up once I work out how to transfer them from phone to computer.

A few things I've learnt from this weekend:

@Llewy has mad skills at board making, scenario writing, and generally being a true gentleman
@The Duke has a real Architects flair for setting up boards (as he swiftly made my hamfisted attempt at terrain look a lot more respectable, but being a geratic forgot he'd left the bath running meaning we had to fight on a sea of goo!), also a gent!
@Oliver & @heldantes are not cut out for the life of gang warfare... both earning the ignoble peace prize for their pacifist natures... they genueinly seemed to feel bad about shooting you in the face... don't worry, we'll get that out of them yet!
@Jaws has stunning minatures... looking through his case... it's clear he jsut needs to move to London so he has time to play with more gangs and let them see table time!
@Fold did a great job keeping everyone organised, and I'm sure all rumours of bribing the painting judge are just slander put out by those jealous escher who dont like seeing good honest muscle win! (well deserved win btw!)
Oh and one final thing... @Alobar sucks!

Was awesome guys, really looking forward to next years, and thanks to everyone who made it, was cracking!

Bat reps maybe to follow... and map updates later in the week too
Reactions: Ptrix, ThreeDice, Fold and 6 others

I've dumped the few pis I managed to take into the Yak gallery too.
Reactions: Ned Noodle, CaptainDangerous and Llewy

The Duke said:
In other news, we had one of the super-keen staff judge the "Best Gang of YakDay London" competition too - which was deservedly won by the excellent "Hive Bastards" Goliath gang that @Fold had brought along - some fantastic details (5-o-clock shadows on the bald heads and chins!) and vivid colour scheme, some fantastically characterful compositions and conversions and really fantastic attention to detail on the basing too! - not to mention the always hilarious Goliath names (the juve "Fist-punch" stood out as a particular favourite of mine)

Here the "War bastards" are in all thier glory: 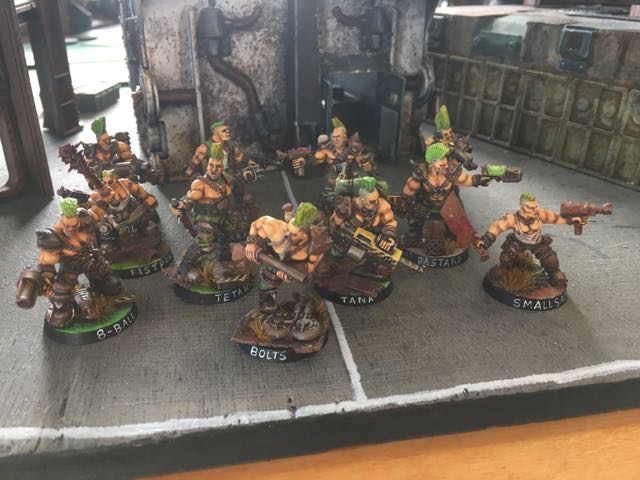 Thank you The Duke! Personally I think I was lucky to win with such stiff competition and I was sure your Ratskins would take it. If anyone does want some close ups, they are on my blog - kitbashed goliath gang. I was going to refer you to my Yaktribe modelling thread but have just realised most of the photos there are on photobucket so some maintenance is required to sort that out.

Did you capture photos of the other entries? All the gangs lined up on Llewys terrain looked magnificent and it would be cool to share those photos too.
Last edited by a moderator: Oct 30, 2017
Reactions: CaptainDangerous, The Duke and spafe

Fold said:
I was going to refer you to my Yaktribe modelling thread but have just realised most of the photos there are on photobucket so some maintenance is required to sort that out.
Click to expand...

This should solve itself once I moved to the new site/server and I run the script to download all the thread images to YakTribe instead of hotlinked from 3rd parties.
Reactions: The Duke and spafe

Catching up on the pics and reports today, too busy during work. Fantastic photos, thank you for recording the events and taking such great shots! Looks like you all had a great time with some truly excellent gangs, terrain and scenarios.

Can't believe you had a sea of goo lol.
Reactions: CaptainDangerous, Llewy, The Duke and 3 others

Contrary to the constant admirable scouring of both this and the London YakDay threads, I only today realized @Alobar had made a shirt for the event. It now makes me chuckle every time I see it
Reactions: CaptainDangerous, Malo, Llewy and 2 others

It was a clever move on @Alobar 's part @Blood Donor , made it very easy to tell who he was (as if folk needed reminding ).

I think I may invest in similar for next years event...
Reactions: Blood Donor, CaptainDangerous and Llewy

@The Duke sorry about the image uploader and single images. Since the flash one was disabled, I wasn't going to pay for updates to the current plugin when I've already purchased the new official one on the new site. So easy multiple uploads will return soon
Last edited: Sep 12, 2017
Reactions: Tiny, spafe and The Duke

Malo said:
@The Duke sorry about the image uploader and single images. Since the flash one was disabled, I want going to pay for updates to the current plugin when I've already purchased the new official one on the new site. So easy multiple uploads will return soon
Click to expand...

Not to worry - I muddled through.... that'll be nice tho, when its back! - thanks @Malo you're a ledge!
Reactions: spafe

Posting here as well in case folks aren't keeping up with the main announcement thread. T-Shirts celebrating TribeMeet 2017 are available for a limited time, with a discount for the store opening available until the 18th.

Just caught up on all the shenanigans at yakday London and it looks like you guys had a total blast!
Amazing models and terrain, great events and by all accounts a great bunch of yakkers, well done my southern brothers. And props to @Jaws for going the extra(however many) miles to attend, that's true dedication to the tribe.
Congrats to @Fold for bagging best gang amongst all those other amazing gangs. Looks like you and me will be stepping out in style thanks to this awesome community.
Also Congrats to anyone who got involved in the day and bring on Tribemeet 2018!
Last edited: Sep 14, 2017
Reactions: CaptainDangerous, Jaws, Llewy and 5 others
Show hidden low quality content
You must log in or register to reply here.