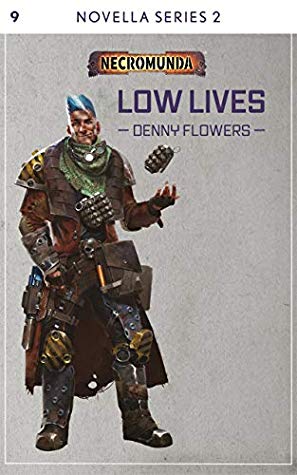 Even in the nightmare depths of the underhive, there are heroes… or at least those who'd like to be heroes. Caleb Cursebound is one such soul, but pursued by bounty hunters and desperately outgunned, can he even survive, let alone prove his worth?

Enjoy an outrageous tale from the underhive starring a larger-than-life character who's in over his head.

Caleb Cursebound, the Underhive’s ninth-most-dangerous man, and his ratskin partner Iktomi are in hiding, having deposed the tyrannical lord of a Necromundan noble house. Pursued by relentless bounty hunters, the pair descend to the remote mining settlement of Hope’s End, the last place anyone would think to look. They soon learn, however, that all is not well in Hope’s End; the people are being terrorised by a powerful Orlock gang, and in desperate need of a hero. Caleb cannot resist the opportunity to prove himself, but there are those who would see his reputation forever tarnished…

This one was fun. It was neat seeing the regulars of a house and seeing their views of the gangs.
Read more…
Top Bottom