No permission to download
You are using an out of date browser. It may not display this or other websites correctly.
You should upgrade or use an alternative browser.
Overview Updates (1) Reviews (12) History Discussion
The NCE is a fan update to the official Necromunda rules with three main aims. To better balance the weapons and skills alongside minor tweaks to improve general gameplay. To clarify ambiguities and patch up rule holes. And finally to introduce select new equipment and scenarios that conform with the spirit of the game and add variety.

All changes to the official rules are marked in red.

You can follow development of the project and post suggestions in the NCE discussion thread. Previous discussion here. 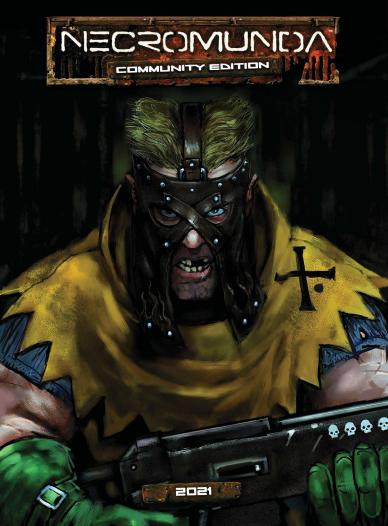 I wish a community version could be created combining outlanders in one rule set, but maybe I expect too much! ;)
Upvote 0 Downvote
I'm going to have to disagree with the other reviews and say that this edition doesn't quite yet work for me in matching the spirit and atmosphere of the original rulebook.

No doubt, the balance tweaks are a good thing, along with numerous other alterations to improve the game.

But the neglect (to date!) of Outlanders in NCE means that I'll still be turning to the ORB for any campaign that I run myself!

As this is a work in progress I look forward to the revision which satisfies me and I can retire my cherished (but battered) copy of the ORB hardback.
Upvote 0 Downvote
The pinnacle of necromunda rulesets, this edition has cleared up much of the nonsense and bizarre quirk of the original rulebook. You probably didn't notice at the time if you were a kid playing, but as you grow older you see a lot of the clashes and imbalance and can struggle with some of the wording. This version clears much of that up, re-introduces the awesome catch fire rules, balances the skills table to a much more satisfactory entity, and my personal fave; makes the autogun a viable option by simply reducing the range of the las gun slightly.
The Necro players ruleset, this is written by Necromunda fans, for Necromunda fans. It stands on the shoulders of its giant predecessor and makes an already awesome game even more. Awesome! And it's freeeeeeee!!!!
Upvote 0 Downvote
Read more…
Top Bottom