The Legend of Phanta Claws 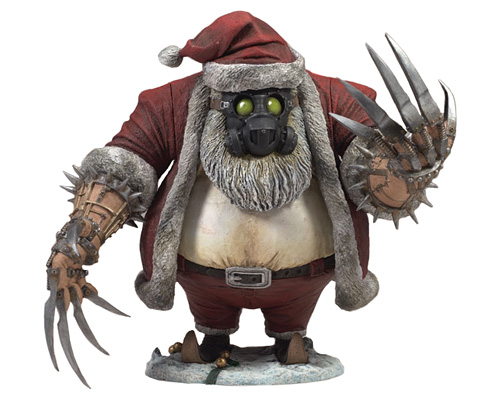 Abror "Hammerfist" Flintor laughed as he tore his chainsword across the chest of his opponent. The pathetic attempt of the Delaques to break through into the Goliath encampment was almost disappointing- he'd been looking forward to a good scrap. Yet still they carried on fighting, as though they honestly believed that they could best Flintor and his men. Just as Flintor was preparing to charge the remaining Delaques and finish them himself, he heard a bestial snarl and turned to see a monster of immense proportions leaping towards him, claws outstretched.

Thinking quickly, Flintor raised his chainsword just in time, shielding the talons from tearing into his face. The mutant fell to the ground but rose again in an instant, blocking the chainsword Flintor swung towards him with supernatural ease. The monsters counter attack was swift and ferocious, forcing Flintor back as he desperately tried to defend himself. The creature's talons ripped across Flintor's leg, causing him to yell out in pain, and knocking him off balance. He fell, leaving the mutant towered over him, preparing to deliver the killer blow. In a last ditch attempt to save himself, Flintor rammed his chainsword past the mutant's claws and straight into its exposed belly. His feelings of elation quickly turned to despair, as the mutant glanced down at the chainsword forced into its abdomen before flinging it away effortlessly. Before Flintor could react, the fiend's claws plunged into his neck, and he felt his life force ebbing away. As the monster stood triumphant, Flintor got his first proper look at his killer, resplendent in its red cloak with white cuffs and with a bobbly hat adorning its brow. Surely it couldn't be... it couldn't be...

With a feral snarl, the Phanta Claws wrenched its claws out of the gang leader's neck. With the death of their leader, the Goliaths faltered and ran, leaving their encampment unguarded. The Phanta Claws smiled a murderous smile as it thought of the material rewards and human prey that lay in the valley beyond.

Phanta Claws was coming to town...

Happy Holidays from the 'Tribe!